The New York Times. Read the story.
Find out how to use the Bureau’s work

It was two days after the surgery that the doctors first noticed the smell. They had patched up the bullet wounds in the 22-year-old college student’s leg, which had shattered bone and torn a hole in his flesh. Now, the wound was emitting a distinct odour, described in the medical literature as “offensive”. It strongly suggested a bad infection, perhaps life-threatening, and it was not getting better.

Realising that the normal antibiotics were not working, the doctors at the Médecins Sans Frontières Trauma Centre in Aden sent a blood culture for analysis with MSF’s microbiology lab. The centre opened just last year, the only one of its kind in the region with high-quality equipment that can detect multi-drug resistant infections. The result was a Gram-negative bacterium, Acinetobacter baumanni, which was resistant to most standard antibiotics. Nobody knows how the student - known as AS to preserve his anonymity - acquired the infection, but it is so common in Yemen it could have come from the bullet itself or the sand on the ground when he fell, said Dr Nagwan Mansoor, the chief doctor in MSF’s antibiotic stewardship program.

The MSF doctors began a program of specialised antibiotics that are not normally used because of their potentially dangerous side effects. AS also required numerous surgeries: seven in all. What would normally have been a five-day stay became three weeks, during which AS was put into isolation to prevent him infecting other patients. When his family came to visit, they could not touch him without wearing protective clothing.

In the end, AS survived. “We captured the patient from the mouth of death,” said Dr Nagwan. 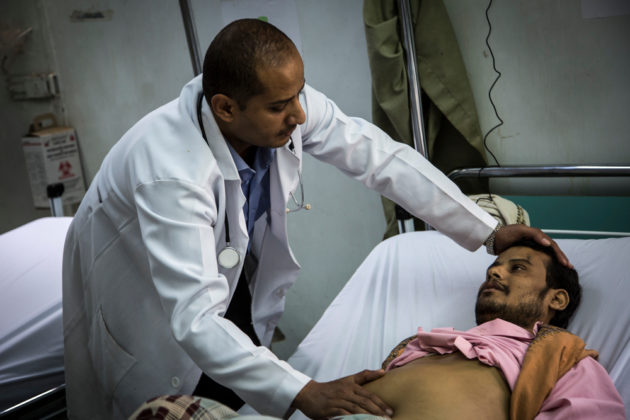 Dr Ahmed al Jouneid, head of emergency department of the Al Koweit university hospital in Sana’a, with a patient MSF / Florian Seriex
AMR has nearly quadrupled the amount of time that patients must spend in a field hospital to recover from war wounds: from an average of five to 19 days.

The Saudi-led bombing campaign in Yemen has produced thousands of casualties, but the real cost may not become apparent for years to come. After years of relentless bombardment that has already severely crippled the food supply, destroyed basic infrastructure, and disrupted medical care, Yemen has now become the frontline of antimicrobial resistance (AMR).

Up to now, the threat of superbugs spawned by drug-resistant disease was a theoretical threat, with handfuls of isolated cases causing great concern among physicians and scientists for what could happen if they got out of control. In Yemen the widespread problem of AMR threatens to collapse a health system that is already badly overstretched.

The widespread prevalence of AMR has nearly quadrupled the amount of time that patients must spend in a field hospital to recover from war wounds: from an average of five days - normally enough time to patch up fractures and gunshot injuries - to 19 days. This extra time, plus the specialised antibiotics that patients require to overcome their drug-resistant infections, means far fewer patients can be treated than normal, and it is much more expensive and difficult to do so. In standard public health centres without special facilities and drugs, it’s likely that many patients are dying of infections that would normally be treatable.

“It’s a huge burden on the health system that can barely take care of primary health care,” said Dr Ana Nery, the medical coordinator for MSF in Yemen.

Seventy per cent of the patients admitted to the MSF hospital in Aden have antibiotic resistant bacteria in their systems.

“There is a scary, scary prevalence of multidrug resistance we see in the Middle East,” said Dr Nery. MSF reports seeing patients infected with Methicillin-resistant Staphylococcus aureus (MRSA); extended-spectrum beta-lactamase- (ESBL); and some with carbapenem-resistant Enterobacteriaceae (CRE). It appears that many patients are losing limbs or dying due to antibiotic resistance, she said. Similar problems are occurring through the war-torn regions of the Middle East, including Iraq, Jordan, and Syria, according to Dr Nery.

Doctors in Yemen often treat even simple infections with broad-spectrum antibiotics, which only makes the problem worse - not just in the patient, but for the whole population.

Anecdotal information like that coming from MSF is extremely worrying, said Susan Elden, a health adviser on Syria for the UK’s Department for International Development (DFID). She noted that similar findings to MSF’s Yemen experience have appeared in small studies in Syria.

While the focus in humanitarian crises is often on providing emergency care, the problem is not the rescue operation itself but what happens afterwards with the management of infections. In many Middle Eastern conflicts, it appears that “many people are dying of infections”, said Elden. “The global aid architecture has not caught up with the realities of AMR in conflict yet.”

MSF is unusual among relief organisations in paying attention to superbugs at all. This was born of necessity. The normal antibiotic protocols the agency might use in sub-Saharan Africa often do not work in Yemen and the other war-torn Middle Eastern countries due to the high prevalence of AMR. “We saw that our patients are not improving with the usual antibiotics. Our patients are not getting better,” said Dr Nery.

The combination of drug-resistance with war harkens back to the pre-antibiotic era when Florence Nightingale was struggling to curtail deadly infections during the Crimea War, said Elden. 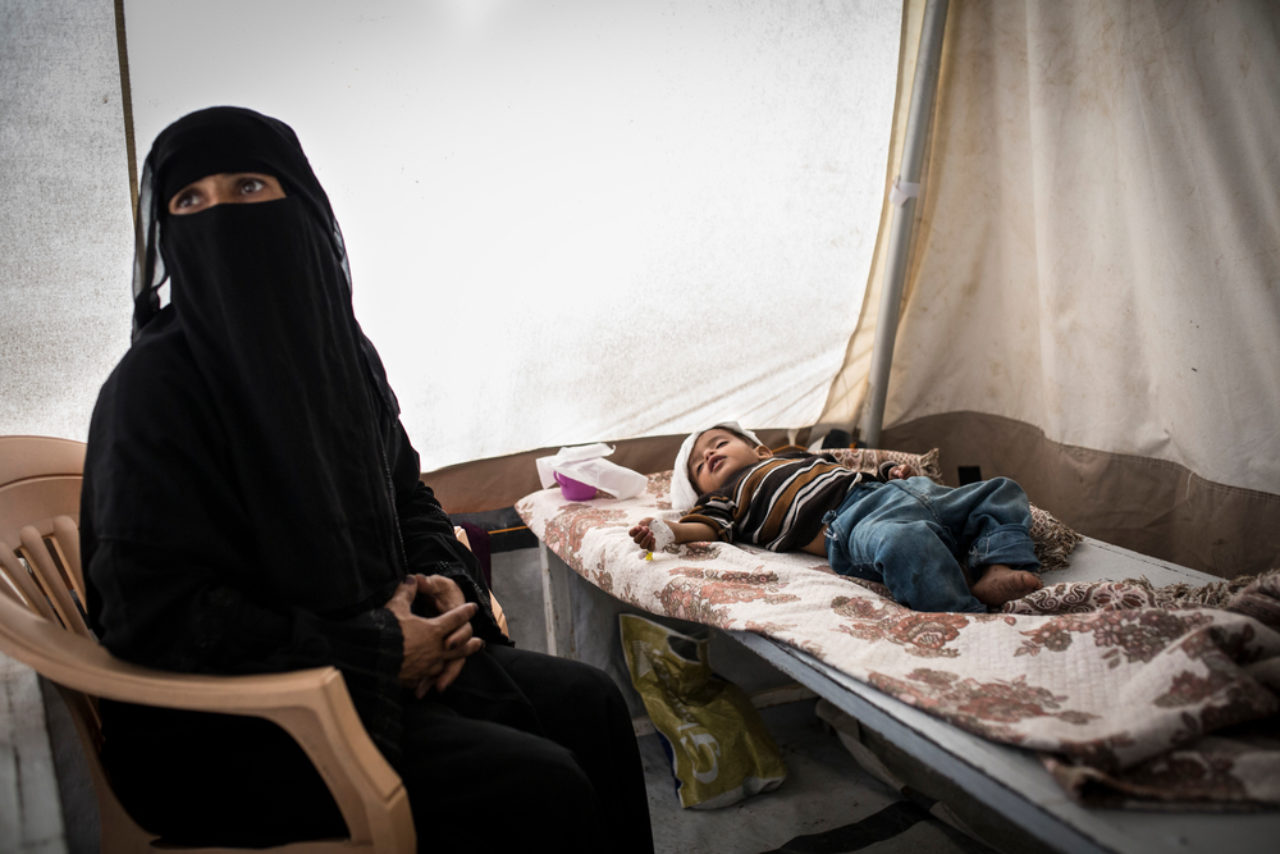 A child in the cholera unit of a Yemeni hospital Photograph: Florian Seriex/MSF

When the health system is broken

After more than one thousand days of war in Yemen, the health of the population is dire. More than 10,000 civilians have died so far from the fighting, with 52,000 reported wounded, according to the UN. These are only official reports, and a spokesperson cautioned that the actual numbers of casualties are estimated to be much higher.

Disease has taken its toll. The country has the fastest growing cholera outbreak ever recorded, with more than one million people now affected, a quarter of which are small children. Diphtheria has now emerged in the country as well. Yemen has become the world’s hunger crisis. Nearly 18 million people do not have enough food to eat, raising concerns of an impending famine. Malnourished people are much more susceptible to disease.

The country’s health services and water and sanitation systems have been badly damaged by the war and in many cases are no longer functioning. Three million children have been born into the country in the nearly three years since the war started, with 30 per cent underweight. 25,000 children died at birth or within the first month of life, according to Unicef.

Typical of Middle East countries, Yemen and Syria had high consumption of antibiotics before conflict broke out, and Syria was a major producer both for itself and for export. The over-consumption was a result of weak oversight of antibiotic use, which became even worse with the onset of the crisis seven years ago. Since then, much of the country’s diagnostic laboratory capacity has been destroyed, compounded by poor sanitation and drinking water quality. At the same time, people still had relatively easy access to powerful drugs, said Elden.

A 2014 study found a prevalence of non-prescription antibiotic use of 48 per cent in Saudi Arabia and 78 per cent in Yemen. Most of the antibiotics were supplied by pharmacies.

Caroline Seguin, the Deputy Operational Manger for Middle East for MSF France, attributes the high rates of drug resistance to the overwhelming number of wounded combined with a lack of hygiene in hospitals, cross contamination of infected patients, and “over use of antibiotics - a lot, a lot, it is crazy.”    The larger problem is a lack of surveillance and infection control procedures as part of the humanitarian response, which are needed given so many simultaneous, prolonged conflicts, said Elden. “Where we need the most information we don’t have it,” she said.

In humanitarian crises such as Yemen and Syria, solid data are hard to come by. The MSF experience is mostly observational and based on limited studies, although it trying to organise more comprehensive analyses. In Yemen, the problem of AMR is so bad that MSF created the country’s first microbiology lab in Aden. Other aid agencies, such as the International Committee for the Red Cross and the International Medical Corps report that they are too busy working on humanitarian relief to track AMR.

AMR could undermine modern medicine. The casualties of war are now starting to resemble accounts from the history books, when the greater toll of a campaign was not the battlefield, but the long-term impact of resulting diseases that doctors struggled to treat.

In addition to the danger of infection from the war-wounded, the breakdown of the health system has left children particularly at risk. Before the war, Yemen had a functioning health system with an acceptable level of vaccination; now, more than 80 per cent of small children are not vaccinated, making them all the more vulnerable to infection, said Dr Nery.

“This is a new reality for Yemen. It’s a sad reality”.

This story was published with The New York Times. Our Creative Commons license does not apply to this piece. If you would like to republish this story please contact us on [email protected]