This is our 2017 impact report, looking at our investigations, their influence and what difference they made. This year, we focused on ten key areas, which generated stories in the Guardian, Telegraph, Times and Daily Mail, BBC, ITV News at Ten and Channel 4 News and in outlets internationally, including the New York Times, Washington Post and Le Monde.

Those stories increased awareness of hidden wrongdoing, sparked parliamentary debates, questions, calls for action and even a change in the law.

Here are our highlights from a busy year at the Bureau. 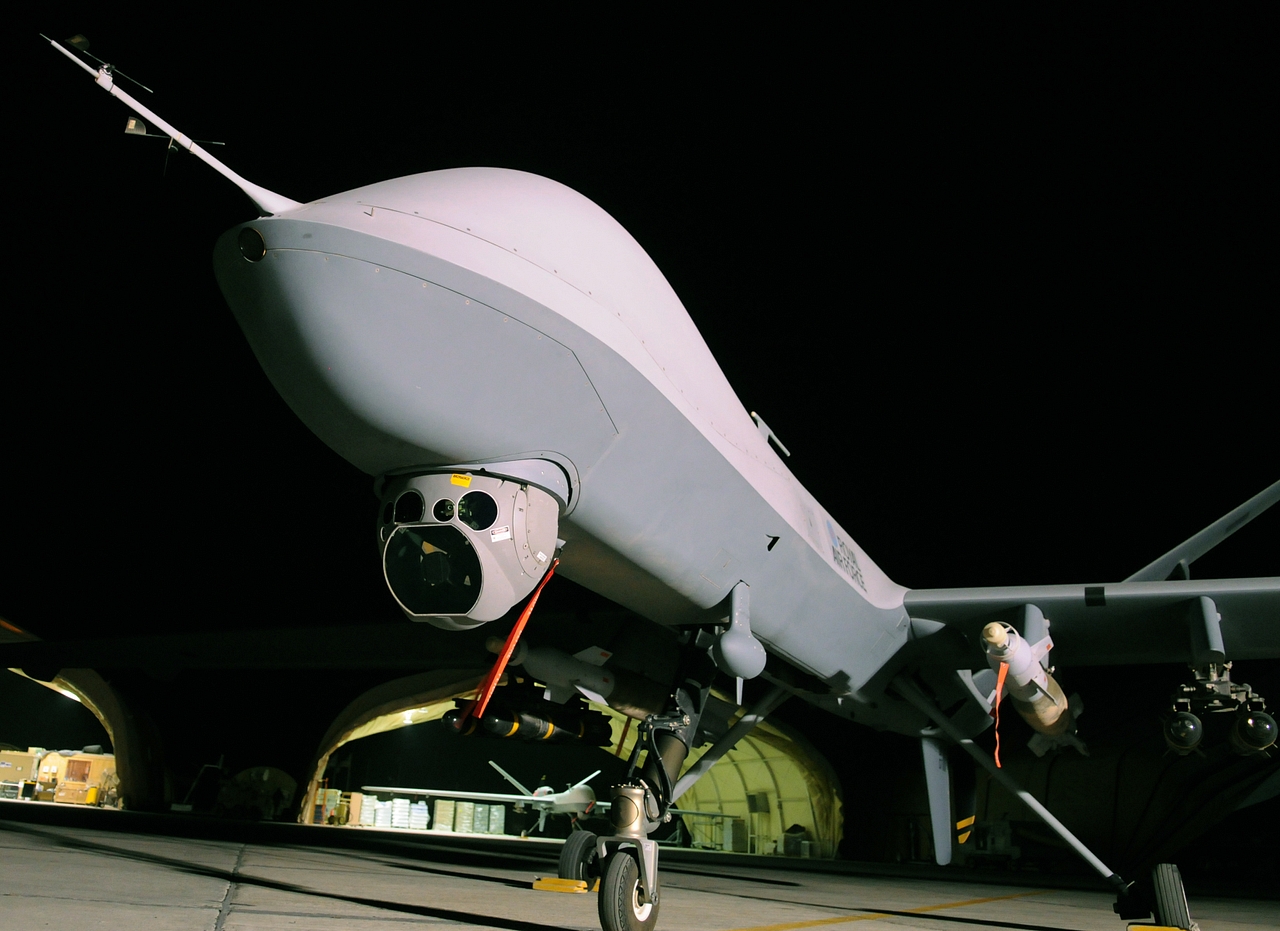 In January we revealed that there were ten times more drones strikes under Barack Obama’s presidency than under that of George W. Bush.

Our investigation into a rogue surgeon, who carried out unnecessary operations in UK hospitals for financial gain led to legal actions against him, as well as contributing to a wider debate on the safety of private hospitals.

Our stories were published with The Daily Mail, the Daily Beast and Newsweek, with hundreds of other media outlets picking up our drones figures in the UK and internationally, including CNN. In February we revealed that nine young children had been killed in President Trump’s first military action, a tragically botched raid on Yemen. The American Civil Liberties Union followed up our coverage by filing a lawsuit against the Trump administration and the Pentagon admitted to NBC that our figures were correct.

Our investigation into UK slaughterhouses endangering consumers hit the front page of the Observer and boosted a campaign to stop government cuts to meat inspectors and led to public outcry.

We exposed “fake news” on a popular website featuring a misleading map of crimes allegedly committed by refugees in Germany, which is widely seen as one of the factors leading to it being taken offline. The Royal Statistical Society used our work in their submission to a parliamentary inquiry on “fake” news.

Sir Harry Evans, former editor of the Sunday Times, was a key speaker at a Bureau panel discussion on so-called “fake” news.

Our stories were published in partnership with the Observer and the Daily Beast, with our Yemen findings cited in many publications including Newsweek, the Guardian, and the Independent, as well as NBC News, New York Magazine, Daily Kos, Spectator, Intercept, IB Times, Human Rights Watch, Al Jazeera, Al Araby and many other publications across Europe, Russia and the rest of the world. In March we launched Bureau Local, an innovative project bringing more public interest journalism to the local level in the UK. Over 200 people joined in the first week.

We also launched a new website which made our highly used drone data easier to analyse. The International Bar Association has since used our drone data in its work.

President Donald Trump and his wife, Melania, at his inauguration on 20 January, 2017 via Tribune News Service/Abaca Press

In April we scrutinised President Trump's counter-terrorism actions during his first 100 days in office.

We ran an investigation on cruelty in Scottish slaughterhouses, which led to a question being asked in the Scottish Parliament on the day of publication.

We also published a story on untreatable superbugs.

Our stories were published or cited by the Sunday Telegraph, Sky News, the Guardian, The Ferret, the Daily Record and the Ecologist, with our drones figures cited by CNN, the Jerusalem Post and the Intercept. Afghan amputee police officers on the front-line via Sardar Mohammed

In May we revealed links between pollution from pharmaceutical companies in India and the rise of superbugs. In our light of our work and that of other groups, the European Commission has now created a system to trace drugs back to the factory where they were made. We hosted a roundtable discussion on the global threat of antibiotic resistance.

We reported on a harrowing story about Afghan amputees fighting the Taliban, which the Washington Post described as “an outstanding piece of journalism”.

The Bureau was honoured with an Online Media Award for our website relaunch and our work was also shortlisted twice for the Data Journalism Awards 2017, recognising our fake news and false flags story about the Pentagon and our online drones tool.

Our stories were published in partnership with The Daily Beast, the Times and the Guardian. In June, our new Bureau Local team published a series of investigations about the UK general election, working with nearly 350 local journalists. This produced more than 50 local stories and eight national stories, revealing the possibility that Theresa May might lose her majority. One of our stories analysed political ads on social media. The Electoral Commission later launched an enquiry into digital political ads, drawing on a small number of media investigations of this issue.

We revealed that a militia controlled by the US ally, the United Arab Emirates, had disappeared alleged terrorists in Yemen to a secret prison. After the story was developed further by the Associated Press, senior US Senators then wrote to the US Secretary of Defense, asking him to review reports of torture.

Our stories were published with the Times, Guardian, Daily Beast and New York Times, as well as dozens of local papers. In July our revelations about the huge increase in megafarms in the UK led to parliamentary questions and a pledge from the Environment Secretary, Michael Gove, who said: “I do not want to see, and we will not have, US-style farming in this country.”

Our stories were published with the Guardian and nine local and regional newspapers, including the Eastern Daily Press and the Belfast Telegraph. In August we continued our investigations into farming in the UK, by looking at pollution with stories published widely by the local press. Our work on food and farming continued to produce other impact, including a debate on farm pollution in the Welsh Assembly.

We also revealed that President Trump had significantly ramped up the airwar in Afghanistan, with nearly three times as many strikes in 2017 as in the year before.

Our stories were co-published with ITV News and the Guardian, as well as being cited in international publications including the New Yorker, the Washington Post and Teen Vogue. An image of the South African election via Ben Curtis/AP

In September, in the run-up to the German election, we scanned 35,000 tweets and revealed how right-wing websites were demonising Islam and immigrants alike.

We also worked with a whistle-blower to expose shocking standards in some British abattoirs.

Our work in this area, over a year, as well as that of other civil society groups, helped persuade the government to change the law, introducing compulsory CCTV in abattoirs.

One of the biggest global stories in September was the fall of once mighty PR firm, Bell Pottinger, a subject the Bureau has covered since 2011. Our investigations were cited in much of the reporting.

We also published an investigation into widespread corruption in Afghanistan.

Our stories were published with ITV News at Ten, the Independent, the Daily Beast, Buzzfeed Germany and the EU Observer. In October we published a major investigation which looked at cuts into domestic violence refuges. Twelve MPs and top police chiefs spoke out about the cuts to funding following our revelations. In December MPs also held a parliamentary debate on refuge funding, with our work being cited by the House of Commons library in a briefing.

Our story exposing the racist targeting in immigration checks led to calls from MPs for a Home Office review.

Our stories were published with Channel 4 News, Elle magazine and in 30 local newspapers. In November the Bureau went to the European Court of Human Rights to defend press freedom.

We published a major investigation into a controversial airstrike in Afghanistan and named ten civilians, including teenagers, who were killed. We continue to draw attention to inconsistencies in the US account of its response since the incident occurred.

In November, following extensive reporting of a deadly truck-bomb in Somalia in October and other stories, the Bureau's work generated coverage in over 1,700 papers, broadcasts and outlets, a new record for the Bureau.

We launched a new investigation into private spies and their use by big companies.

The Bureau also dug into Twitter fakery, with an investigation of the secretive world of the online influence industry.

We published our annual drones report, which showed that air strikes had doubled during President Trump's first year in office.

One of our stories was published as a front page splash in the Guardian, with other investigations running in the New Statesman and on Politics.co.uk. Thank you. We couldn't do our journalism without the support we receive from you. It helps us to carry on doing what we should be doing - and here's a link to our 2016 report, which demonstrates our long-standing commitment to reporting on important stories, year on year. We are indebted to our courageous whistleblowers, to members of the public who tip us off about stories, to journalists who work with us and to our funders, who allow us to carry out acts of journalism in the public interest.

Written and edited by Katharine Quarmby.

Header image, of our December 2017 panel event on ways forward for non-profit journalism, via Rob Stothard.