To celebrate the Bureau Local’s first year, we held an event that brought together reporters from the Boston Globe to the Lancashire Post to discuss why local news matters.

Our keynote speaker, Mike Rezendes from the Boston Globe in the United States, took us behind the scenes of his world-renowned investigation into a sex abuse cover-up in the Catholic Church.

We heard how the story bagged the Globe investigative team a Pulitzer Prize and was turned into the Hollywood blockbuster “Spotlight”, but he was keen to make clear: “Clergy abuse is now really global in nature… but what I wanted to emphasise here to all of you is that this was an investigation that started with one piece, it was a local investigation”.

And this goes hand-in-hand with making impact. “To me, to make a measurable impact is exactly what it’s all about. What can we do to change things for the better? That, for me, is the point of investigative reporting.”

He also told the audience his three top criteria for what makes a ‘Spotlight story’, which you can hear in his full talk on the livestream video here.

Following our keynote, the Bureau Local’s Maeve McClenaghan was joined on stage by three reporters who worked on the network’s domestic violence investigation that’s so far produced 67 pieces. 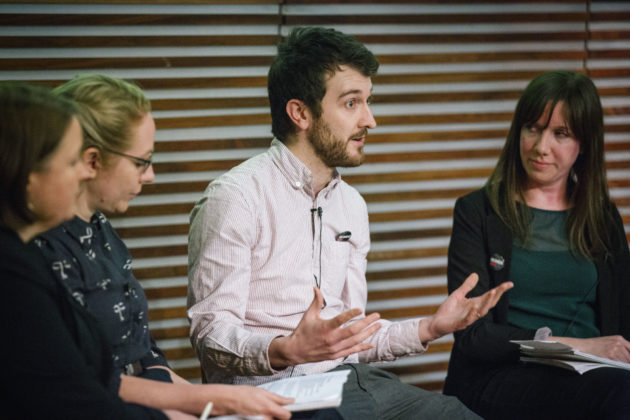 Emma Youle from the Archant investigations unit, Chris Burn from the Yorkshire Post and Emma Pearson from the Lancashire Post were among 20 journalists who worked with the Bureau over a six month period.

“I got involved with the investigation after finding a domestic violence charity in South Yorkshire was facing closure after council funding cuts,” explained Chris Burn. “It turned out it was the only one of four that were previously in that area that was still going.”

The team probed further into council funding, and interviewed dozens of survivors and refuge managers, enabling them to come up with figures for the number of people being turned away due to cuts.

“I did hit a wall of silence at first,” Archant’s Emma Youle said. “But then I was able to go back armed with the data.”

In all, 12 local MPs spoke out on the findings.

Emma Pearson from the Lancashire Post said that police attitudes towards domestic violence had changed over her 15 years as a reporter, but resources had been cut - she explained: “Our police force has lost £76 million since 2010, that means about 800 fewer officers on the beat.”

Soon, the Bureau Local’s No Refuge Tour will take a spoken word show developed with one of our investigation’s sources to the places where local reporting happened, aiming to reach at least 500 people. This project has been supported by the Agora Journalism Center’s ‘Finding Common Ground’ fund.

When asked about their work more widely, multi-award-winning journalist Emma Youle, explained: “If you’re working on investigative stories, you don’t write them, send them off to press, finish your campaign and put it to bed. Good, campaigning, investigative stories stay with you.”

On local news and its role in society, Emma Pearson added: “Campaigning is what local journalism is about. Local newspapers are absolutely about advocacy for their local communities.”

The Bureau Local’s collaborative investigative newsroom was launched by the non-profit Bureau of Investigative Journalism in March 2017.

We quickly found our stride when a month later an early general election was called and in just a year, our now 650-strong network has published almost 160 exclusive local stories across 10 investigations.

Beyond the headlines, we have also hosted 24 events with more than 350 people, from hacks to discussions, from Bournemouth to Glasgow, and spoken on more than 50 platforms about our work.

The Guardian’s Roy Greenslade said in his piece last week: “In straitened times for Britain’s newspapers, these ventures represent an attempt to promote the virtues of old-fashioned reporting by harnessing digital technology. And, most significantly, public service is at the heart of their ambitions.” 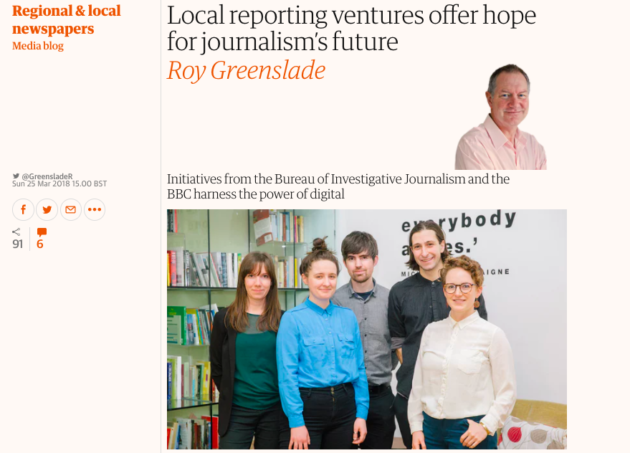 Screenshot of Roy Greenslade article in The Guardian

Be part of the change

If you want to support data-driven local journalism done in collaboration, in the public interest, there are three ways you can support the Bureau Local.

Whether you are a journalist, technologist, activist or member of the public, you can take part in our investigations or share our work by joining the Bureau Local network here.

You could also introduce us to other people and organisations that we should be working with by dropping a line to our Director, Megan Lucero.

Or you could make a donation to the Bureau, which is an independent, non-profit organisation funded by foundations and individuals who share our values. Support at all levels is critical so please consider making a donation here.

Header image, of Mike Rezendes of the Boston Globe speaking at the event, by Rob Stothard/TBIJ

Kirsty is a technology journalist with experience in harnessing the power of community networks. 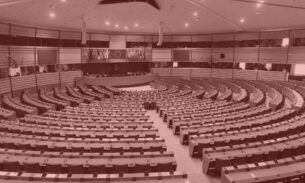