The US government has launched an international drive to stem the rising tide of superbugs, asking for pledges from people with power around the world.

An audience of nearly 400 including world leaders, pharmaceutical company executives, heads of biotech companies, foundation trusts and NGOs were shown a film produced by the Bureau and CNN about how superbugs are killing babies in Malawi.

Davies then gave a speech telling stories of the patients she has met during two years reporting on antibiotic resistance (also known as AMR) for the Bureau, before introducing US Health Secretary Alex Azar and World Health Organisation (WHO) Director-General Dr Tedros Adhanom Ghebreyesus to the stage.

"We take antibiotics for granted but they really are wonder drugs," she told the audience. "Collectively, as an international community, we have squandered them, used them for coughs and colds, administered them en masse to animals to fatten them up. And in places like Malawi and India, and in all of the countries in the world, because we’re all affected, we are now paying the price because they might not work for much longer."

Watch Madlen Davies hosting the launch of the CDC Global AMR Challenge in New York, starting with the Bureau/CNN film

Antibiotic resistance has been called the world’s greatest public health threat by the World Health Organisation and is estimated to kill 700,000 people worldwide, a number which could rise to 10 million a year by 2050 if no action is taken.

The US government's Centers for Disease Control and Prevention is asking stakeholders to make specific pledges within five areas: tracking and data, infection prevention and control, antibiotic use and environment and sanitation. More than a hundred pledges have already been made.

"The good news is that we can act now - there are lots of things we can do," Davies told the audience.

Secretary Alex Azar of the Department of Health and Human Services went on to officially launch the initiative, by outlining the companies and groups that had already made pledges.

Next, WHO Director-General Dr Tedros Adhanom Ghebreyesus spoke of the necessity of concerted global action to tackle this global problem. 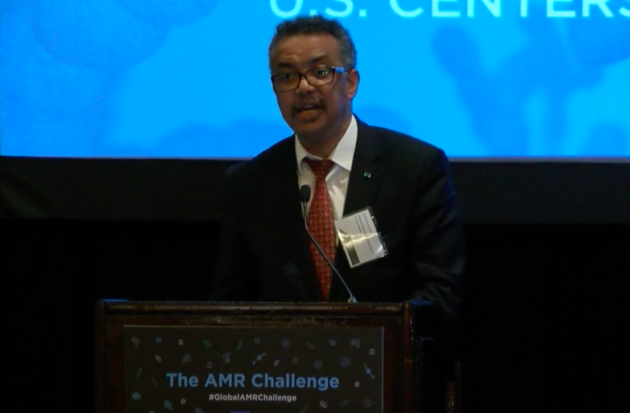 Dr Tedros Adhanom Ghebreyesus, director-general of the World Health Organisation, speaks of the importance of tackling this global threat 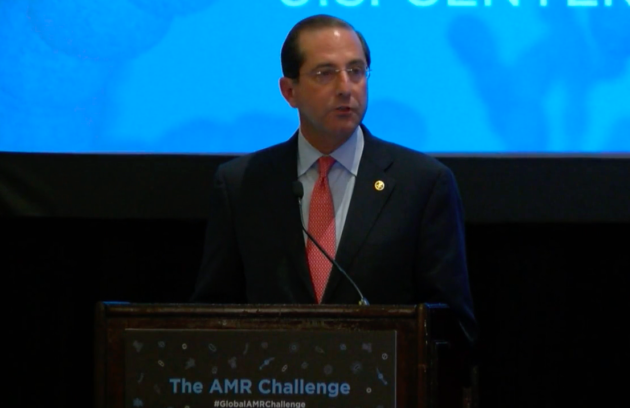 Secretary Alex Azar, of the US Department of Health and Human Services outlined the pledges that have already been made

Dr Balram Bhargava of the Indian Ministry of Health and Family Welfare then gave a perspective on the problem, joking that he represented 15% of the world’s population.

Finally Anand Anandkumar, CEO of Bugworks, a company which is developing next generation antibiotics, spoke of his vision for the future, and hinted that his company is close to a breakthrough.

For more information or to make a pledge, visit the AMR Challenge Initiative website.

Header image of Madlen Davies speaking at the CDC event in New York, copyright US Centers for Disease Control and Prevention.

Madlen is an award-winning investigative journalist