Harry never walked, always ran, which often added to the excitement he generated around himself. He was fierce in pursuit of wrongdoing, a man of infinite curiosity, a lover of life and people. He embraced all.

I first met Harry on joining the Sunday Times and becoming one of the team, with Bruce Page and Phillip Knightley, investigating the story of thalidomide, the drug which did terrible damage to large numbers of children around the world. After 10 years with the sub judice rules preventing the press from revealing what had happened and how, Harry made the decision that we should proceed to investigate with an experienced and determined team.

Harry never let go of a story and never deserted the victims. Thalidomiders, as they came to be called, would attest to his constancy and as a journalist working with Harry I learnt of the importance of that constancy. Once the campaign on behalf of the thalidomide victims had begun, Harry insisted on related stories appearing week after week. Many inside the newspaper, including some of the “Barons” as the managing editors were called, argued against this approach.

Harry was adamant. A single story did nothing. Indeed after the first substantial piece which kicked off the campaign was published – with some trepidation given the legal constraints – there was a deathly silence from the rest of the press. Months went by before there was some traction and support from other media.

Harry was an immensely kind man. At his 90th birthday celebration his wife Tina told a wonderful story. One morning at their home in New York, Tina came down in her dressing gown. Waiting in her sitting room was a woman from Texas wearing a large hat, come to see Harry about setting up a literary festival. In the dining room sat a student from Columbia wanting Harry to critique his thesis. In the garden was Al Sharpton who Harry was urging to write a memoir and said he'd tell him how to do it. But, Tina reports, Harry had gone swimming and was nowhere to be found. While the story ends there, anyone who knew Harry would also know that he would have delivered as promised. To them and countless others.

He was marked by his courage. He surrounded himself with forceful journalists, all of whom wanted to be heard, none of whom would readily give way to the considerable editor of a great newspaper. Undaunted he would do battle with this fierce crew who spent even more time jousting with each other. But he reserved his greatest fire power for those with power who abused it, for the victims of injustice and in pursuit of the truth. He believed that there was such a thing.

He did an event for the Bureau – ever generous with his time, he flew in to assist us – where he talked of the growth of “fake news”. He despised the term and argued there was truth or lies. Whatever “fake news” was, it was not news. 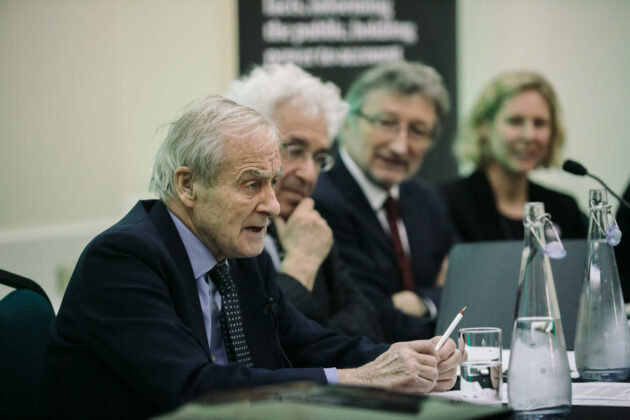 It was this understanding which inspired us to create the Bureau 11 years ago. It was a time when investigative journalism was in stress, with the digital revolution destroying the old advertising models by which newspapers survived. We believed that democracy itself was imperilled in the absence of a probing press with a commitment to truth.

Thanks in large part to Harry we also understood the importance of repetition, of staying with a story if you wanted to make a difference. Integrity, having a moral compass, and seeking out facts in depth were also a vital part of the purpose of the Bureau's existence.

At the outset Harry became our patron, agreeing without reservation or a moment's hesitation to do so. No patron could have honoured an organisation more, and it is deeply moving that the Bureau is named as one of two journalistic organisations to donate to in his name. We thank him and his family for their support.

The Bureau will miss his wise counsel. As will I.

Header image by Amy Scaife for the Bureau

Elaine Potter founded the Bureau with her husband David in 2010