This week, NGO Global Witness published its latest report on the oil, gas and mining industry in Africa. Running at 40 densely-written pages, the work looks in detail at the industry in three countries: Angola, Nigeria and the Democratic Republic of the Congo (DRC).

All three, says the report, have been afflicted by the Resource Curse, or ‘paradox of plenty’. The countries all have an abundance of natural resources, but suffer from extreme poverty.

‘…their citizens, however remain amongst the poorest in the world, with approximately 70% of Angolans and 80% of Nigerians living on less than two US dollars a day.’

The DRC, meanwhile, ranks bottom on the UN’s Human Development Index despite a vast wealth of natural resources – particularly in mining.

The main problem in Angola and Nigeria, says the report, is the opacity of oil contracts in the two countries. While their governments have sought to ‘demonstrate greater transparency in the payments received from the oil sector’ over recent years, regulation and public scrutiny of allotted contracts is severely lacking. In addition, it appears that government officials could be shareholders of the very companies that have been awarded major extraction contracts.

In Angola, Global Witness unearthed a number of indigenous oil companies that have been able to obtain shares in oil. They ‘do not disclose publicly their beneficial owners, or, when they do, some of the shareholders have the same names as senior public officials’, the report reveals, ‘creating public suspicion’.

In terms of providing detailed background information on each of its case study countries, the report is excellent. Similarly, the report provides a thorough listing of regulations in each country. However, what is perhaps lacking is the investigative sting: the follow-through. In the Angola example, Global Witness describes how its team wrote to shareholders ‘to determine whether they were indeed government officials’. Somewhat frustratingly, in each case the paragraph concludes, ‘we did not receive any response.’

This continued lack of response does, however, highlight the difficulties in identifying exactly who is controlling, and benefiting from the extraction and sale of natural resources. At every turn, the Global Witness team seems to face roadblocks in its quest for transparency.

NGOs are not the only ones encountering a culture of secrecy. The report includes a number of case studies where foreign companies, which have entered into contracts with indigenous set-ups, cannot identify the owners of its partners. For instance, the report reveals that when the Norwegian state-controlled company Norsk Hydro went into business with Angolan company Somoil, ‘it was not possible for Norsk Hydro to identify Somoil’s owners’.

Norsk Hydro were so concerned about the secrecy surrounding Somoil, says Global Witness, that the company hired ‘a well-known investigative firm to conduct a due diligence investigation on the Angolan company’, and attempted to put in place anti-corruption safeguards. But, unremarkably, Statoil would not confirm to Global Witness whether the safeguards were being adhered to. 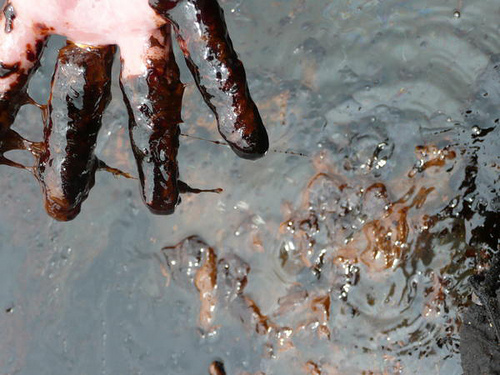 An oil spill in the Niger Delta

In its Nigeria case study, Global Witness seems to have more success in identifying conflicts of interest regarding oil contracts. The group raises serious questions about whether a Nigerian company with a share in oil contracts was owned by a Senator chairing a Senate oil committee. The Global Witness team has been careful to couch the report in qualifications, but they do present convincing evidence of wrongdoing.

The key conclusion of the work is a greater need for transparency regarding the allocation of energy contracts, particularly oil.

The group concludes, ‘The scramble for oil and minerals has often been hugely destructive in poor countries and, by encouraging corruption, has contributed to massive human misery and governmental failure.’

To counter this ‘complexity and opacity’, Global Witness sets out a list of recommendations and a ‘Citizens’ Checklist’, which purports to give guidance as to how citizens and civil rights groups can hold their governments to account when extractive companies negotiate for access to rights for natural resources.

There is no doubt that this is a superbly researched, thorough document – a veritable ‘goldmine’ of information. However, the text is highly complex, and would take anyone but an expert a number of days to read and fully digest. It is a pity that some of the most intricate chains of investigation are not represented in graphs or diagrams, as this would undoubtedly make what is a very difficult subject, easier to understand.

The report focuses on the need for transparency so that citizens can hold their governments, and companies to account. But any citizen attempting to understand the report would require substantial patience and perseverance.

Half of UK chickens produced by US agriculture giants