Professor Anatol Lieven is author of the recent book Pakistan: A Hard Country. Chair of International Relations and Terrorism Studies at King’s College London, he lectures on insurgency, terrorism, and Islamist movements. He was in Pakistan at the time of some of the drone strikes featured in our reports.

The Bureau showed Professor Lieven our evidence suggesting civilians have died in drone strikes in the past year, which contradicts Washington’s continued insistence that no noncombatants have died in targeted killings.

This is Professor Lieven’s reaction:

On the accuracy of remote-controlled drones:
‘There are two issues here. The first is when the US gets it wrong and simply hits the wrong target, or a target which is partly right, but in circumstances where lots of completely unconnected people are going to be killed. I was actually in Pakistan at the time of the attack on Datta Khel on March 17 2011.

There were Taliban representatives at this jirdaga [meeting of tribal elders], but they were doing something which they do a good deal of, which is trying to mediate and resolve a dispute between two local clans. In those circumstances it was inevitable that the vast majority of the dead would be simply local elders, which is precisely what happened.

But on the other hand they weren’t wrong that Taliban representatives were there, even though if I remember rightly the commander they were actually looking for was not there.

The other side of this is much more complicated, and it brings out something that’s an essential fact about guerrilla warfare and insurgency in general, which is that the line between civilians and fighters has always been extremely blurred.

These commanders don’t live in separate military headquarters or barracks; they live very often in their own houses, with their own families. If you’re going to hit these people in their own houses at their headquarters you’re virtually bound to kill women and children, because they’re in the same complex. Unless you are exceptionally surgical, and only take out the men’s side and not the women’s side, but that’s hardly likely.

If you’re going to hit these people in their own houses at their headquarters you’re virtually bound to kill women and children, because they’re in the same complex.

If you’re going to conduct this drone strategy at all, you are going to kill women and children as part of it.

The question of to what extent the term ‘civilian’ or ‘military’ makes sense in the case of guerrilla warfare is obviously a highly complicated one.

According to the Geneva Conventions armies can bombard defended cities even if it’s certain in the process that women and children will be killed. To say otherwise would make Eisenhower and Montgomery and many others war criminals.

It’s a difficult one. But, strictly speaking, to judge by all the information that I picked up in Pakistan in March, and the information appearing in the Pakistani press, the statement that no civilian has been killed is false.’

On the claim by John Brennan that no civilian has recently been killed by drones:
‘Nonsense, frankly.

Unless you could design munitions that will hit one room and not the compound in general, the drone strategy does not permit you to be discriminating in this way, as far as the families of the actual commanders or the families who are hosting them and giving them shelter are concerned.

Once again that’s one side… the point is that they’ve also simply made mistakes.

Even leaving aside this issue, which is a complicated one, there’s ample evidence of what happened on March 17, and well, he needs to be challenged on that. Is he saying that by accepting the presence of Taliban representatives at their jirga, these elders were therefore Taliban, militants and so forth? If so, then you more or less have open season on a huge number of ordinary Pakistani Pashtuns who’ve had some contact with the Taliban. No. He should be challenged on that particular episode.

The line between civilians and fighters has always been extremely blurred. These commanders don’t live in separate military headquarters or barracks. If you’re going to hit these people in their own houses at their headquarters you’re virtually bound to kill women and children.

The other thing about this one [strike on March 17 2011] was that it came just after [CIA agent accused of murder] Raymond Davis was released, so it was an extremely undiplomatic action as well. A good deal of this does suggest that the US military is somewhat on autopilot over this, that it’s not actually responding to diplomatic input or to political analysis. It’s simply identifying targets and going after them.’

On US military operations in Pakistan:
‘One of the reasons why the drone strategy doesn’t make sense is because it infuriates the Pakistani population so much.

However, when the Americans strike Pakistani Taliban targets, they are in private welcomed by the Pakistani government and army, so there’s a good deal of official hypocrisy in Pakistan as well.

But my analysis would be… that the whole approach of killing Taliban commanders is of far lesser utility than the Americans think it is, and indeed so far has had no noticeable effect whatsoever on the Taliban and their capability to go on fighting, because there always seems to be somebody else to step forward to take their place.

Now over a very long period, maybe you could wear down the Taliban to the point where it would do real damage to their ability to fight, but the question is: are we going to be there for that long?

Also, if we engage in this for decades, what on earth is this going to do to the stability of Pakistan? And the old, old thing: you kill some of these people, and you create an even greater desire for revenge among all their relatives. Particularly of course if women and children are killed.’

On whether drone strikes are the impetus for retaliation against US forces in Afghanistan:
‘Yes. In the Pashtun territories absolutely. It’s both because that is a fundamental aspect of Pashtun tribal culture in general.

Revenge. If a relative is killed, especially if women and children are killed. But there is another factor, which is that… there’s a deep feeling in the Pashtun areas that this way of waging war is illegitimate and contemptible and unmanly, basically, because you run no risk.


You kill some of these people, and you create an even greater desire for revenge among all their relatives. Particularly of course if women and children are killed.

And that, my impression is, creates an even greater hatred and contempt for the United States and the US army, and an even greater desire to hit back at whatever of them you can actually hit back at and see, which is of course the troops on the ground in Afghanistan.’

On the purpose of the CIA drone campaign:
‘It’s a straightforward strategy of killing commanders on the other side, thereby disrupting command and control and persuading commanders that if they stay with the Taliban they will die very soon and that therefore they ought to abandon the Taliban and seek reconciliation with the Afghan government. 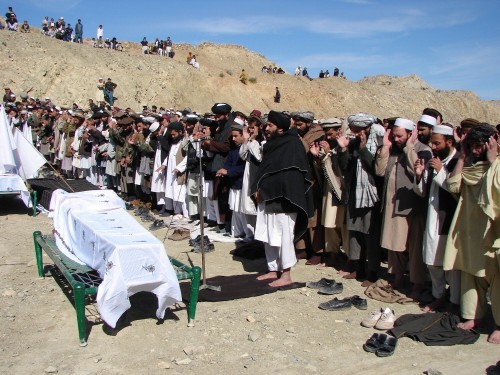 The problem is that most of them don’t seem to be scared.

As far as I can see, it’s not working.

As I say, it might work over a very long period, but the Taliban are perfectly capable of reading newspapers and seeing that while this is going on US forces are also going to pull back by 2014.

My impression is that it’s a more discriminating and a more sophisticated version of the Vietnam body-count scenario, approach: you simply tot up the number of enemy fighters who you’ve killed and you think that equates to victory.’

Related article: The CIA drone strike that rewrote the rules

On whether one in five strikes could have killed civilians:
‘To be honest with you I’m surprised it’s not higher. As I say, these people live in compounds with families. Now it may be that precisely because of the drone strikes the commanders are now actually living separately from the women and children, but the whole point of guerrillas is they live among the population… no, I find that entirely plausible.’

Half of UK chickens produced by US agriculture giants