Claims by President Obama’s chief counter-terrorism adviser John Brennan that ‘there hasn’t been a single collateral [civilian] death’ in Pakistan since August 2010 are found to be untrue today, following a major Bureau investigation.

According to Brennan, Barack Obama himself has ‘insisted’ that US drone strikes are ‘exceptionally surgical and precise’ and ‘do not put… innocent men, women and children in danger’.

Yet a detailed examination by the Bureau of 116 CIA ‘secret’ drone strikes in Pakistan since August 2010 has uncovered at least 10 individual attacks in which 45 or more civilians appear to have died.

The Bureau has identified and can provide the family names for, six children among those killed. 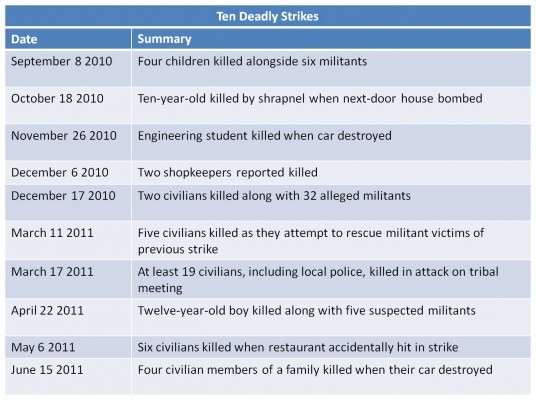 Despite the Bureau’s evidence, US intelligence agencies insist that no civilians have died. A senior official described the Bureau’s data as ‘wildly inaccurate’, but refused to share any evidence.

For more than six months, US intelligence sources have been insisting that there have been no civilian deaths since a drone strike on August 23 2010. That CIA attack caused the deaths of at least seven civilians, all women and children, and reportedly led to a policy change in how strikes are targeted.

Last month, one of President Obama’s most trusted advisers went on the record with the claim. John Brennan is Assistant to the President for Homeland Security and Counter-terrorism, and former deputy executive director of the CIA.

Asked on June 29 about US ‘targeted killings’, a euphemism which in this case referred to the CIA drone strikes, Brennan responded: ‘One of the things President Obama has insisted on is that we’re exceptionally precise and surgical in terms of addressing the terrorist threat. And by that I mean, if there are terrorists who are within an area where there are women and children or others, you know, we do not take such action that might put those innocent men, women and children in danger.’

He was more precise: ‘In fact I can say that the types of operations… that the US has been involved in, in the counter-terrorism realm, that nearly for the past year there hasn’t been a single collateral death because of the exceptional proficiency, precision of the capabilities that we’ve been able to develop.

The Bureau understands that Mr Brennan’s publicly stated views chime closely with those of the CIA itself. The ‘no civilian deaths’ claim has remained substantially unchallenged until now.

The American Civil Liberties Union, which is seeking public scrutiny of CIA drone strikes, said: ‘It is absurd that senior US government officials would state that there have been no civilian casualties in drone strikes in Pakistan, and at the same time refuse to confirm or deny the existence of civilian casualty data.’

In recent months, as part of a major investigation of the US covert war on terror, the Bureau has examined 116 reported CIA drone strikes in Pakistan between August 23 2010 and June 29 2011.

Between them, the attacks have killed at least 740 people, among them 36 named fighters from al Qaeda, the Taliban and other militant groups. Hundreds of unnamed low-ranking fighters are also likely to be among the dead.

But civilian deaths have been credibly reported in more than one in five of the strikes.

To date, the Bureau has identified 45-56 civilian victims across 10 individual strikes – the most recent in mid-June 2011. The dead include six children.

There is also sufficient evidence to warrant further investigation into at least 15 further strikes, in which 66 or more additional civilians may have died.

Clive Stafford Smith is an American human rights lawyer who lives in Britain and heads up Reprieve, a campaigning law firm. He said the Bureau’s investigation raises major concerns about whether President Obama is being misled about civilian deaths:

‘I voted for President Obama, and had high hopes in his administration. There is the greatest danger here of a falsehood being told by US intelligence services, which misleads President Obama into taking decisions which are manifestly contrary to America’s best interests.’

The Bureau presented a summary of its findings to the White House and to John Brennan’s office, and asked for comment. Both declined.

But a senior US official told the Bureau: ‘There haven’t been any noncombatant casualties for about a year, and assertions to the contrary are wrong. The most accurate information on counter-terror operations resides with the United States, and this list is wildly inaccurate. Those operations are designed to protect America and our allies, including Pakistan, from terrorists who continue to seek to kill innocents around the world.’

Yet civilians continue to die in US strikes. Our researchers have identified that on July 12 Abdul Jalil, a migrant worker on leave from Dubai, died in a drone attack which also killed eight suspected militants.

Who is John Brennan?

His name may not register widely outside Washington, but John Brennan is a pivotal figure in the US global war on terror. Officially he is Deputy Homeland Security Adviser, and Assistant to the President for Homeland Security and Counter-terrorism. Unofficially, he is the administration’s lead policy figure on the fight against al Qaeda and other terrorist threats.

Brennan served at the CIA for over 25 years, where he rose to be deputy executive director. A trusted adviser to Presidents Clinton and Bush, Brennan was touted as Obama’s first choice for CIA chief. However, his partial support for the ‘enhanced interrogation’ techniques sanctioned by the Bush administration reportedly led him to withdraw from the selection process.

The President’s deep trust in Brennan is apparent. On July 10 the adviser was dispatched to the Middle East to personally order the ailing and unpopular President Saleh of Yemen to step down. Brennan was speaking with the direct authority of the US president.

Recently Brennan unveiled the Washington’s global counter-terrorism strategy for the coming decade. This will rely heavily on drone strikes and Special Forces raids in countries such as Pakistan and Yemen, he said in a speech at Johns Hopkins University on June 29.

Header image of Reaper drone on an airstrip in Kandahar via Ministry of Defence.

The Bureau’s assessment of CIA drone strikes in Pakistan is a major ongoing project. If you would like receive updates on this issue click here to sign up to our newsletter.