The United States resumed its covert CIA drone campaign in Pakistan today, in an attack on two cars that killed at least four alleged militants.

The strike – the 233rd of Obama’s presidency, according to the Bureau’s data – also injured seven people when it struck the vehicles in Azam Warsak, near Wana in South Waziristan.

One local official described the dead to news agency AFP as ‘militants’ – but another official was unsure of their identities.

In December, the Agency’s Jonathan Banks was forced to leave the country after being ‘outed’ by lawyers trying to sue the CIA for its drone strikes.

Attempts to force out his successor failed in May 2011, and the name revealed on that occasion – Mark Carlton – was dismissed as incorrect.

Policy rift
There are signs of a rift among the US political classes on the use of drones.

Last week, retired Admiral Dennis Blair, the US Director of National Intelligence until last year, spoke out at a national security conference in Aspen, Colarado. Blair called for a major rethink of the drone war:

Because we’re alienating the countries concerned, because we’re treating countries just as places where we go attack groups that threaten us, we are threatening the prospects of long-term reform.’ 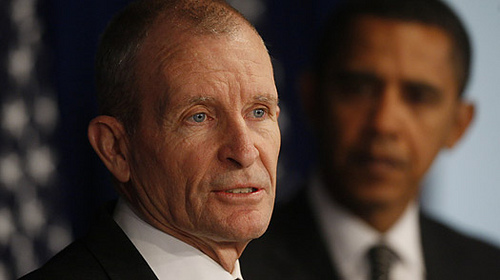 Blair’s views were swiftly rejected by current senior policy advisers to the Obama administration, some of whom instead called for the attacks to be intensified.

Lieutenant General Doug Lute, now the Deputy National Security Adviser for Afghanistan and Pakistan, told delegates that efforts ought to be stepped up following the death of Osama bin Laden:

This is a period of turbulence in an organization which is our arch enemy. This is a period, therefore, that all military doctrine suggests you need to go for the knockout punch. This is a time for us to double down on the opportunity.’