Some would say Sadaullah is lucky to be alive. When missiles from US drones tore into the family home in Machi Khel, North Waziristan, he survived. His wheelchair-bound uncle and his two cousins all died.

The attack on September 7 2009 was aimed at a militant leader who was never there (see Ob34). But 15-year-old student Sadaullah paid a terrible price for survival, losing both legs and an eye in the strike.

He is one of more than 1,100 people reported injured by the CIA’s attacks.

‘The injured who survive with their severed limbs, they often tell me, ‘you cannot really call me lucky’,’ says lawyer Mirza Shahzad Akbar, who represents Sadaullah in a legal case aimed at the CIA. ‘This is not London or Islamabad. There are no facilities for the disabled in Waziristan, such people can have zero opportunities ahead of them in life.’

Hurt by shrapnel
The Bureau has uncovered details of at least 1,117 people whose injuries were severe enough to merit a mention in press reports.

The injured are a mixture of militants and civilians, adults and children, though their names are rarely reported. Dozens have been injured in single attacks – though it is more common for half a dozen or so people to be hurt, injured by flying debris and shrapnel or trapped in falling buildings.

Occasionally a name or two emerges. When al Qaeda’s explosives expert Abu Musa al-Masri was killed on October 21 2009, little mention was made of the eight people also injured.


This is not London or Islamabad. There are no facilities for the disabled in Waziristan, such people can have zero opportunities ahead of them in life.
Mirza Shahzad Akbar, Lawyer

But on this occasion an agency photographer, accompanying the Pakistan military, happened to photograph two injured young girls. Six-year-old Sameeda Gul was hurt in her right leg, and Fatima Gul, 4, had head injuries. ‘Neither injury appeared to be life-threatening’, AP reported.

The highest recorded number of injuries occurred in two strikes in the early months of Obama’s presidency. An attack on an alleged Taliban training camp killed 31 militants and civilians. But up to 50 people were also injured  (see Ob4). Just a month later, a further 41 people were reported injured in a strike in Kurram Agency. 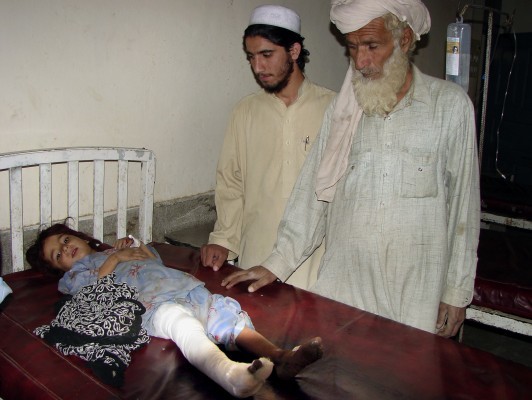 The fates of the injured are rarely known – especially those of militants. Many news reports mention private clinics where injured militants are taken, of which little is known.

‘Psychologically damaged’
There are suggestions that the CIA’s drone campaign in the tribal areas is harming people’s health in ways that go beyond physical injuries. Local doctors report a significant increase in people using tranquilizers and sleeping pills.

Already this month, there are reports of fresh additions to the list of those wounded. On August 10 a drone attack destroyed a car and housing compound killing at least 21 alleged militants. Three people were also injured.

To be kept up to date on this and other stories from the Bureau, please subscribe to our newsletter by clicking here.