The new Watchkeeper surveillance drone makes its maiden flight in the UK, April 14 2010.

The UK Ministry of Defence (MoD) will spend over half a billion pounds on acquiring and sustaining armed Reaper drones on operations in Afghanistan between 2007 and 2015, the Bureau of Investigative Journalism can confirm.

Ten years ago, CIA Predator drones are thought to have attacked a high-level Taliban meeting in Kabul, Afghanistan. The strike, which took place during the November 2001 invasion, is believed to be the first targeted assassination by an unmanned aircraft.

Since that date, the market for unmanned combat aerial vehicles (UCAVs) has grown rapidly, with the UK purchasing its first lethal drones in 2006: two Reapers from US manufacturer General Atomics. The UK MoD confirmed to the Bureau that it has budgeted to spend  a further £506m with the company by 2015 on its armed drones programme.

The MoD first deployed Reapers in Afghanistan in November 2007 – with the system armed the following spring. The RAF drones are currently providing more than 1,200 hours of air support per month for the UK’s Afghan operations.

In December 2010 the Prime Minister David Cameron announced that the number of UK-owned Reapers was to increase to ten. A Ministry of Defence spokesman said the purchase would allow the Royal Air Force to have three Reapers flying simultaneously. 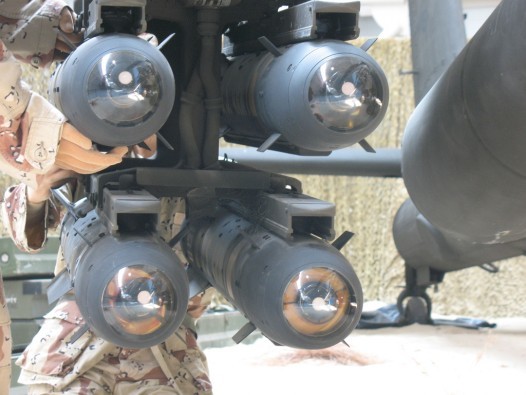 The aircraft are based in Kandahar. But their remote crews from 39 Squadron, Royal Air Force, operate from Creech Air Force Base in Nevada, USA. However, in May 2011 the MoD revealed plans to move control of the Reapers to the UK, when crews will be based at RAF Waddington in Lincolnshire.

Lethal attacks
To date UK-owned reapers have fired some 200 missiles during 23,400 hours of flight-time. And although the MoD says it does not hold a record of figures for insurgent casualties in Afghanistan, Cameron did provide some numbers on a December 2010 visit to Afghanistan, telling reporters that up to that time, 124 insurgents had been killed by British drone strikes.


UK-owned Reapers have fired some 200 missiles during 23,400 hours of flight-time, in support of UK operations in Afghanistan.

And in July 2011, the Guardian reported that ‘four Afghan civilians were mistakenly killed and two others injured in an attack by a remotely controlled RAF ‘drone’ targeting insurgent leaders in Helmand province’. The deaths were revealed following a Freedom of Information request by Drone Wars UK.

The Ministry of Defence is examining ways of expanding its combat drone fleet. The new Watchkeeper surveillance drone, which comes online next year, already has the capacity to be armed.

And the UK is also looking beyond Reaper with its new Scavenger project. According to the MoD this will ‘provide UK forces with a theatre-wide, persistent Intelligence, Surveillance and Reconnaissance (ISR) capability and an ability to attack land and maritime time-sensitive targets’. The new system is expected to enter service in 2020 and bids are underway.

At a briefing attended by the Bureau on November 16, Colonel David Evans, of the MoD, told an industry audience that General Atomics’ new Avenger drone and EADS’s Talarion system were under consideration for Scavenger, along with BAE System’s Mantis.

The MoD is also a major funder of Taranis, a collaborative project involving BAE Systems, Rolls Royce and others. The stealthy intercontinental Taranis drone, designed to be semi-autonomous, has been described as resembling ‘a spaceship out of Star Wars’.

To read the Bureau’s drone data in full click here.