Bell Pottinger claims to have worked for Prince Charles

It is an odd line-up. Prince Charles appears alongside the Sultan of Brunei; Nelson Mandela is lined up with the authoritarian president of Belarus.

These well known international leaders are pictured alongside another dozen high-profile figures in a presentation given to Bureau journalists by PR firm, Bell Pottinger. The slide is titled ‘Trusted by World Leaders’ and those pictured have all been helped by Bell Pottinger.

Links to royalty
During a meeting with undercover Bureau journalists, David Wilson, chairman of Bell Pottinger Public Relations, said: ‘Yes, we have links in there,’ in response to a question about connections with the royal family. ‘It may be that we seek something there,’ he added.

One known link between the firm and Clarence House is Elizabeth Buchanan, a former aide to Prince Charles whose salary was part-paid by Bell Pottinger. Ms Buchanan resigned as the prince’s private secretary in 2008, ten years after she joined his staff. She is now a trustee of the Prince’s Countryside Fund, while working as a ‘special adviser’ to Bell Pottinger.

Prince Andrew recently attended a dinner hosted by Bell Pottinger at the Connaught Hotel. The firm has previously advised Andrew’s ex-wife Sarah Ferguson, and Prince Edward visited the firm’s offices on November 22 for a meeting of the Duke of Edinburgh’s Award international foundation. Paul Bell, chief executive of the Bell Pottinger Group, is a trustee of the foundation.

Presidential elections
As well as Prince Charles, Bell Pottinger lists the late Nigerian president Yar’Adua among its former clients. The firm advised him during the time when the 2007 presidential elections took place – elections which went on to be widely condemned as flawed and violent by international observers and NGOs.

Chief EU observer Max van den Berg said the elections had ‘fallen far short’ of basic international standards. Leaked US diplomatic cables alleged the late president may have handed out bribes to ensure the outcome of the election. There is no suggestion Bell Pottinger had any knowledge of such matters. 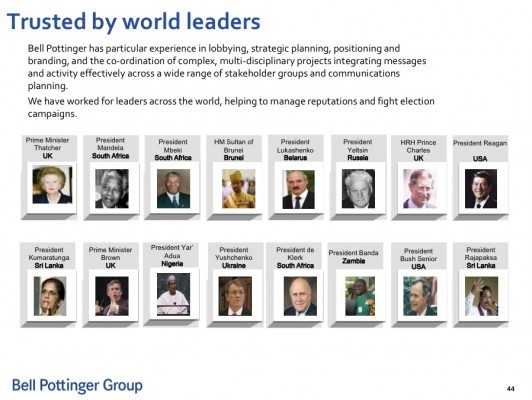 Elsewhere in Africa, the firm worked for the government of the Democratic Republic of Congo on various issues relating to mining in 2008, and for Sierra Leone. It helped rebrand the latter as ‘business friendly’, a contract which included putting on an investment forum in London in 2009 jointly organised with Tony Blair’s African governance initiative.

Working for business
Current clients include the Bahrain Economic Development Board and the Bermuda Business Forum. The BBF is currently touting Bermuda in London as a safe haven for hedge funds under threat of European regulation.

Bell Pottinger’s presentation also says it has run ‘country campaigns’ for the governments of Mauritius, Brazil, Austria, Russia, Finland, Turkey, the US, Japan and Malta, among others.

Other previous clients listed include the government of Afghanistan, the Ukraine Business Council, the Chilean Tourist Board, the Qatar Financial Centre, the Moroccan National Tourist Office and Pakistan Trade & Foreign Investment.