A London-based PR firm claimed it was planning to orchestrate a campaign by Kazakh youths against the pop singer Sting after he withdrew from a performance in the country.

After Sting cancelled an appearance in Kazakhstan in July, official Kazakh websites said the withdrawal was due to technical difficulties, despite the singer himself citing a briefing from Amnesty International about a crackdown on striking oil workers.

But senior staff from the UK lobbying firm BGR Gabara – which also works for the government of Bahrain – told undercover reporters from the Bureau that it was proposing Kazakh authorities generate an ‘online social media campaign’ by Kazakh ‘kids’ who were upset about the cancellation.

The plan was revealed in a meeting in which representatives from BGR Gabara believed they were talking to potential clients representing the government of Uzbekistan and the country’s cotton producers, in the light of a ‘commitment to reform’.

BGR Gabara later sent an email declining the business. ‘By virtue of taking on the Uzbek account we would do a disservice to our existing client, the government of Kazakhstan. As the people that we would have to talk to on behalf of the Uzbek authorities are exactly the same as those with whom we are currently engaging on behalf of the government of Kazakhstan, our message would be diluted and come across as repetitive if not serial.’

During the meeting, Mr Gabara,the firm’s chief executive and a former European Commission press officer, argued that the rock star Sting as ‘ill-informed’ and said: ‘Maybe it would have happened anyway, but by putting ourselves in a place where we are co-ordinating it, it will be that much stronger.’

He added: ‘Once we have generated the online social media campaign we have what it takes to generate print coverage to balance Amnesty International’s accusations that lead to this ill-informed decision by an artist to turn himself into the umpteenth self-appointed flagellator of the Kazakh authorities.’

However the Bureau was unable to locate coverage in the Kazakh press. Mr Gabara later told the reporters that the idea was rejected by Kazakhstan and therefore not executed. He explained that the event was in the forefront of his mind when speaking to the Bureau journalists and did not reflect his usual approach to PR.

Human rights violations
The US State Department criticised Kazakhstan last year over its record of human rights violations.  It highlighted ‘severe limits on citizens’ rights to change their government’, arbitrary arrests, prisoner torture, lack of an independent judiciary, restrictions on freedom of speech and pervasive corruption. 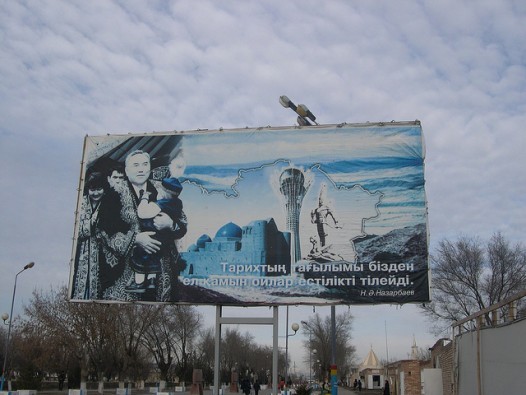 According to the US Justice Department’s compulsory register of lobbying contacts, BGR’s London and Washington branches are being paid $45,000 per month to represent Kazakhstan in the US, UK and Europe – a figure disputed by Mr Gabara.

There is no equivalent register in the UK.

During the meeting Mr Gabara explained that he always advises his clients to avoid press conferences.

‘Never engage with the press in general,’ he said. ‘You have no idea who is in the room.’ He instead advised briefings with select journalists who are ‘informed, educated and intelligent enough to see that there are two sides to the story,’ and ‘influential enough that their reporting can condition everyone else’s.’

He later clarified in a statement to the Bureau: ‘I often do advise against full-blown press conferences in favour of press briefings with smaller groups of journalists better informed about the matters at hand because they are more likely to be objective and balanced in their reporting.

‘I stressed several times that what we do is help our clients secure earned media coverage based on the merits of their actions. I said that our work is only as good as the content that our clients give.’

‘Phenomenal media exposure
During the meeting Mr Gabara boasted that his firm had achieved ‘phenomenal media exposure’ for Kazakhstan during its chairmanship of the Organisation for Security and Cooperation in Europe (OCSE), and had fed the media ‘a constant stream of information about what the country is doing to improve’.

‘Every op-ed that you read that has come out of Kazakhstan, signed by Nazarbayev, signed by the minister of foreign affairs, signed by the ambassador in the EU, the ambassador in Washington, is our drive, our work,’ he said. He later told the reporters, when asked to clarify that remark: ‘I was clearly wrong if I said that we were responsible for every op-ed that comes out of Kazakhstan.’ He explained he was ‘pitching’ for new clients, and his remarks should be seen in that context.

He later told the Bureau his comments were off-the-cuff and needed to be taken in the context of a much longer meeting.

In May the Washington-based Hill carried an op-ed by Kazahstan’s ambassador to the US, entitled ‘Kazakhstan making steady progress against corruption’. When asked to comment on his firm’s involvement in the piece, Mr Gabara said: ‘The process was and always is entirely collaborative and transparent. We may suggest in a draft what an official might say but the government decides what its public utterances are, not us. Our involvement is fully disclosed.

During the meeting with the undercover reporters Mr Gabara drew heavily on his firm’s experience representing the government of Kazakhstan, explaining it had engineered a meeting between US President Obama and Kazakhstan’s President Nursultan Nazabayev at a Washington nuclear non-proliferation summit in April 2011.

‘President Nazabayev was the most visible head of state in Washington at that summit,’ he said. ‘Out of 45 heads of state [Obama] met only five on a bilateral basis. Nazarbayev was one of those – not by mistake.’

Mr Gabara later told the Bureau: ‘What I meant by that was that many people had worked hard to make this happen.’