The Independent. Read the story.
Find out how to use the Bureau’s work

One of Britain’s largest lobbying companies has been secretly recorded boasting about its access to the heart of Government and how it uses "dark arts" to bury bad coverage and influence public opinion.

An undercover investigation by the Bureau, published in the Independent today, has taped senior executives at Bell Pottinger:

Reporters from the Bureau posed as agents for the government of Uzbekistan – a brutal dictatorship responsible for killings, human rights violations and child labour – and representatives of its cotton industry in a bid to discover what promises British lobbying and public relations firms were prepared to make when pitching to clients; what techniques they use; and and how much of their work is open to public scrutiny.

'The next big scandal waiting to happen'

In Uzbekistan, child labour is allegedly used in cotton fields to fulfil state quotas.  The country also has a terrible human rights record: the think tank Freedom House put it on its 2011 list of the Worst of the Worst repressive regimes.

The Bureau contacted ten London firms. Two actively refused to take the business, several others never replied, while five including Bell Pottinger appeared to be keen to work with the fictitious Uzbek representatives. Bell Pottinger quoted "£1 million-plus" as a fee for carrying out the work.

The claims of the representatives – which were secretly recorded and are published in the Independent newspaper this week – will add to mounting concerns that an absence of regulation has made London the global centre for "reputation laundering", where lobbyists work behind the scenes on behalf of the world’s most controversial regimes.

David Cameron pledged to tackle lobbying five years ago and then again last year, saying it was "the next big scandal waiting to happen" and "has tainted our politics for too long, an issue that exposes the far-too-cosy relationship between politics, government, business and money". He said he wanted to "shine the light of transparency" on lobbying so that politics "comes clean about who is buying power and influence".

How did we investigate Bell Pottinger? Back in 2011 the Bureau posed as a team of investors with close links to the Uzbekistan government.

During two undercover meetings in June and July 2011 at its Chancery Lane offices, senior Bell Pottinger executives showed no signs of being deterred by Uzbekistan’s dire image. They made it clear that the Uzbek government would need to put genuine reforms in place if it was to improve its reputation and then outlined how it could work with the Government, Parliament and the media to do so.

They talked openly about the work the firm had done with other regimes with questionable human rights records including Sri Lanka and Belarus and about how they could navigate the corridors of power for clients.

Tim Collins, managing director of Bell Pottinger Public Affairs, told the undercover reporters he used to be Mr Llewellyn’s boss in Conservative Central Office and had worked with Mr Cameron and Mr Osborne in the Conservative Research Department.

"I’ve been working with people like Steve Hilton, David Cameron, George Osborne, for 20-years plus," he said. "There is not a problem getting the messages through."

His colleague David Wilson boasted that the firm was the ‘most powerful public affairs business in the country.’

Asked whether he could help organise a meeting between Mr Cameron and the Uzbek president – despite protocol dictating that such meetings are organised by ambassadors – he said: "We can facilitate that."

Mr Collins later clarified that such a meeting might be an "end point" to aim for, once the country was seen to be genuinely improving its human rights record.

During the undercover meeting, Bell Pottinger – whose chairman is Margaret Thatcher’s former media adviser Lord (Tim) Bell – claimed to have used its influence on behalf of the engineering firm Dyson to ask Mr Cameron to complain about copyright infringement to the Chinese premier Wen Jiabao during a state visit in June 2011.

"We were rung up at 2.30 on a Friday afternoon, by one of our clients, Dyson," Mr Collins explained. "He said 'We’ve got a huge issue and that is that a lot of our products are being ripped off in China' … On the Saturday David Cameron raised it with the Chinese prime minister."

He added that, "He [Cameron] was doing it because we asked him to do it," and because the issue was in the wider national interest.

"In terms of very fast turnaround and getting things done right at the top of government if you’ve got the right message yes we can do it," he said.

Mr Collins also recommended a meeting with Daniel Finkelstein, the Times chief leader writer – who he said was very close to Mr Cameron.

"He will sit down and have lunch with just about anybody," he said. "That doesn’t mean he’s going to agree with them… but occasionally something out of that lunch or dinner will get dropped into a future column."

Joint events could be held with influential think-tanks close to government, such as Policy Exchange, the firm suggested. Another strategy would include passing information to key academics "so that they are then blogging the right messages out there, so it’s actually coming from an independent," said Mr Wilson.

Mr Finkelstein said: "I am flattered if anyone thinks I am interesting enough to have lunch with. But anyone promoting either undemocratic or anti-social policies would find me a pretty closed door and hasn’t to my knowledge come knocking."

"We’ve got all sorts of dark arts," added Mr Collins. "I told [David Wilson] he couldn’t put them in the written presentation because it’s embarrassing if it gets out, because he’s so good at it."

A presentation shown during the meeting said the firm could "create and maintain third party blogs" – blogs that appeared to be independent. These would contain positive content and popular key words that would rank highly in Google searches.

The pair also explained how the firm enables government videos and articles to move to the top of internet searches, while less favourable stories can move down the rankings.

"The ambition obviously is to drown out that negative content and make sure that you have positive content out there online," Mr Wilson said.

The firm cited past examples of its work, including manipulating Google rankings for East African money transfer company Dahabshiil. Bell Pottinger executives said they had ensured references to a former Dahabshiil employee subsequently detained in Guantanamo Bay because of alleged links to al-Qaeda, disappeared from the first ten pages of a Google search for Dahabshiil.

Another defensive method cited in the meeting was the use of politicians to attack a broadcaster.

"There are a lot of people in Parliament who can’t stand Channel 4 and can’t stand Dispatches," Mr Collins said.

"So actually if there are any inaccuracies, even if they’re fairly minor, you can actually work with some people who have a track record of not liking Channel 4, wanting to score points against Channel 4 [who will say] 'here is another instance of Channel 4 over-reaching themselves and putting out stuff they haven’t properly checked.'"

For its investigation, the Bureau chose to approach Bell Pottinger posing as representatives of Uzbekistan’s business and government.

Uzbekistan has recently expelled Human Rights Watch. Including the regime in its Worst of the Worst list of repressive regimes in 2011, the US think-tank Freedom House said: "Uzbekistan’s government continued to suppress all political opposition and restrict independent business activity in 2010. The few remaining civic activists and critical journalists in the country faced prosecution, fines, and lengthy prison terms."

In addition, Uzbekistan’s cotton is the subject of an international boycott by several clothing manufacturers because the country still allegedly uses forced labour, including child labour, in its harvest. 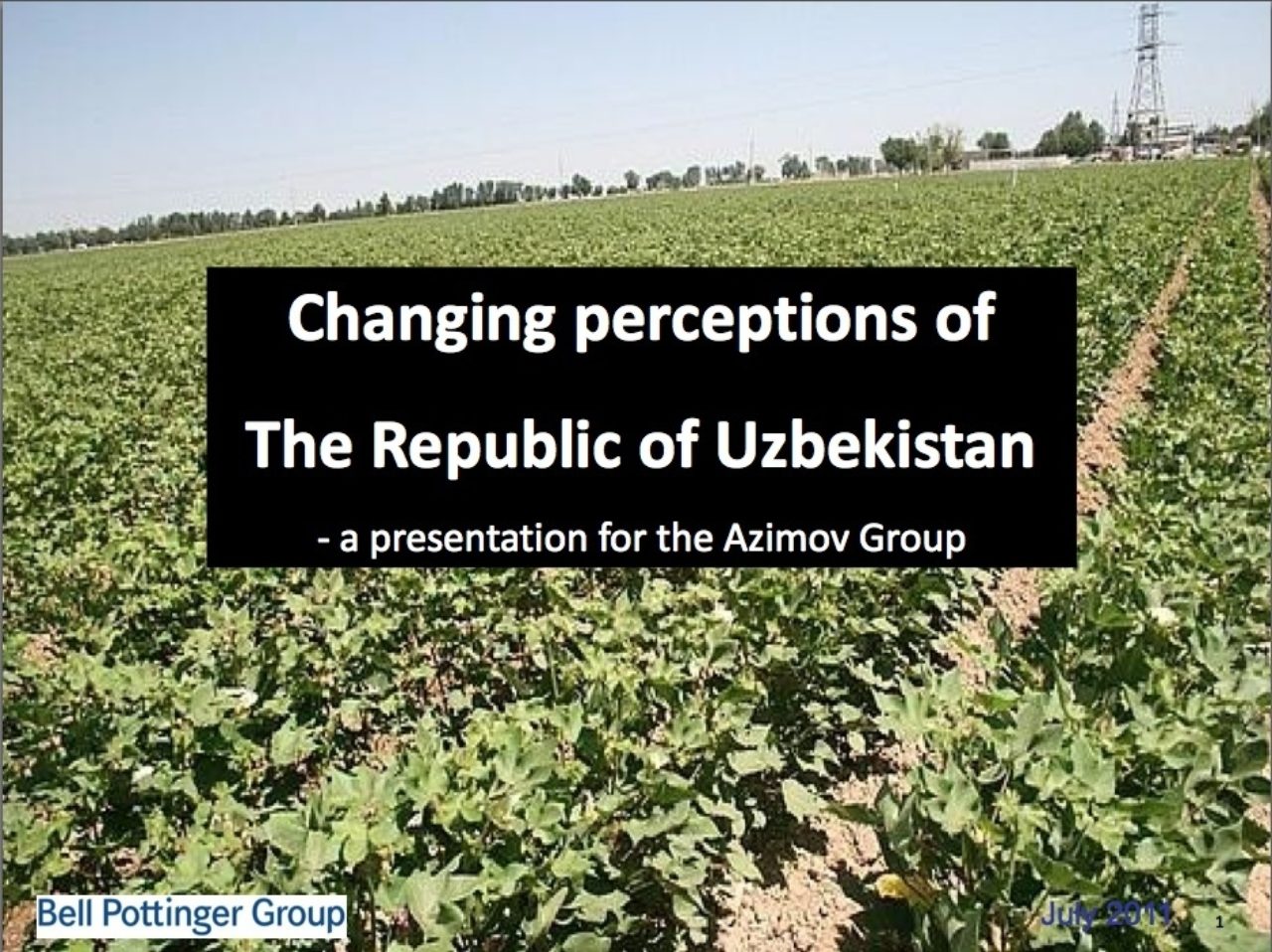 "Changing Perceptions of Uzbekistan": how Bell Pottinger would run a £1m plus campaign to drown out negative content

Bureau journalists posed as members of the "Azimov Group" – a group of British and Eastern European investors concerned with exporting cotton textiles. They claimed they had been tasked by the Uzbek government with improving the country’s image in the UK, and that the government would be committed to reform.

During two undercover meetings none of the Bell Pottinger representatives expressed any serious doubts about taking on a client with such a dire public image.

"A number of [our client] governments have had serious reputational issues," said Mr Collins.

But he also stressed a need for genuine commitment to reform. "Everything we are recommending is predicated on the agreement by the government to change," he said. "[That] justifies why a PR company is representing a country which previously people shouldn’t have been talking to… now it actually wants to change it is fully acceptable."

Another executive stressed, whilst talking about one of the firm’s clients: "I wouldn’t actually represent a client who I didn’t believe."

Bell Pottinger told the reporters that it had previously helped convince the EU that Belarus was committed to reform. But shortly after the EU lifted a travel ban on Belarus’ president, the country went back to its old ways and the ban was eventually re-instated. Last week two Belarus courts sentenced two men to death despite pleas for mercy and an international outcry.

Changes did not need to be fast, Mr Collins added. "As long as you can see that each year is a little better than before, that’s fine."

Reputations do not come cheap, however. "A million pounds plus," is what Mr Wilson quoted to do the job. "This is certainly a £100,000 a month campaign to make it very effective."

This would buy a media relations campaign, on-line reputation management and the public affairs team "working with you on a governmental level".

The country should stress its position as an emerging market to help sell the message to the UK, he suggested.

"To the Western world it’s a developing market so you can always have the message that… we are changing with the times, we are emerging, learning as a nation and growing," he said.

He added: "Britain has this sort of moral ethic it thinks it can impose upon the world still because of our colonial background and the Commonwealth. We forget that 100 years ago we had kids working in cotton mills here."

Nobody knows who paid us

Asked whether the firm would be prepared to work for the Azimov Group without knowing the identity of the campaign’s ultimate funders, Mr Wilson said: "If the media asks us who your client is, there has to be an audit trail." But a few seconds later he admitted: "In our work for Belarus, nobody knows who paid us."

Lord Bell was provided with details last Friday morning of what his executives had told the undercover reporters.

He did not provide a direct reply. His lawyers, Carter Ruck, sent a legal letter earlier today, suggesting the Bureau’s journalism was unethical.

A spokeswoman for the Prime Minister said: "It is simply not true that Bell Pottinger or indeed any other lobbying company has any influence on government policy."

A Downing Street source said that Dyson’s concerns had been raised with the Chinese Premier, that it was a legitimate matter to raise and that they were unaware of Bell Pottinger’s involvement.

Bell Pottinger changed ownership after a management buyout in 2012, the year after this story was published.