A demonstration against Sri Lankan government.

Senior executives at Bell Pottinger told undercover reporters that they were so influential that they had written a key note speech given by the Sri Lankan President to the United Nations.

During the address by President Mahinda Rajapaksa last year, which the company said was used in preference to one prepared by the Sri Lankan foreign ministry, the president suggested rules governing the humanitarian conduct of war should be re-examined. He described his troops’ action against Tamil Tiger separatists as humanitarian.

President Rajapaksa also claimed in the speech that a Commission established by the government to look into the last years of the civil war, was giving ‘full expression to the principles of accountability’.

Heavily criticised
The Commission has been heavily criticised by human rights groups including Amnesty International because it does not have a mandate to hold individuals to account for war crimes.

‘We had a team working in the president’s office. We wrote the president’s speech to the UN last year which was very well received … it went a long way to taking the country where it needed to go,’ said David Wilson, chairman of Bell Pottinger Public Relations, during the undercover meeting with the Bureau.

But during the meeting Mr Wilson seemed to agree with Amnesty, describing the Commission as having a ‘fundamental flaw in its remit in investigating what has gone on in the past, to try to bury the past.’ 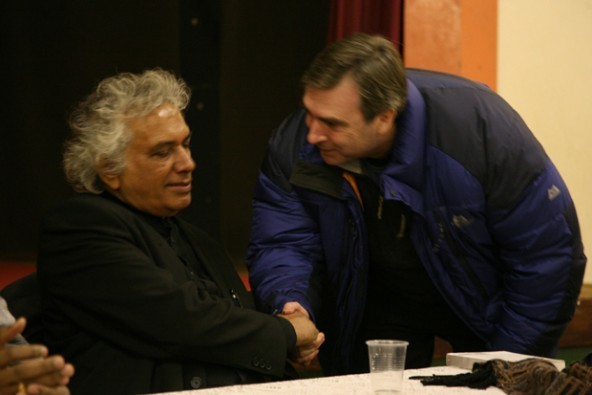 Days before President Rajapaksa’s arrival in London in December 2010, Tim Ryan chairman of Bell Pottinger International, and a colleague attended an open political meeting in Harrow organised by the BTF and the Nava Sama Samaja (New Social Equality) Party.

Standing out
Gobi Ratnam, a Tamil journalist who chaired the event, titled How Powerful is Mahinda in his Second Term? said the pair stood out as the only white people present and were eventually questioned by some of the delegates.


We had a team working in the president’s office. We wrote the president’s speech to the UN last year which was very well received … it went a long way to taking the country where it needed to go.
David Wilson, Bell Pottinger Public Relations

He said the two said they were from Bell Pottinger. ‘They said they wanted to listen to our problems, to learn and help the Sri Lankan people,’ said Mr Ratnam. ‘A lot of people were talking to them. A few there knew about this firm and tried to warn people not to give out too many details.’

Dr Wickremabahu Karunaratne, the Singhalese general secretary of the NSS Party who stood for president in the last election, was visiting the country from Sri Lanka and gave a speech at the meeting. He called for Tamil forces to join a new alliance of opposition members and breakaway groups to challenge the government – comments that were widely reported.

Dr Karunaratne spoke with Mr Ryan after the speech. He told the Bureau he had not known Mr Ryan was working for the Rajapaska government prior to the meeting, but ‘he made me aware of that’.

Mr Ryan told him he was ‘collecting information to help the government campaign,’ he added. Bell Pottinger refutes this. It says its representatives were interested as part of their brief to learn and to understand the views of the Sri Lankan diaspora in the UK.

The BTF claims Bell Pottinger representatives also attended a Tamil Remembrance event at London’s Excel Centre on November 27, 2010. The firm has not confirmed this.

There is no suggestion that Bell Pottinger did anything illegal in its dealings with the Sri Lankan government.

Part of Bell Pottinger’s remit was to influence the foreign media in favour of the Sri Lankan government.

The firm sub-contracted its work in the US to the firm Qorvis, which placed an op-ed by President Rajapaksa in the Philadelphia Inquirer in December 2009 entitled ‘How Sri Lnka Defeated Terrorism’. In the piece the president suggested Sri Lanka had provided a ‘workable model’ for defeating terrorism, from which the international community could gain ‘valuable insight’.

A few months later in February 2010, the Wall Street Journal published a piece that discussed the ‘peaceful’ election which returned Rajapaksa to power, and prompted several letters complaining of government violence against its critics.

In the UK Bell Pottinger appears to have been far less successful in terms of placing the government’s opinions. In December 2009 the Guardian claimed the firm pitched a piece that said: ‘We are ready to engage positively with anyone and everyone around the world who wishes to help us achieve our dream of a united and prosperous land and enable Sri Lanka to take its rightful place in the world as an island of unsurpassed beauty, enterprise and now peace.’ It was never published.

However, it seems to have had more success in getting coverage of Sri Lanka as an investment opportunity, particularly following a series of interviews it arranged with Sri Lanka’s Central Bank chief, Ajith Nirvard Cabraal.

In an interview with the BBC’s Lesley Curwen ahead of a meeting with European investors in February 2010, Mr Cabraal ‘addressed human rights concerns that may damage confidence in potential backers’. Euromoney published an article titled ‘Sri Lanka follows might with money’ based on a Cabraal interview around the same time, while The Banker also ran a piece on Cabraal.

Other services Bell Pottinger claims to have provided to the Sri Lankan government included helping with re-designing its website and establishing an on-line ‘friends of Sri Lanka’ group.

Bell Pottinger is not the only British firm that worked for the Sri Lankan government during the conflict and its aftermath. Representation Plus promoted the country as a tourist destination for two years from December 2008.

During the bloody final stages of the conflict in April 2009 the company issued a press release announcing that the tourism industry was providing food to internally displaced people at the request of President Rajapaksa.

A spokesperson said: ‘The Sri Lanka Tourism Promotion Bureau has not been a client since December 2010.’