Awash with money. Financial services are well represented in the House of Lords.

The House of Lords is awash with voices from the City. According to research by the Bureau, 16% of active peers benefit from links to the financial services sector.

A trawl of the register of Lords’ interests shows that 124 out of 775 active unelected members have financial services clients or hold paid positions in finance firms. The figure does not include members who hold unpaid advisory positions on finance companies or lobby groups.

Swiss bank UBS is among the best-connected City institutions with three Conservative peers on its payroll: Lord Brittan of Spennithorne, who is its vice-chairman; Lord Garel-Jones, who is managing director; and Lord Waldegrave of North Hill, who is registered as an adviser.


Politicians are weaker than the financial industry.
Lord McFall

Eyebrows were raised in 2010 when Lord McFall, until then the Treasury select committee’s longstanding “chief inquisitor”, became a non-executive director of NBNK Investments, a new bank set up to bid for assets from nationalised banks. This month it was announced the bank would close. The peer has also become a paid senior adviser to KPMG on regulation and corporate governance and and an unpaid member of the advisory council of powerful finance lobby outfit TheCityUK.

McFall was quoted last year saying that “politicians are weaker than the financial industry”. They needed more “authority and independence” if they were going to be successful in imposing tougher regulation on banks, he said.

Asked why he had joined TheCityUK, he told the Bureau: ‘Finding myself in this space between the industry and the political/social environment has been the norm for me.’ He pointed to his interest in payment protection insurance and chairmanship of the Workplace Retirement Income Commission.

‘In light of my challenging views on such matters I was asked to bring my perspective to the advisory board,’ he said. ‘I was happy to do so since my relationship involves no non-exec [functions], remuneration or benefits or lobbying interests.’

Related article: Get the data: Lords for hire

The peer’s role with TheCityUK  was not initially listed on the register of Lords’ interests, although it was added after the Bureau contacted Lord McFall to enquire about the omission.

Peers review the Finance Bill
The banking sector’s influence doesn’t stop at the red benches. Committees scrutinising issues of particular importance to the financial services industry are also packed with Lords with links to the sector.


The banking sector’s influence doesn’t stop at the red benches. Committees scrutinising issues of particular importance to the financial services industry are also packed with Lords with links to the sector.

Four of the 11 members of the Lords committee set up to consider the 2011 finance bill, for example, held positions in banks, and a fifth was about to join a bank. The Finance Act gave large tax breaks to businesses with offshore interests, including multinational banks and insurers.

On the committee were Lord Griffiths, a Goldman Sachs director, Lord Hollick, a partner at private bank GP Bullhound, Lord MacGregor, who was at the time co-chairman of the UK food and agriculture advisory board of Rabobank International and Lord McFall.

Lady Noakes’ appointment as a director of the Royal Bank of Scotland was announced shortly after the committee reported.

Other members in the pay of the finance sector  included the late Lord Maples, who at the time was the chairman of a venture capital trust – and previously founded Maples and Calder, one of the world’s largest offshore law firms – and Lord Wakeham, an adviser to LEK Consulting, a firm with a large client base in the financial services industry.

This gave Lords who were paid by the finance sector an overwhelming majority on the committee.

Paul Moore, the former HBOS executive who was sacked after warning about the bank’s risky sales culture, said: ‘If you have five people with potential conflicts of interest it is extremely difficult to see how justice can be seen to be done. Nobody denies these committees need some form of expertise but five bankers out of 11 is far too many. Most members of the general public would think that is wrong.’

McFall said: ‘Members with an employment or financial interest in a particular sector are not forbidden from taking part in parliamentary work relevant to those interests, subject of course to qualifications.’

Baroness Wheatcroft is a paid adviser to lobbyist-law firm DLA Piper, which represents some of the largest financial firms in the world. Since the committee disbanded last year, the Baroness has also become a non-executive director at wealth management firm St James’s Place, and a member of the advisory board of Pelham Bell Pottinger, a financial and corporate communications firm.

Also scrutinising the Bill was Lord Skidelsky, a non-executive director of Rusnano Capital AG, a Swiss-registered investment firm and Baroness Drake, whose register entry says that her fee as a member of the Walker Guidelines Monitoring Group for UK private equity is paid by the British Venture Capital Association.


Peers and TheCityUK
Labour peer Lord McFall, a former Treasury select committee chairman, became an unpaid member of the advisory council of TheCityUK in early January 2012, weeks after the scrutiny committee he sat on published its report on the Draft Finance Bill. 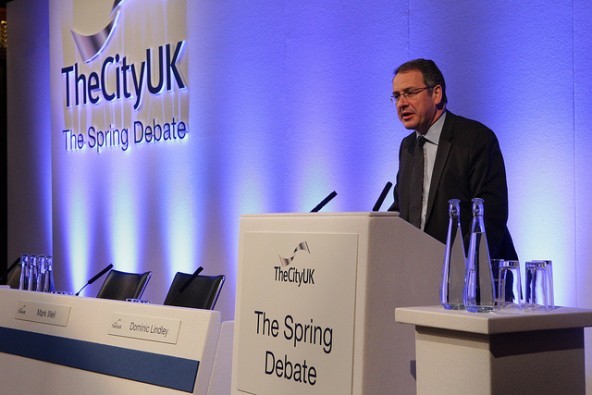 Lord McFall is one of five peers who currently hold positions within TheCityUK. According to the organisation’s own materials, the advisory council, which Lord McFall has joined, ‘guides the TheCityUK’s strategy and holds the organisation to account’.

The advisory council works with the board of directors to ensure it achieves its objectives.

Financial firms and trade associations pay extra membership fees to sit on the council and gain ‘access to senior domestic and international influencers and decision-makers’.

The advisory council’s deputy chairman is Lord Levene, a former adviser to John Major. Until recently, he also sat on the House of Lords’ economic affairs committee, at the time when it cross-examined Bank of England governor Mervyn King on aspects of banking.

A spokesman told the Bureau: ‘Lord Levene is not an “office holder” of TheCityUK and he receives no benefits or remuneration for his role.’

He added: ‘It is not the role of the advisory board to involve itself in lobbying.’

Related article: Streets paved with gold – The local authority working for the banks