Chris Cummings, CEO of TheCityUK, was formerly employed by PricewaterhouseCoopers

In 2009 a report from a group of industry representatives chaired by then chancellor Alistair Darling and former Citigroup chairman Sir Winfried Bischoff recommended the creation of a new independent body to ‘promote the industry at home and overseas’.

The report also recommended the group should have a ‘formal link’ to a forum, led by government, which would focus on strategic issues relating to the financial industry.

But the outcome was the formation of a single organisation – TheCityUK.

Led by industry rather than government, it lobbies on tax, regulation and trade policy. It is heavily financed by the City of London Corporation, and its Overseas Promotion Committee is the sector advisory group to UK Trade & Industry (UKTI), which has formally outsourced to it the role of promoting the sector overseas.

‘Policymaker engagement‘ is how TheCityUK body describes its key role and it promises its members access to policymakers in return for extra fees.

Its ‘sponsor members’ are guaranteed a place on its advisory council and ‘access to senior domestic and international influencers and decision makers’.

Influence over financial regulation
Sitting on the organisation’s advisory board and various committees and working groups are five members of the House of Lords, regulators and senior civil servants as well as representatives from key private financial organisations.

They include representatives of the Financial Services Authority (FSA), which regulates the industry, as well as personnel from the Treasury and Department of Business, Innovation and Skills.

Four senior civil servants, including the Treasury’s director general of financial services Jonathan Taylor, and a member of the FSA are listed as observer members of the TheCityUK’s International Regulatory Strategy Group (IRSG) on the body’s website. Despite the name, the group lobbies on domestic as well as international regulation.

Taylor is a former director general of the London Investment Banking Association and a former banker with UBS.

Two other senior Treasury officials sat on the group until recently: Michael Ellam, now the chair of the EU’s financial services regulation committee and Tom Scholar, second permanent secretary in the Treasury.

All of this engagement with high flyers has an impact. At a TheCityUK meeting last October, financial secretary to the Treasury Mark Hoban openly acknowledged the group’s leading role in regulatory policy.

The IRSG was ‘uniquely placed to steer a route to reform that balances regulation and competitiveness, stability and growth,’ he said, describing it as ‘an independent body that recognises the urgent need for reform and also the need for willing engagement from the industry.’

A few months earlier he had asked the IRSG to ‘go further’ in lobbying on behalf of light regulation in Europe – arguing that ‘fund managers across the world will not take the time to negotiate difficult regulations’.

According to documents recently obtained by the Financial Times, the IRSG went on to brief against David Cameron after the prime minister called for the UK to be allowed to impose rules on banks that went above and beyond EU standards.

A Treasury spokesman said: ‘Regular engagement with the financial and professional services industries is an essential part of the policymaking and consultation process. The IRSG is one such forum through which these discussions take place. Surely it would be even more strange if policy decisions were taken without consulting industry?’ 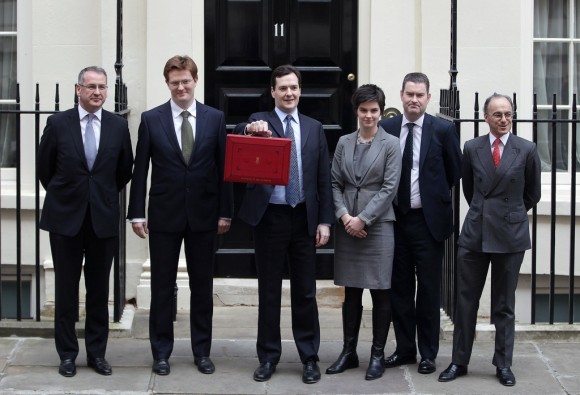 Financial secretary to the Treasury Mark Hoban (left) with the Treasury’s ministerial team.

The IRSG is chaired by Lloyd’s non-executive director André Villeneuve and includes more than 40 representatives of banks, insurers, industry associations and corporate lawyers. It also includes the man who has been described as the UK’s most powerful lobbyist: Stuart Fraser, who was until recently chairman of the City of London’s policy and resources committee, sits on the committee. Membership is by invitation only.

TheCityUK consists of some 35 heads of public affairs and policy at banks, corporate law firms, insurers and the head of PR at the City of London corporation.

The IRSG  has various groups lobbying in specific areas, such as EU regulation and tax. In 2011 the chairs of three IRSG working groups met Mark Hoban to discuss developments in Europe, in which they identified ‘areas for joint activity between the City and HM Treasury’. The meeting was described by Hoban on the transparency register as a ‘catch up meeting’ with the City of London Corporation – although the two are not the same.

The IRSG has also reportedly warned Mark Hoban that banking levies would damage the sector’s competitiveness.

TheCityUK also boasts a public affairs group which ‘brings policymakers together with senior industry representatives for conversation on the current public and parliamentary debate on financial services … the main policy themes typically discussed are tax, regulation and skills.’ The group consists of over 35 heads of public affairs and policy at banks, corporate law firms, insurers and the head of PR at the City of London corporation.

Despite these numerous connections to key politicians, TheCityUK has also hired PR firm Cicero to ‘engage with policymakers in London, Brussels, Edinburgh, Cardiff, Belfast and in local councils across the UK on a range of policies affecting the financial sector including trade, tax, regulation and skills.’ It claims that it has arranged ‘1-to-1 meetings with key policymaker targets across all political parties and relevant government departments’.

Access to senior domestic and international influencers and decision-makers
Current and former civil servants, government advisers and members of quangos who have had roles listed in TheCityUK include:

• Edward Oakden, a managing director at UKTI, is a former observer on the board of directors.

• Sir Andrew Cahn, who was head of UKTI until 2010, sits on the board of directors.

• Gerry Grimstone, Margaret Thatcher’s ‘privatisation guru’, is an advisory council member. He also sits on the Ministry of Defence’s Defence Board.

• Richard Gillingwater, a former head of the government’s Shareholder Executive, is an advisory council member.