The ISI no longer responds to the CIA’s faxes on drones.

Pakistan’s Foreign Ministry has bluntly rejected claims by the Obama administration that it tacitly approves CIA drone strikes on its territory, saying that ‘drone attacks are illegal, counterproductive, in contravention of international law and a violation of Pakistani sovereignty.’

The remarks came after the Wall Street Journal revealed that US claims of legality appear built on a monthly fax from the CIA to its ISI counterpart which goes unanswered, and on Pakistan’s apparent acceptance of  ‘no fly zones’ over the tribal areas which enable the drones to operate.

Islamabad’s foreign minister Hina Rabbani Khar also waded into the fray, telling an audience in New York that  ‘What the drones are trying to achieve, we may not disagree… If they’re going for terrorists — we do not disagree. But we have to find ways which are lawful, which are legal. The use of unilateral strikes on Pakistani territory is illegal.’

According to the Bureau’s data, at least 2,570 people have died since 2004 in 346 US drone strikes. Senior Pakistani officials have labelled the attacks ‘illegal’ on more than a dozen occasions this year. Pakistan’s High Commissioner to the UK recently told the Guardian that CIA strikes were ‘a violation of the UN charter.’ And on September 24 President Asif Ali Zardari, speaking at the UN General Assembly said that ‘drone strikes and civilian casualties on our territory add to the complexity of our battle for hearts and minds through this epic struggle.’

Despite these public protests, US officials still hint that they have Pakistan’s tacit permission to carry out the attacks. Obama’s chief counter-terrorism adviser John Brennan insisted recently that ‘We do not use force whenever we want, wherever we want… The United States of America respects national sovereignty and international law.’


Drone attacks are illegal, counterproductive, in contravention of international law and a violation of Pakistani sovereignty.’
Pakistan Foreign Ministry September 28 2012

According to an investigation by the Wall Street Journal, that ‘respect’ rests on tenuous grounds, and it is causing concern among some senior Obama administration officials about the legality of the attacks. One described US policy as ‘cowboy behaviour’.

No Pakistani officials have any input or say into the CIA bombing campaign, the paper reports. Instead, once a month the CIA sends a fax to Pakistan’s spy agency the ISI outlining ‘the boundaries of the airspace the drones would use—large areas along the Pakistan-Afghanistan border referred to as flight “boxes” because they are shaped like three-dimensional rectangles in the sky.’

For at least 17 months nobody at the ISI has acknowledged or answered the faxes.

Kill Boxes
Those ‘flight boxes’ are better known as Restricted Operating Zones, precise military jargon for a three-dimensional air exclusion or ‘kill zone’. These enable other air traffic to go safely over or around ongoing combat or surveillance operations. Pakistan and the US may never have signed a formal agreement on the drone strikes – but in order to avoid collision between aircraft such zones have been in place over  the Federally Administered Tribal Area (FATA), for some years.

Their existence is confirmed in a secret US diplomatic cable dated March 24 2008. Admiral Mike Mullen, US chairman of the joint chiefs of staff, was in Islamabad to meet with Pakistan’s chief of the army staff (and now head of the army) General Ashfaq Kayani. Mullen secretly ‘asked Kayani for his help in approving a third Restricted Operating Zone for US aircraft over the FATA,’ the US embassy noted at the time. 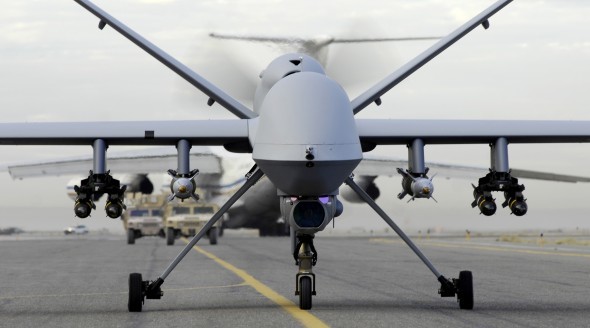 The zones are not connected to the US and NATO air traffic corridor above Pakistan. Another secret cable dated December 14 2007 identifies that route as The Boulevard, noting that up to 150 Coalition aircraft were then using it daily.

All but two CIA strikes have taken place inside FATA, suggesting that the CIA restricts itself to defined ‘kill boxes.’ US officials believe they have ‘permission’ from Islamabad to carry out the drone strikes because ‘Pakistan continues to clear airspace in the targeted areas,’ the Wall Street Journal reports.

However a western defence analyst – who asked to remain anonymous because of his links to the Pakistan military – warned that consent should not simply be assumed. ‘They [Pakistan] know full well that they would have something set on them if they tried to enter these boxes. It’s more likely the Pakistan air force and army are instead turning a blind eye.’

Former president Pervez Musharraf recently said that regardless of what it wanted, Pakistan was too weak militarily to oppose US attacks, and certainly could not shoot down the CIA’s drones as some proposed: ‘You cannot do it… If the air force does it, let’s see how they confront the joint might of the coalition forces.’

There is concern too in some parts of Washington. US congressman Dennis Kucinich told the Bureau that he and others in Congress questioned the legality of US strikes: ‘If in fact Pakistan has made this request and asked us to stop and we continue this bombing, then we are at war with Pakistan.’

A Foreign Ministry spokesperson later said that Islamabad ‘categorically rejected the insinuation made in the [Wall Street Journal] report’ and that ‘there can be no question of Pakistan’s agreement to such attacks.’