A US drone strike in Shin Warsak, South Waziristan on December 1 2012 marked the 300th drone strike in Pakistan of Barack Obama’s presidency, according to Bureau research.

The attack was the second since President Obama’s re-election on November 6. It reportedly killed Abdul Rehman al-Zaman Yemeni, described as an al Qaeda commander, along with up to three others.

Although the pace of strikes has slowed considerably this year, CIA attacks have struck Pakistan’s tribal areas on average once every five days during Obama’s first term – six times more than under George W Bush. Here, we look at the key moments of Obama’s drone campaign.

When Barack Obama entered the White House on January 20 2009, his national security team was already planning a massive increase in drone strikes. On the campaign trail Obama mentioned taking the war to Pakistan in over 30 speeches.

Obama’s drone campaign started three days into his presidency. But of the 12 – 23 reportedly killed in the pair of strikes, at least 12 were reportedly civilians, including four children. When the president was told of the civilian deaths he was ‘not a happy man’, Newsweek later reported. But this didn’t prevent the CIA from launching more covert strikes in the first year of Obama’s presidency than in all of Bush’s eight-year tenure.

Throughout the spring and summer, drones hunted the Pakistani Taliban (TTP) and its leader Baitullah Mehsud, as the TTP carried out terrorist attacks on Pakistani targets and briefly formed an alliance with the Afghan Taliban at the request of al Qaeda. The CIA eventually killed Baitullah Mehsud – and his wife – on August 5.

As Pakistan’s government prepared to send troops into South Waziristan to flush out the TTP in October, drones focused on the Haqqani Network, which was attacking US and Nato troops over the border in Afghanistan. 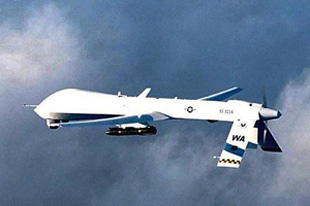 But these scalps came at a cost: at least 119 civilians were reportedly killed between Obama’s inauguration and the year’s end. And some strikes appeared to adopt shocking tactics, including two incidents where missiles hit funerals. The second such strike, reportedly killing at least five, occurred eight days after Obama accepted the Nobel Peace Prize.

On December 30, a Jordanian triple agent Humam Khalil al-Balawi blew himself up in a CIA drone base at Khost, Afghanistan, killing seven CIA agents in the worst attack on the agency in almost 30 years. In a video released shortly afterwards, the bomber appeared with Hakimullah Mehsud, claiming the attack was in revenge for Baitullah Mehsud’s death.

The CIA responded to the Khost bombing with a furious spate of drone attacks, launching 13 reported strikes in the following month and maintaining a similar pace through February and March. Although the 31 strikes launched between January and March killed a number of named militants, one in three reportedly killed civilians.

On May 1 2010, Pakistani-US citizen Faisal Shahzad attempted to blow up a car in Times Square, New York. Intelligence sources quickly linked Shahzad to North Waziristan, making this the first terrorism attempt on US soil of Pakistan’s homegrown Taliban.

The sheer frequency of the bombings brought growing attention to the CIA’s campaign, and in June the UN’s expert on extrajudicial killings, Phillip Alston, called on the CIA to halt the strikes. The drone programme was a ‘strongly asserted but ill-defined licence to kill without accountability’, he said.

On August 23, missiles destroyed the Danda Darpakhel home of Bismullah, reportedly killing 20, of whom 10 were said to be civilians and three were children.

Officials anonymously claimed this strike led to a policy turnaround dictating civilians must not be harmed. Yet the Bureau has identified 25 strikes before the end of the year where the reporting suggests civilians died.

The increasing use of drones led to mounting resentment among civilians in the tribal regions – and tensions increased further in December, when the Islamabad CIA station chief, Jonathan Banks, was forced to leave the country after his cover was blown in a civil law suit brought by drone victim Karim Khan.

But strikes hammered down on Waziristan unabated: in total, 2010 saw an average of one strike every three days, making this by far the most intense year of strikes.

Initially it appeared strikes would continue at 2010’s furious pace – but broader events soon had a pronounced effect on the drone campaign.

In late January, US citizen Raymond Davis was arrested for shooting two men dead in Lahore. Davis was quickly revealed to be a CIA agent, adding a new dimension to the delicate US-Pakistan relationship. Drone strikes abruptly slowed – although they gradually picked up again as the US edged towards persuading Pakistan to release Davis in exchange for payments of $2m to the families of the dead.

Yet the relationship immediately plunged into a fresh crisis: the day after Davis’ release in March, a catastrophic strike hit a gathering of locals who had met to resolve a chromite mining dispute. Over 30 civilians were reportedly killed, including many tribal elders, and more were injured. The strike provoked instant outrage in Pakistan, with the Pakistan army’s chief of staff calling it a ‘senseless attack‘.

The drone strikes stopped for almost a month, and April saw just two strikes – the lowest number since the earliest days of Obama’s presidency.

And the relationship would plunge still lower: on the near-moonless night of May 1, three US helicopters crossed from Afghanistan, pressing far beyond the tribal regions into the Pakistani heartland. The US had tracked its public enemy number 1 to a compound in Abbottabad, 30-odd miles from the capital. Within hours, Osama bin Laden was dead.

Pakistan’s government was furious the US had not alerted it to the raid – while in the US many were outraged that the world’s most-wanted terrorist was sheltering in Pakistan’s suburbia.

But the CIA stepped up bombing, and in June Obama’s counterterrorism adviser, John Brennan, underlined the importance of ‘surgical’ targeted killings such as drone strikes in the US’s strategy for asymmetric wars. Not a single civilian had been killed in a drone strike since August the previous year, he claimed.

The following month the Bureau released data identifying 10 strikes that appeared to show civilians had been killed. The same month, legal charity Reprieve published a series of photos of drone strike victims taken by Noor Behram, a local photographer. The Bureau then released its full dataset, showing that the drone campaign had reportedly killed at least 385 civilians including 168 children.

That autumn, presidential hopeful Imran Khan made opposing drones central to his campaign. In late October, a Khan rally drew a crowd estimated at 100,000, underlining the growing anger at the strikes.

Drones were an increasingly contentious issue in a relationship that was stretched to breaking point. In November, a Nato airstrike killed 24 Pakistani soldiers at a border checkpoint. In retaliation, Pakistan closed the border crossing, cutting a crucial supply route into Afghanistan, and ordered the CIA’s drones out of the Shamsi air base.

Although the CIA could reportedly fly from bases other than Shamsi, amid a fraught atmosphere the strikes stopped: December was the first month of Obama’s presidency to see not a single reported strike on Pakistan’s tribal regions.

The pause endured well into January, amid reports that Pakistan’s government was cold-shouldering US diplomats and refusing to countenance drone strikes. Before the CIA’s first strike of the year, on January 10, vice-president Joe Biden and secretary of state Hillary Clinton reportedly led diplomatic efforts at the very highest levels of government, warning high-ranking Pakistan officials of the plans to strike.

The strikes are not carried out ‘willy-nilly’, he said: ‘I want to make sure that people understand actually drones have not caused a huge number of civilian casualties, for the most part they have been very precise precision strikes against al Qaeda and their affiliates.’ Later in the year, he used a TV interview to lay out ‘five rules’ used to target strikes.

Continuing tension with the Pakistan government caused strikes to pause for much of April – and the month’s only strike was immediately denounced by Pakistan as being ‘in total contravention of international law and established norms of interstate relations’.

Anonymous insiders revealed Obama personally approves the ‘kill list’ of named militant targets in a New York Times investigation into drone targeting policies. The article also claimed the definition of combatant had been dramatically expanded to include all fighting-aged men in the target zone.

Scrutiny of the drones was rising elsewhere, too. In June, Russia and China issued a joint statement to the UN Human Rights Council condemning drone attacks.

Three academic studies examined the casualty-counting work of organisations including the Bureau, and the impact of drones on the civilian population. The constant presence of drones caused suffering and distress, and was hardening anti-American sentiment among those who lived under them, academics found.

Imran Khan provided a rallying point for anti-drone campaigning in Pakistan in October, when he led a high-profile march aiming to reach South Waziristan. Although he was blocked from entering Waziristan, he was accompanied by the world’s media.

Weeks later, the UN announced a special unit to investigate reported civilian casualties. Its two leaders, special rapporteurs Ben Emmerson and Christof Heyns, have each referred to the reported tactic of targeting funerals and rescuers as potentially ‘war crimes’.

Yet the US presidential election came and went with no real debate about the Pakistan drone campaign. Asked about Obama’s use of drones in the foreign policy debate, Mitt Romney said ‘I support that entirely and feel the president was right to up the usage of that policy.’

As Obama prepares to start his second term, the CIA is reportedly engaged in covert drone strikes in Yemen and Somalia, while a PR battle to prepare the public for a similar campaign in Mali has met little scrutiny or resistance. Pakistan has set the template for a form of warfare that’s here to stay.