The Bureau is launching an ambitious new investigation, which will seek to identify as many as possible of those killed in US covert drone strikes in Pakistan, whether civilian or militant.

The Bureau is raising some of the money for this project through a crowd-funding appeal.

Click here to donate to our Naming the Dead project.

As part of our ongoing monitoring and reporting of CIA and Pentagon drone strikes, the Bureau has already recorded the names of hundreds of people killed in Pakistan, Yemen and Somalia.

At the end of January 2013, the Bureau was able to identify by name 213 people killed by drones in Pakistan who were reported to be middle- or senior-ranking militants.

A further 331 civilians have also now been named, 87 of them children.

But this is a small proportion of the minimum 2,629 people who appear to have so far died in CIA drone strikes in Pakistan. The Bureau’s work suggests 475 of them were likely to have been civilians.

‘At the moment we know the names of fewer than 20% of those killed in Pakistan’s tribal areas. At least 2,000 deaths still remain publicly anonymous,’ said Chris Woods, who leads the Bureau’s covert drone war team.

‘Our aim will be to identify by name many hundreds more of those killed. A significant number of those identities will be known by local communities, by US and Pakistani officials, and by militant groups. We hope to convince them to share that information.’

Related story – Analysis: Why we must name all drone attack victims

The project has already secured substantial funding from a UK foundation – but it still needs more funds.

Crowd-funding is an established way of supporting journalism in the US and it is increasingly being used in the UK as a way of funding projects, which established organisations ignore or will not fund.

Using the reach of the web, many people (the crowd) are able to give small amounts of money to back a cause or project in which they believe.

‘In the face of official secrecy, having the full facts about who is killed is essential  for an informed debate about  the effectiveness and ethics of the drone campaign,’  said Christopher Hird, managing editor of the Bureau. ‘And it is exciting to be able to give all of our supporters worldwide the chance to be part of  our first venture in this democratic form of funding.’


A challenging task
Government officials, media organisations and even militant groups are often quick to identify senior militants such as Yahya al-Libi and Ilyas Kashmiri when they are killed.

Yet little is said of the hundreds more alleged militants and civilians among at least 2,629 deaths in Pakistan drone strikes. 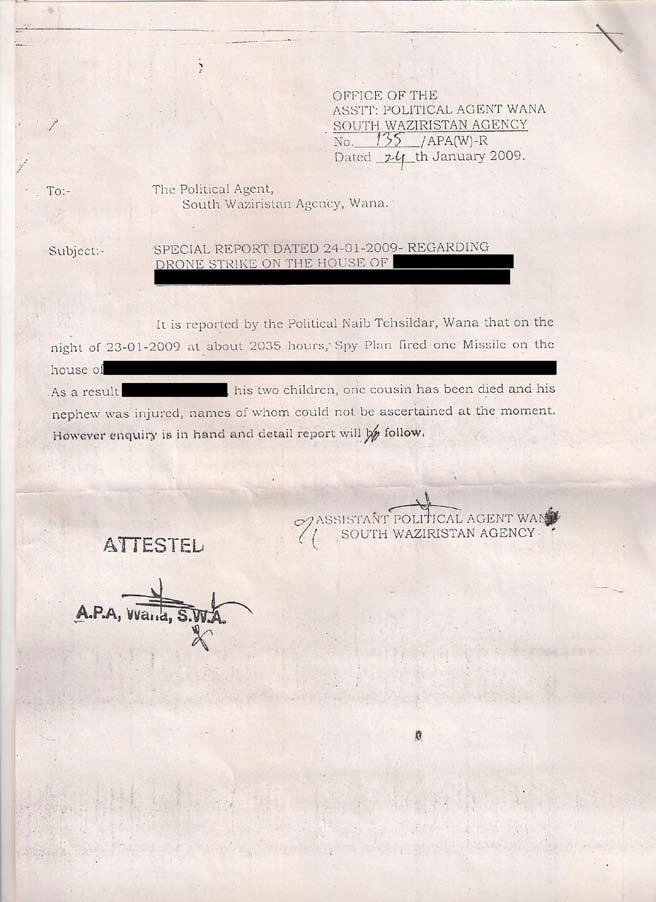 Both the US and Pakistani governments are likely to keep detailed records. A recent case at the Peshawar High Court heard that officials in the tribal agencies had prepared a confidential report which ‘included details of each and every drone attack and the number, names and ages of the people killed’.

Anonymous US intelligence officials have also revealed details of CIA video surveillance on particular strikes. And the ‘Terror Tuesday’ process – in which hundreds of named alleged militants have been selected by US agencies for targeted killing – has been widely reported.

Photographs and other documents also occasionally surface. When a civilian family was killed in the first drone strike of Barack Obama’s presidency, local officials issued formal paperwork (see right) that was later obtained by the campaign group Center for Civilians in Conflict.

ID cards, family photographs and eyewitness testimony of attacks can all provide useful corroborating evidence. The graves of militants killed in drone strikes can also name them as ‘martyrs’ and give details of the strikes in which they died.

Drawing on information from a wide array of sources, the Bureau’s team will seek to build a detailed understanding of those killed.

Focus on Pakistan
While the Bureau will seek to extend the project to Yemen and Somalia in the near future, the initial focus will be on the nation where most US covert drone strikes have taken place.

Researchers based in Pakistan and the UK will seek to build up biographical information for all of those killed, whether civilian or militant – their name, age, gender, tribe, and village, for example. Where possible, photographs, witness statements and official documentation will also be published.

The team will seek assistance from the Pakistan and US governments in identifying those killed. And researchers will also call on Taliban factions and other militant groups to release information on the many hundreds of fighters killed in more than 360 US drone strikes since 2004.

To make a donation to the project click here.