British forces have carried out 299 drone strikes in Afghanistan, defence minister Andrew Robathan announced in Parliament yesterday. This is the first time the British government has announced how many drone strikes it has launched.

The new figures released by the defence minister, which cover 2008 to the end of July 2013, show that the vast majority of armed drone missions in Afghanistan did not lead to a strike. But an analysis of these figures alongside data provided to the Bureau by the US Air Force last year shows that for each mission flown, British forces were significantly more likely to fire potentially deadly missiles than their US allies.

In total, 7% of British drone sorties between 2008 and 2011 resulted in a strike, compared to just over 2% of US missions. The MoD data shows that in 2012 drone missions were even more likely to lead to strikes – 10% of sorties led to missiles being fired, compared to 5% in 2008.

The UK is the only country aside from the US that currently operates General Atomics Reaper drones – last year the MoD announced the fleet was to double in size, from five to 10 armed drones. The US is believed to operate over 200 armed drones in Afghanistan, although it has declined to reveal a precise number.

The new figures, announced by Robathan in response to a parliamentary question from Green MP Caroline Lucas, highlight the key role played by British unmanned aircraft in the Afghan conflict. British-piloted drones carried out 22% of all drone strikes – more than one in five – in the conflict between 2008 and 2011. In 2011, the last year for which comparison was possible, British-piloted drones launched 30% of all drone attacks in the theatre. 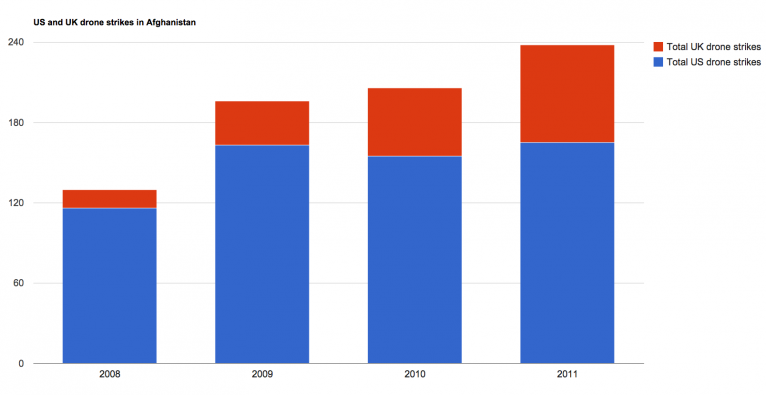 British drone activity then escalated further in 2012: UK pilots carried out 92 strikes in comparison to 73 the previous year and just 14 in 2008. However, there is no full-year data on the number of strikes carried out by the US Air Force in 2012 for comparison.

Last year after months of discussions with the Bureau, the US Air Force agreed to declassify some figures on its drone use in Afghanistan, releasing data for International Security Assistance Force operations (comprising both US and UK pilots) on the number of drone missions flown, the number of strikes it had carried out, and the number of missiles released – one strike can include several missiles. The data showed over 1,000 drone strikes had been carried out in Afghanistan between 2008 and the end of October 2012.

But until now the MoD had refused to reveal how many of these drone strikes had specifically been fired by UK-operated drones.

Get the data: Drone operations in Afghanistan

Part of the reason for the high activity of British pilots in comparison to the size of its fleet is the practice of embedding pilots with US forces. A parliamentary question earlier this year revealed British pilots embedded with US forces have flown over 2,100 drone missions in Afghanistan, Iraq and Libya. This was the first time it had been announced that UK pilots had flown drones in Iraq.

An MoD spokesman told the Bureau in April that even when operating in embeds, British pilots follow UK rules of engagement. Such embeds can last for up to three years; ‘fewer than 10’ pilots are in such embeds at any one time.

One statistic that has not yet been revealed by either the US or UK is casualties – both civilian and suspected insurgent – from drone strikes in the country. The MoD has told the Bureau that it does not collate a ‘comprehensive record’ of casualties ‘because of the immense difficulty and risks that would be involved in collecting robust data’, while the US responded to a recent Freedom of Information request on the subject saying ‘there is no information that can be provided at the unclassified level’.

Robathan also revealed yesterday that British drones are usually under orders to avoid flying over urban areas. In response to a separate question from Caroline Lucas, about the potentially traumatising effect of drones’ presence on civilian populations, he said: ‘UK policy is that, as far is operationally possible, UAS [unmanned aerial systems – or drones] should not fly over built up areas.’