The data below was obtained from the Legal Aid Agency using the Freedom of Information Act.

The data shows, for each procurement area, the number of housing “legal help” cases started by law firms or not-for-profit organisations during 2013/14 and in the first quarter of 2014/15.

Legal help covers advice but not representation and accounts for the biggest share of the legal aid housing budget, which also includes telephone advice and a court duty service and separate legal aid certificates for representation in court.

This allocation is the maximum figure the Legal Aid Agency will pay for without a special application for further cases, and is based on estimated need.

Also given is the number of legal aid contract holders, or “providers” in the area as well as the number of these whose contracts were under notice of termination as at June 2014.

Finally, we have obtained the number of legal aid certificates granted for housing work in each area. Certificated cases cover representation in court and are subject to more stringent merit and means-tested criteria than legal help cases.

Analysis of the data reveals:

*34,817 legal help cases were started in 2013/14 – just 55% of those allocated. This means just over half of the legal advice available was actually used.

*In Warwickshire, Northumberland and Redcar & Cleveland 11% or less of cases allocated were actually started.

*In Bexley and Redcar & Cleveland there were no new legal help cases started during this period.

*There were 38 fewer providers as at June 2014 than at April 2013. Eight further providers were working out their notice.

NB: East Riding, Dorset and Shropshire are shown as having started no legal help cases in either 2013/14 or first quarter 2014/15. This is because these are “outreach contracts” where providers based outside these areas offer advice from a Citizens Advice Bureau in each of the three areas. The providers report the outreach cases as if they come from the procurement area where the provider is based.

For example Dorset is serviced by a Hampshire-based firm. Figures for Dorset cases started are included under the totals for Hampshire.

To see the whole dataset, click the image below: 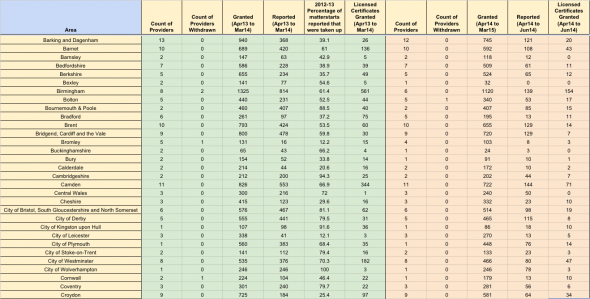