The Liberal Democrats have accumulated more donations in Britain’s most marginal constituencies than any other party, Bureau research reveals.

Nick Clegg’s party has now raised £462,955 in the country’s 20 most marginal seats since the last election, according to Electoral Commission records. This is ahead of Labour on £425,285, and the Tories who have registered £338,558 in donations in the battleground constituencies since May 2010.

The findings are part of a study by the Bureau to examine all cash and non-cash donations to the top 20 swing seats as defined by BBC electoral data. It is a repeat of a previous Bureau analysis in July 2014, which showed the Conservatives had received the most gifts in the marginals and that these finances were being deployed against precarious Lib Dem constituencies.

But the latest research suggests Lib Dem supporters are bankrolling a fightback in the marginals, where their donations have grown to more than £460,000 from around £183,000 last summer. It suggests the party is concentrating its fundraising efforts to try and cling on to existing seats and possibly to try and snatch other constituencies that also hang in the balance: of the top 20 marginals, the Lib Dems won only three in 2010 but came second in six.

The seat which has attracted the most donations for the Lib Dems was Mid Dorset and North Poole. It has raised £172,034 from donors since 2010 when Annette Brooke won the seat by beating her Tory challenger by just 269 votes. Brooke is not standing next month but the party hopes to hold the seat with local Lib Dem councillor Vikki Slade.

Brooke has even helped the party fundraising from her own pocket. She told the Bureau that she regularly donates some of her parliamentary salary to her local party and Electoral Commission records show she has given £25,200 during her five year spell in Westminster.

Next on the list for the Lib Dems was Ashfield in Nottinghamshire where the party hopes to unseat Labour frontbencher and former GMTV presenter Gloria De Piero who won by a slender 192 votes five years ago. While Labour have raised nothing, the Lib Dems have now registered £99,990 in donations there, which includes £21,851 from their own candidate Jason Zadrozny.

However, the Lib Dem campaign was thrown into disarray last month following Zadrozny’s arrest for alleged historical sex offences. He is currently on police bail and he has voluntarily withdrawn himself as a candidate. He also issued a statement saying he “vehemently refute[s] the allegations”. The Lib Dems say he has been suspended as a candidate pending the outcome of the police investigation.

Labour has now raised the second largest pot of funding in the 20 marginals, with donations standing at £425,285, according to the Bureau’s analysis. That represents an almost sixfold growth from just £75,000 last summer.

However, that surge included one particularly large donation. That was in Camborne and Redruth in Cornwall, where Tory minister George Eustice is defending a 66-vote majority over the Lib Dems. Although Labour was a distant third five years ago, the party has received £119,121 for next month’s election – all of it from Fostermco, a company controlled by Labour’s own candidate, Michael Foster.

In his day job Foster is a celebrity agent and his clients include radio star Chris Evans. Electoral Commission records show that Foster’s firm gave a total of £119,121, including non-cash support to Labour in the constituency, providing services such as administration worth £42,727.

Another seat to attract donations from Labour supporters has been Hampstead and Kilburn in north London, where former Oscar-winning actress Glenda Jackson beat the Tories by 42 votes in 2010. Jackson has now retired and the constituency is predicted to be a close contest between her successor Tulip Siddiq and Tory Simon Marcus.

Siddiq, a niece of Bangladesh’s Prime Minister Sheikh Hasina, has attracted £37,500 from donors, while Marcus has raised £56,500. The Lib Dem candidate, Maajid Nawaz, who chairs the counter-extremism Quilliam Foundation think tank, has raised nothing from donors, according to official records.

Although the Conservatives have raised the least in terms of total donations in the 20 marginals, it has received the most in eight of the individual 20 seats. It suggests the Tories are aiming to be a key force in these crucial swing seats. 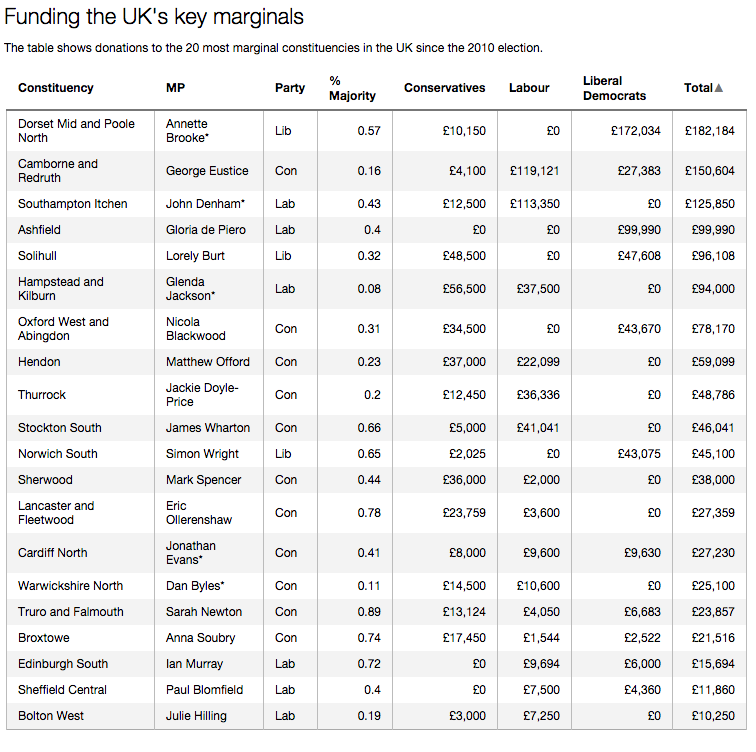 Note: MPs standing down marked with an asterisk.

The Bureau also analysed which funders are putting money into these 20 seats.

The most generous donor by far was Michael Foster’s Fostermco Ltd in Cambourne and Redruth for Labour, followed by the Broadstone & District Liberal Hall Committee in Mid Dorset and North Poole. 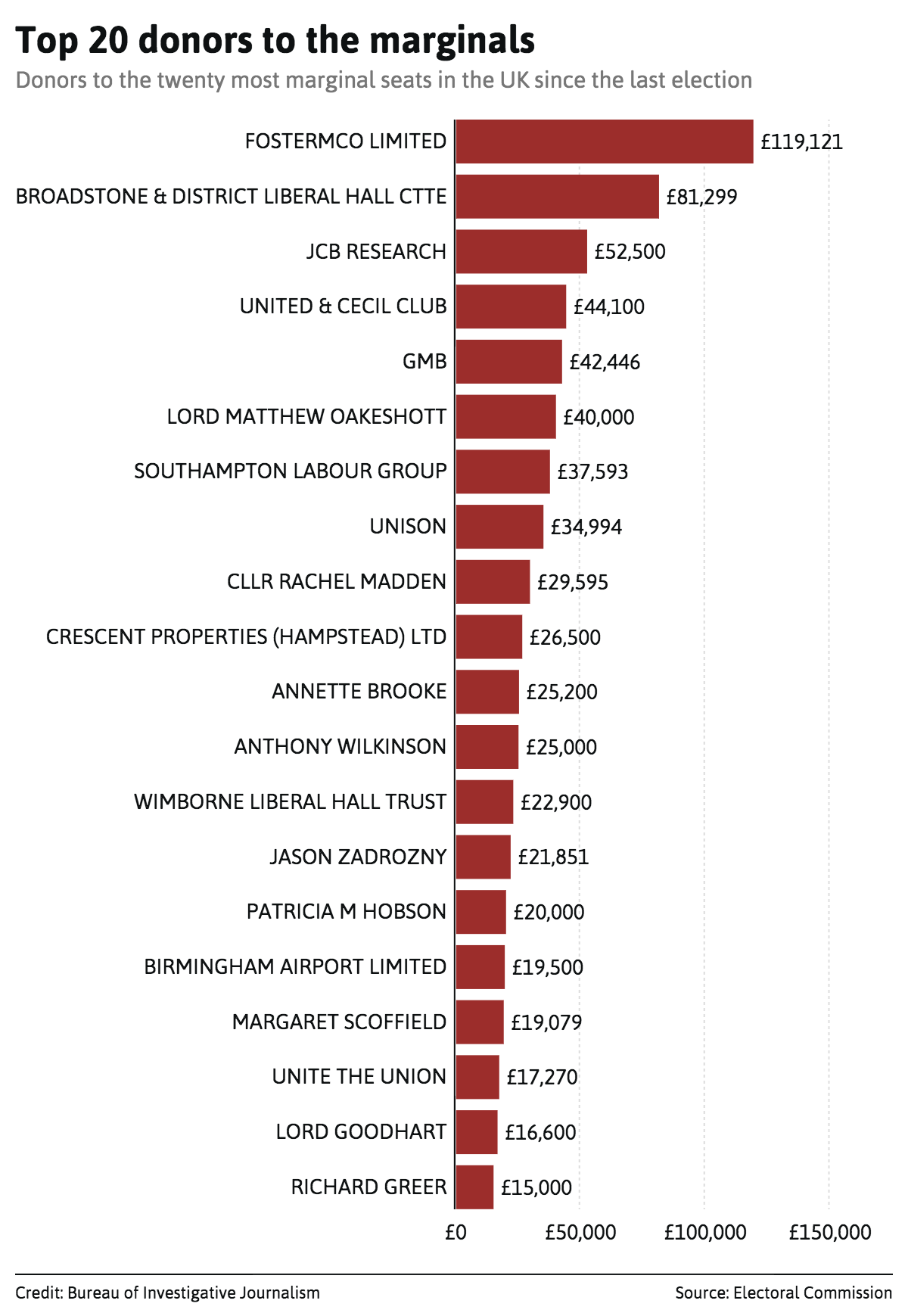 The list also included some of the UK’s best known political funders.

These included JCB Research, which gave £52,500 in total, split between the Conservatives in Sherwood and Solihull. The company, which produces research for the famous JCB plant machinery, is controlled by Tory supporter Lord Anthony Bamford.

Also represented was the United & Cecil Club. The group gave £44,100 to Conservative marginals. Last summer the Bureau revealed that the low-profile members’ club, run from a stables in the Home Counties with a former tobacco lobbyist as its honorary secretary, was a key supporter of Tory marginals.

For Labour, various trade unions gave a total of £121,710 to the 20 marginals. The most generous was the GMB union, which gave £42,446 in cash and non-cash support across various constituencies. Other unions to have donated in the marginals include Unison and Unite.

One individual gave to more than one party. Former Lib Dem peer Lord Oakeshott gave £20,000 to Labour and £20,000 to the Lib Dems. However, this is part of a larger pledge to support left leaning candidates. The ‘non-party social democrat’ pledged £300,000 to Labour constituencies and £300,000 to Lib Dem seats in the run-up to the election.

The gifts to marginals also included a bequest of £19,079 from Margaret Scoffield to the Conservatives in Fleetwood and Lancaster.

Above: Donations to the 20 marginals from the election to July 2014 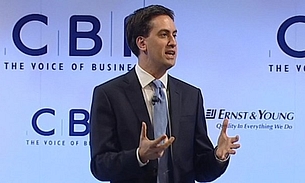 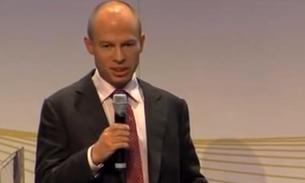 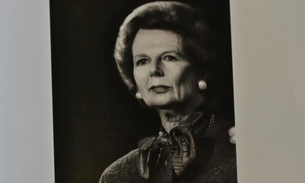