The chances of police or prosecutors taking action against hate crime offenders have plummeted over the last year, new figures show.

Victims of hate crime now have only a one in four chance of seeing a perpetrator charged, cautioned or dealt with in some other way by the police – down from one in three in the previous year, data obtained by the Bureau of Investigative Journalism reveals.

Official explanations for the drop vary, with some forces blaming cuts, and others lack of cooperation from victims.

Campaigners have warned that these poor outcome figures could deter victims from reporting crimes in future.

Rose Simkins, chief executive of Stop Hate UK said: “A regular response from a victim of hate crime is ‘what’s the point in reporting when nothing gets done?’.”

Today the Home Office announced a series of measures aimed at tackling hate crime, including additional guidance for schools and extra funding for security measures at places of worship. In addition to the action plan Home Secretary Amber Rudd will ask Her Majesty’s Inspectorate of Constabulary to assess the way police respond to hate crime.

Using the Freedom of Information Act, the Bureau obtained the figures from 40 out of 43 police forces in England and Wales. Together, these 40 forces serve a population of almost 54 million people.

The total numbers of reported hate crimes have soared by 20% over the past year (from 50,288 to 60,225), with 34 out of the 40 forces recording a rise in offences. But despite this increase, in most of these forces police and prosecutors took action in fewer cases last year than previously.

Just 27% of hate crimes recorded by police resulted in a “positive” outcome such as a charge, summons, caution or restorative justice in 2015/16, compared with 35% the year before, the data showed.

What is hate crime?

In 2014/15, the most recent period for which a breakdown is available, 82% of hate offences recorded were race hate crimes, 11% related to sexual orientation, 6% to religion, 5% to disability and 1% to the victim’s transgender identity. In some cases a single hate offence had more than one motivating factor.

An offence is recorded as a hate crime if the victim or anyone else perceives the suspect to be motivated by hostility or prejudice based on an aspect of the victim’s identity.

The national figures on action against hate crime suspects hide large variations amongst forces, with some showing much larger drops than others.

The graphs below shows 13 of the largest forces, which between them serve 31.6 million people in England and Wales – more than half of the population. All of them saw a rise in recorded hate crime. Ten of the 13 saw a drop in action taken against hate crime suspects. The smaller forces are not shown on the graph because it is difficult to rank them due to discrepancies in their recording systems. 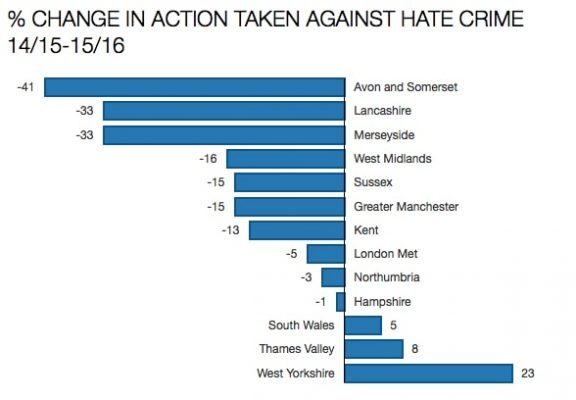 The force which came out worst in the Bureau analysis is Avon and Somerset Police. They cleared up 241 fewer hate crimes in 2015/16 than the year before – a drop of 41% – despite reported hate crime rising over the same period.

The force’s Superintendent, Will White suggested a lack of victim co-operation could be partly responsible for the decline.

“The investigation around this type of crime is victim-orientated and the outcome depends largely on cooperation and assistance from victims,” he said. “We will support victims unequivocally from the point they report a crime and throughout the entire length of the investigation.”

The second worst force is Lancashire Constabulary, where actions fell by a third, while numbers of recorded crimes rose slightly.

Lancashire Constabulary accepted there was a problem: “We are aware that there has been a reduction in our charge and summons rates over the last 12 months,” a spokesperson said, adding that the force was looking to address this by better training for officers on hate crime as well as “joint training with the Crown Prosecution Service.”

Although recorded hate crime went up from 50,000 to 60,000 in a year the number of cases where police action was taken went down by 1,500. This has disappointed campaigners like Simkins.

“We would expect referrals to the CPS to have risen broadly in line with the increased levels of reporting of incidents to the police,” she said.

In fact, official statistics released this month by the CPS also showed that hate crime suspects were less likely to be referred to prosecutors for charging than they were a year ago. The CPS data showed a 10% decrease in police referrals in 2015/16.

A number of possible explanations have been put forward for the decrease in police action against hate crimes: cuts in police budgets, new CPS guidance covering crimes related to social media, and a lack of officer training on how to deal with hate crime.

The Police Federation put the blame squarely on cuts. The spokesman on hate crime, Simon Kempton, said: “Since 2010 we have lost 17,000 officers and 19,000 police staff, yet the number of crimes being reported and recorded is going up, including hate crimes.”

They warn that with increased pressure to investigate other priorities such as child sexual exploitation and cybercrime, as well as the high level of terror threat, “We’ve reached the point where we have to stop doing some things.”

CPS guidance on prosecuting online abuse was issued in summer 2013 amid fears police forces were being overwhelmed by complaints involving social media. Officers were advised to draw a distinction between offensive messages that are not criminal and those that could meet the threshold for prosecution as they are “grossly offensive”, credible threats of violence, or are part of a campaign of abuse.

A spokesman for TellMama, which records anti-Muslim incidents, said: “We did notice the effect of the guidance. Cases which would previously have been referred for charging under the Malicious Communications Act are now being dropped.”

The National Police Chiefs Council refused to comment on the drop in police action on hate crime until national figures are officially released.

CASE STUDY: ‘It’s banging on the walls late at night, it’s imitating him, it’s calling him names like retard and spaz’

Jackie is a single mother. For the past two years the family has been subjected to what she believes is disability hate crime directed at her young son, Harry, who has severe autism.

Managing Harry is not easy – “he doesn’t speak, he screams,” she said. When out and about she has to keep her son (who is not a toddler) on reins to stop him running into the road, which she says attracts hostile comments from members of the public “asking why I keep my child tied up”.

She lives in Lancashire, which saw an increase in the numbers of hate crimes reported last year, but a drop in the number dealt with by the police over the same period.

Since moving into a new home – a housing association property in the Lancashire borough of Rossendale – Jackie says a neighbour’s teenage son and his friends have targeted Harry for verbal abuse.

“It’s banging on the walls late at night, it’s imitating him, it’s calling him names like retard and spaz. They put a vacuum hose out of the window and called through it, mimicking him,” she told the Bureau.

After an initial complaint to the police the verbal abuse stopped for a while but was replaced by loud music played through the small hours.

“They like to get a reaction, so they turned it up and down during the night, depending on whether they had succeeded in waking Harry up and he had started screaming. It was terrible, none of us had any sleep.”

“They set fire to wheelie bins against our outside wall,” Jackie said. “It’s exhausting. I barely leave the house any more. I’m too tired to go out. People don’t understand how hard it can be with a child like Harry.”

“When he doesn’t get enough sleep he becomes very unmanageable. He has violent outbursts and bouts of self-harm. It means the other children don’t get my attention. I’ve had to involve social care purely because of the issues [with the neighbour].”

Jackie is a Muslim who wears a hijab, for which she says she also regularly receives verbal abuse. But she does not report this for fear she will be taken less seriously.

“I’ve been advised by a police officer that if I report too many things they’ll just think, ‘It’s her again’, and I’ll be labelled as a complainer,” she said.

Rossendale police have responded to calls about the abuse of her son – albeit with delays – but she has been told the perpetrator will not be prosecuted, as he is under 16.

“The PCSO [community police officer] mentioned cameras to record the abuse but nothing was done about them.”

Instead, the police are now recommending mediation and have suggested it is for the housing association to deal with their tenant, she said.

“But the housing association said they couldn’t control what tenants do in their own home.”

“They told me I would hear back from mediation last week and still nothing. It amazes me how they think I have time for mediation yet I don’t even have time to use a bathroom alone.”

Lancashire Constabulary is amongst the worst performing forces on hate crime with a 20% “positive outcome” rate in 2015/16, a fall of 12% on the year before.

Overall just 413 hate crimes reported to the force in 2015/16 resulted in an outcome such as charge or summons, compared with 617 the year before.

A spokesman for the force said it was aware of Jackie’s complaint, which was “being addressed by the local neighbourhood policing team and partners”.

He added: “We are aware that there has been a reduction in our charge and summons rates over the last 12 months and we have looked to increase this with joint training with the CPS and awareness with officers.”

This is of little comfort to Jackie and her children.

Names have been changed to protect the identities of the individuals concerned.