Police commander Kudai Rahm Shakir only had six men with him when the Taliban started firing at his post in Afghanistan’s Helmand province. The phones weren’t working, so he couldn’t call for help. In the ensuing shoot-out, which lasted through the night, all but one of his colleagues were killed. A bullet went through Shakir’s jaw, shredding his tongue. The unit’s machine gun was destroyed. As the enemy got nearer and nearer, Shakir resorted to lobbing grenades to stave them off. What he couldn’t do was run away – he didn’t have any legs.

Shakir is one of several Afghan police officers identified by the Bureau who are holding the line in America’s longest war without recourse to all their limbs. He lost his legs a year ago in an IED explosion. Fifteen days later, he was back on the frontline.

“If I go and sit in my house Taliban will go to my house and kill me,” he explains, speaking indistinctly through his shattered jaw. “This is the only way for me to protect myself and survive.”

The US has sent more than $70 billion to the Afghan security forces since 2002, funding that is supposed to have created a capable fighting force. Around $3.5 billion was budgeted for 2017. But endemic corruption and mismanagement means that money is often diverted away from where it is needed.

In many towns and villages, the end product of America’s vast spending is a rag-tag force of the desperate, the opportunistic, and in some cases, the limbless.

Pir Mohammed Pamir is in a Helmand police unit a little further north from Shakir’s. He lost his leg three years ago in an IED, but says he can drive his Humvee - “no problem”.

He works in the Afghan national police’s anti-narcotics division, but was recently roped in to helping defend the area from a Taliban offensive while colleagues waited for reinforcements. “The police force is not sufficient for the big district we’re guarding”, he explains.

When he drives out to the checkpoints ringing the area, the Taliban are only about 1km away, and sometimes shoot at him.

“There are people who are in worse condition than I am,” he shrugs. “I still have one leg.”

Sayed Daoud Saddat works in another part of Helmand for the Afghan Local Police – a community defence force run by the Ministry of Interior. He lost both his legs in an IED explosion two years ago. He says he had no option but to carry on working for the local defence unit.

“There are people who are in worse condition than I am. I still have one leg.”

“A proper human being who has both legs and arms cannot find a job, so forget about a person who's lost his legs finding a job,” he explains.

Sardar Mohammed (pictured above on the bonnet of his Humvee) is a more senior police officer in Nad Ali district. He lost both his legs in a booby trap in Sangin two years previously.

Like the others, he is gruffly pragmatic about his condition, pointing out that because one leg was amputated below the knee he can still drive. He fights from his Humvee.

After his injury, the government offered to keep paying him his salary even if he stayed at home. But he felt he was safer on the front line. “The Taliban are desperately looking for people who are sitting at home with no weapons and no protection,” he explains.

He also worried what would happen to his unit if he didn’t return.  “Most of my men would have abandoned the fight,” he says.

Sardar Mohammed, like most of the men, was given basic prosthetic legs by the International Committee of the Red Cross. But he needs better ones for the active lifestyle he's trying to lead.

"I want to get proper legs, and be able to do my job properly," he says.

Sadiq Sadiqi, an Afghan government spokesman, told the Bureau it was "a challenge" to reach out to all wounded soldiers but they would be "taken care of." He said any soldiers that lost limbs should have been reassigned to administrative positions.

"At this stage we have not been told of someone back on the frontline with a condition like that," he said, adding that if any amputees were still fighting then it was "a mistake... a breach of the policy".

But Sardar Mohammed says he knows of “lots” of colleagues who have lost limbs. “Some are sitting at home and receiving their salary at home, some are like me still involved in the fighting,” he says.

Money flowing away from the frontline

It is hard to get a sense of the total number of amputees involved in some form of combat. Afghan security force casualties rose steeply after the US withdrew most of its troops in 2014. At the beginning of 2017 they were getting killed at a rate of more than 100 a week, according to the Special Inspector General for Afghanistan Reconstruction (SIGAR), the US watchdog.

Help for Afghan Heroes, a charity in Kabul that helps wounded Afghan security forces, says it is aware of about 20 soldiers who went back to active duty after losing limbs, mostly in administrative roles. In contested provinces like Helmand however, back office roles can quickly turn in to combat ones. Moreover, people in the provinces are unlikely to know about the Help for Afghan Heroes’ existence, meaning there could be many more unrecorded cases.

“I know a lot of other people lost body parts,” says Pir Mohammed Pamir. “In my unit there's another guy who lost his leg. He can walk for a little bit but not too long.”

The involvement of amputees in combat partly reflects the men’s toughness and commitment to the fight, as well as how few other options there are for men marked as pro-government in places where the Taliban are strong like Helmand.

But it also typifies the contempt with which the US-backed Afghan security system treats its footsoldiers. Supplies are corruptly diverted on a regular basis. Positions are left undermanned because commanders claim salaries for more soldiers than they actually hire. Helmand's police chief was quoted as saying last year that up to half the 26,000 security force personnel assigned to the province were positions that didn't exist in reality - so-called ‘ghost soldiers’ who were on the payroll but not on the frontline.

“I know a lot of other people who lost body parts. In my unit there's another guy who lost his leg"

The Taliban seized several districts from the government in 2016, reducing the Afghan government’s control of the country to about 60% of its administrative areas. The Trump administration is reported to be conducting a major review of the US’s Afghan policy.

However any increase in troops is likely to be limited, meaning that Afghan security forces will remain the key to containing the Taliban for the foreseeable future. Some parts of the Afghan security forces - such as the Special Forces - are seen as capable, if over-stretched. But the fact that they are allowing men without legs to conduct the defence of parts of Helmand suggests major reforms are needed.

Kudai Rahm Shakir, the survivor of the shoot-out, lost both his legs above the knee. Four bullets have torn through his body in the last five years – the last one has left his face twisted in to a kind of permanent grimace.

The Afghan government offered to give him a ticket to India for treatment and some money to spend on it, he says. But he quickly found out it wouldn’t be enough to even mend his jaw.

The father of nine can walk small distances with crutches, but mainly fights from his Humvee – he has rigged up a mechanism allowing him to operate the pedals with his hand. 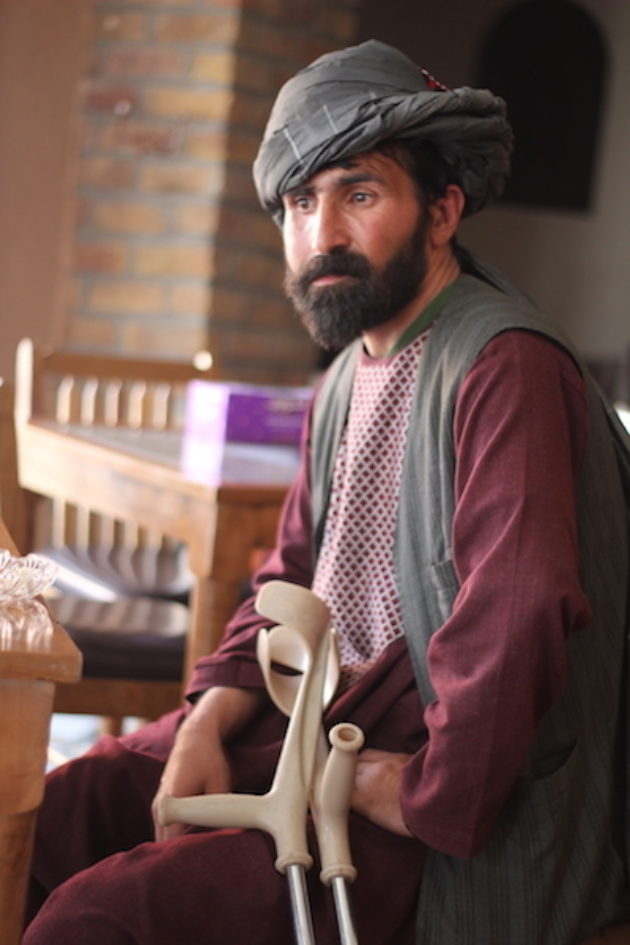 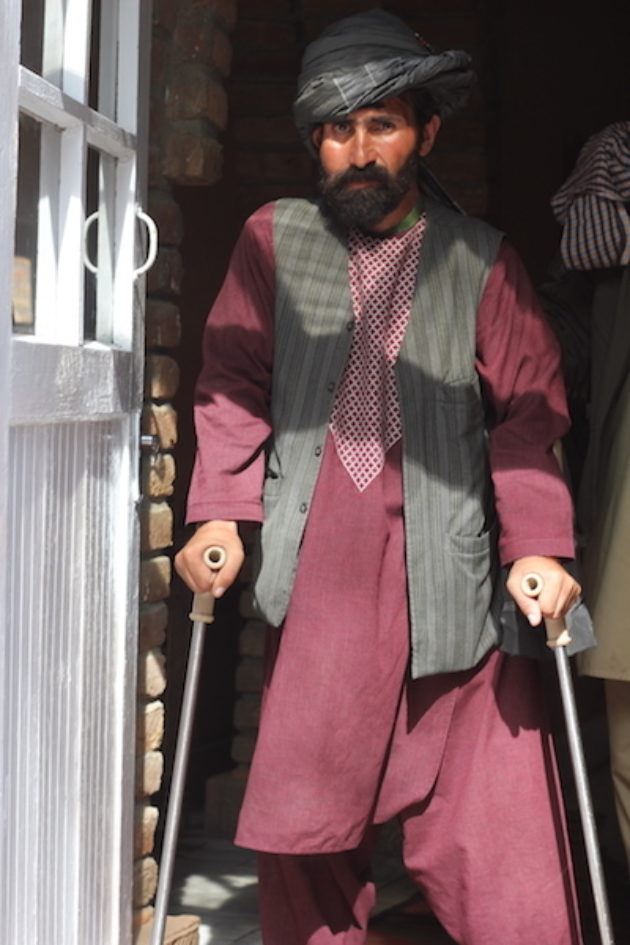 He is stoical about his injuries, but infuriated at what he says is the indifference of people higher up the chain of command to the needs of those in the firing line.

“They make money out of them”, he says simply.

His commanders have urged him to hold the line without giving him proper assistance, he says.

“I should have got support from police headquarters. The job of the commander is to protect his soldiers and assist his soldiers in this sort of situation,” he says. "They don't help us."

“I am like this”, he says, gesturing at his wounded body. “[And] the commander is sitting behind his desk giving me orders not to retreat.”

Morale is so low that around a third of Afghanistan’s security forces fail to re-enlist each year.

Zabihullah Wardak, an anti-corruption campaigner in Kabul, says that his network receives a lot of complaints about frontline conditions in Helmand, mainly about the supply of food and ammunition.

“I’m more concerned that the Afghan state will collapse from corruption than from the Taliban”, he says.

The US and Afghan governments have taken steps towards addressing the problem. Last year, President Ashraf Ghani introduced a new criminal justice centre with a mandate to tackle corruption at the highest levels of government. The US is implementing a biometric registration system to tackle the ghost soldier problem, which is said to have improved a little in Helmand since last year.

But the scale of the challenge is huge. Corruption is deeply embedded in every aspect of governance in Afghanistan, exacerbated by the vast amounts of foreign money that have poured in to the country since 2001.

One US official told the Bureau he fears that when it comes to creating a viable Afghan security force, the US and its allies “may have bitten off more than they can chew.”

The uphill struggle of the reform project is encapsulated by a recent story from Helmand – a general appointed by President Ghani with the explicit mandate of cleaning up corruption was himself charged with corruption.

For Khudi Rahm Shakir, there is no end to the war in sight.

“There is no profit in bringing peace” he explains. “This war will continue.”

As he compares his likely future with the one he desires, a tear suddenly rolls down Shakir’s disfigured cheek.

“I just basically want to live peacefully in my own house, with my kids.”

If you're interested in knowing more about this story and the situation of legless fighters like Kudai Rahm Shakir and Sardar Mohammed, contact Bureau reporter Abigail Fielding-Smith on [email protected]