The Ecologist. Read the story.
Find out how to use the Bureau’s work

Many of the world's leading drug manufacturers fail to disclose how much antibiotic discharge they release from factories, according to a new report from a drug industry watchdog. Such discharge risks creating more superbugs.

The report surveyed household-name pharmaceutical giants like GSK, Novartis and Roche as well as generic companies which make non-branded products for the NHS and other health systems.

None of the 18 companies polled would reveal how much antibiotic discharge they release into the environment, according to the independent report from the not-for-profit body, the Access to Medicine Foundation. Only eight said they set limits for how much could be released in wastewater.

Only one disclosed the name of its suppliers – a move which is seen as important as it would make companies accountable for their environmental practices.

Commenting on the report, Dr Mark Holmes, a veterinary scientist at the University of Cambridge, said: “Antibiotic resistance is complex but if we are to deal with this challenge every sector must do their bit. The pharmaceutical industry has been a key player in improving public health but a failure to address environmental impacts of antibiotic pollution could undo much of their good work.”

Changing Markets, an NGO which has campaigned on the issue of pharmaceutical waste, added: “Pharmaceutical companies have a clear responsibility to tackle pollution in their supply chains, not least because of the considerable human health impacts associated with untreated waste from pharma manufacturing, prime among the creation of drug-resistant bacteria. From our own research in India and China, where most of the world’s generic drugs are made, we know this is an ongoing problem and that very little progress is happening on the ground.

“As the report also highlights, there is a crying lack of transparency about pharmaceutical supply chains which means that we know practically nothing about where our drugs are made. This is a scandal and pharmaceutical companies will face increasing calls to do something about it.”

Click here to support us
"There is a crying lack of transparency about pharmaceutical supply chains which means that we know practically nothing about where our drugs are made. This is a scandal."

Antibiotic waste from pharmaceutical manufacturing leaking into the environment is a neglected driver of antimicrobial resistance - or AMR - according to a global report published in 2016 by ex-finance minister Lord Jim O’Neill. This is because residues of antibiotics in the environment expose bacteria to levels of the drugs that fuel the emergence of resistance. The ‘superbugs’ that form as a result can spread all over the world. To tackle the problem, Lord O’Neill called for regulators to set minimum standards around the release of waste and for manufacturers to drive higher standards through their supply chains.

AMR has been described as one of the greatest health problems facing the world. Without effective antibiotics, infections become more difficult to treat and common medical procedures like joint replacements, C sections and chemotherapy care for cancer – which rely on the drugs to kill infection – could become too risky to carry out.

Last year the Bureau of Investigative Journalism reported on a study which revealed ‘excessively high’ levels of antimicrobial drugs - as well as superbugs - in waste water from a major drug production hub in the Indian city of Hyderabad. The quantities found were strong enough to treat patients, scientists said. This followed an earlier report by the i and the Bureau of resistant bacteria in the wastewater of a factory there which supplies the NHS with antibiotics. 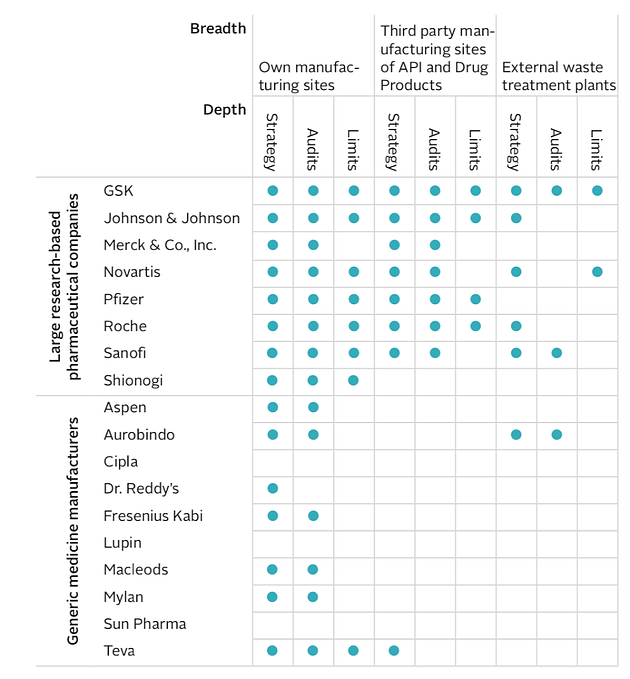 Table shows which pharmaceutical companies have a strategy to minimise the environmental impact of antibiotic discharge from manufacturing; whether they audit their own plants, third party suppliers or external waste treatment plants which they use to dispose of their waste; and whether they set limits for the amount of antibiotic discharge is released into wastewater (either at their own plants or across external suppliers and external waste treatment plants). It shows only eight companies have set limits for antibiotic discharge, and in the majority of cases these do not apply across their entire supply chains. Antimicrobial Resistance Benchmark Report 2018 by the Access to Medicines Foundation

The Antimicrobial Resistant Benchmark 2018 report - released today at the World Economic Forum conference in DAVOS - evaluated how a cross-section of the pharmaceutical industry are responding to the threat of AMR.

It found none disclosed their actual discharge levels – information the authors said is ‘valuable and vital’ as it could allow governments and researchers to understand the relationship between discharge and the development of superbugs.

Three generic drug companies - Cipla, Lupin and Sun Pharma – did not show any evidence of a strategy to minimise the impact of their antibiotic manufacturing on the environment, the report found, although Cipla promised to develop one this year.

Of particular concern were external companies that work for the main drug companies. Third-party companies manufacture and supply most drug firms with the key components of antibiotics, known as active pharmaceutical ingredients (APIs); and external waste treatment plants, which many drug companies use to process their discharge from antibiotic manufacturing. Some companies have on-site wastewater-treatment.

Only eight companies set discharge limits for antibiotic waste, and for half the companies these limits only apply to their own sites, rather than their suppliers’ too. Only two companies  – GSK and Novartis – require their external waste treatment plants to follow their limits. Sanofi and Roche, for example, do not monitor the discharge made by their external waste treatment plants, the report notes.

The Medicines Company was the only one willing to identify its third-party manufacturers, a move the report said would enable governments and researchers to assess the impact of individual manufacturers on antibiotic resistance. The report notes that pharmaceutical companies that sell antibiotics “may be able to exert considerable influence over the environmental risk management of their suppliers.”

Access to Medicine is an Amsterdam-based NGO that receives funding from the UK Government, the Bill & Melinda Gates Foundation and the Dutch Ministry of Foreign Affairs.

Photo of pharmaceutical waste in Hyderabad, India by Christian Baars

The world's hunger for meat is accelerating the rise of superbugs