Sleeping shopkeepers caught in the crossfire. Three school guards beheaded by armed men. The only Sikh candidate due to stand in coming parliamentary elections blown up in a suicide attack. This is a month in Nangarhar, a once relatively quiet province in eastern Afghanistan.

These incidents are just a fraction of the bloodshed this year in Nangarhar, a province which few people outside of Afghanistan have heard of, but which has, under the radar, become one of the most dangerous for civilians outside of Kabul.

The more infamous insurgency hotspots, Kandarhar and Helmand, were partially subdued at the cost of scores of US and UK troops between 2009-2010. But even the limited gains in security created by the US surge proved hard to sustain. As US troops withdrew and Afghan forces concentrated their resources on population centres, abandoning swathes of the countryside (according to information leaked to the New York Times over the weekend, this is now a central plan in the Trump administration's Afghan strategy), Nangarhar's problems grew more acute. The fact that it is now slipping towards the levels of chaos and conflict once seen in Helmand underscores the ineffectivesness of the US's 17 year long attempt to stabilise Afghanistan militarily.

For the residents of Nangarhar, this ineffectiveness has been costly. The country’s franchise of Islamic State (known as IS-K) has managed to gain a foothold in the province when it had failed elsewhere, exploiting the disarray of government forces and the fragmentation of the local insurgency. Latest figures from the UN mission in Afghanistan show civilian casualties in Nangarhar doubled in the first six months of this year, compared to the same period the year before. The vast majority of these have been caused by roadside bombs and suicide attacks, most of which have been claimed by IS-K. But this is also the province where most search operations have turned deadly and it is home to the district with one of the highest civilian casualty rates from US strikes.

The mineral-rich Nangarhar province, whose mountains reach across the Pakistan border, had remained comparatively unaffected by the war waging in other provinces. But the departure of US troops began its fray into chaos, and when IS-K was able to capture several districts in Nangarhar in mid-2015 soon after it emerged publicly, the descent continued. The Afghan government has limited presence on the ground to gain intelligence and the US even less.

Fardaws Khan knows this well. It was the dead of night when government forces attacked his house in the village of Lal Pur last September. While some of the details remain hazy, Fardaws says that by the time morning came, his wife, 12-year-old daughter and 13-year-old son had been shot dead. Fardaws himself has been left with life changing injuries, as a wound has exposed part of his intestines.

“We were in agony at that moment. We could not move, we were lying down and bleeding,” Fardaws told the Bureau. “I used to be a farmer but now I can’t do anything.”

Documents from local government officials in Nangarhar confirm that civilians were killed by Afghan forces in the raid. But mention of responsibility fades out of the paperwork as it goes up the chain of command, leaving Fardaws struggling to get any kind of compensation, seemingly stuck in a bureaucratic battle with various arms of the Afghan government. “The government has not helped a penny although it admits that I am a victim and that it killed my family members for no reason,” he says.

There have been a number of reports of Afghan night-time raids causing civilian casualties in Nangahar in recent months. One particular incident caught the headlines - Afghan forces had killed relatives of Fazal Hadi Muslimyar, the Afghan Senate Chairman, a prominent politician with clout in Kabul. The incident is a clear example of the complexity of operations in such areas. One resident told the Bureau that an Afghan police official in the village had rushed to the aid of a Taliban commander, who was a relative, supposedly believing he was under attack from IS-K forces (IS-K and the Taliban have frequently clashed in Nangarhar). Both the Taliban commander and the police chief were also said to be cousins of the Senate Chairman.

The building number of civilian casualties from raids in Nangarhar is likely, in part, to be a symptom of the intensity of the battle waged by US and Afghan troops against IS-K. A barrage of strikes has rained down on the province since US commanders were given the targeting authority to hit the group in January 2016, the air force even deploying the largest non-nuclear bomb it has ever used in combat, known as the MOAB, against a tunnel complex where IS-K fighters had established a base. Now their offensive has moved into what they hope will be its final phase, with the US military announcing joint forces had captured the group’s local capital in July. 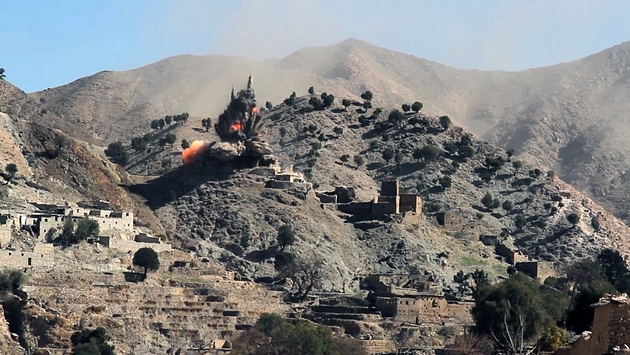 It is unclear how successful this latest attempt will be. The US military vowed to defeat IS-K by the end of 2017, but constant strikes have struggled to stem IS-K attacks with the group now claiming deadly bombings all the way in the Afghan capital of Kabul. Meanwhile in Nangarhar, their presence is terrorising much of the local population. Over 80 girls’ schools shut their doors last month, in response to a threat from Islamic State. In one particularly brutal attack, armed fighters suspected of belonging to Islamic State beheaded three school guards and set part of the building on fire.

“As part of the war strategy the US even used the ‘mother of all bombs’ [MOAB] in Nangarhar last year, but it did not result in the slightest reduction of violence,” says Fazal Muzhary, a researcher with Afghanistan Analysts Network. “Instead the violence in Afghanistan, and particularly in eastern Nangarhar, has increased.”

As part of the war strategy the US even used the ‘mother of all bombs’ [MOAB] in Nangarhar last year, but it did not result in the slightest reduction of violence

And for many, Nangarhar’s descent speaks to a much wider issue, one that extends beyond IS-K. “The declining security environment in Nangarhar merely underscores the deep contradictions in US strategy in Afghanistan, and the unwinnable nature of the war,” says Stephen Walt, Professor of International Affairs at the US-based Harvard Kennedy School.

Michael Kugelman, a specialist on Afghanistan and deputy director of the US-based Wilson Centre’s Asia program, agrees that the situation in Nangarhar says much about the US’s strategy in Afghanistan. “I have faulted the US for its reductive and incomplete strategy in Afghanistan...Nangarhar is a sobering example of blowback from that unidimensional and overly securitised strategy,” he told the Bureau.

“If you would have asked a US military officer 15 years ago whether they would expect the US' largest non-nuclear asset to be dropped in Nangarhar, at that point, they would have been surprised,” says Kugelman.

But, he adds, Nangarhar is not unique, “You can pick a variety of examples from Nangarhar to far beyond the other side of the country that used to be peaceful places. You could use many examples to say: After 17 years of fighting, after billions of dollars spent, after many lives lost, what do we have?”

“A country in a very precarious state,” Kugelman concludes.