The number of US strikes in Afghanistan rose drastically in August, with official military data showing that US forces carried out more than 800 strikes compared with 537 the month before.

This appears to be the highest number of strikes in a single month ever recorded by the Bureau at 810. It is, however, difficult to draw firm conclusion on patterns in the air war because of gaps in our data caused by a year-long information blackout from the US military. The Bureau thus only has official figures for the past year and from July 2016-September 2017.

The rising number of strikes is probably linked to US efforts to put pressure on the Taliban as both sides negotiated a possible peace deal.

Peace talks broke down over the weekend, with President Trump announcing the cancellation of a secret meeting planned at Camp David. Shortly afterwards, John Bolton, the president’s hawkish national security advisor who was opposed to the meeting, was ousted. 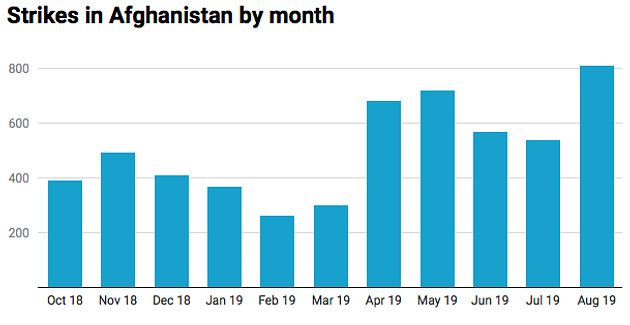 How President Trump will proceed in Afghanistan remains to be seen, with concerns raised that he may look to intensify the air war in the country after the failure of the talks.

"US airstrikes are already a leading cause of civilian deaths in Afghanistan — particularly among children. President Trump’s abrupt announcement cancelling the talks and his vow to hit the Taliban hard raises serious concerns about a further escalation in airstrikes, at a time when the civilian casualties are at record highs," Patricia Gossman, senior Afghanistan researcher for Human Rights Watch, told the Bureau.

How the president plays this one may depend greatly on who replaces Bolton, with a candidate announcement expected next week. However, many experts seem to agree on one thing: the bloodshed will get worse.