An independent inquiry has been launched into the European Union’s response to the coronavirus outbreak, after the Bureau revealed the confusion, complacency and lack of coordination that plunged the continent into crisis.

Emily O’Reilly, the EU Ombudsman who holds European institutions and agencies to account, has asked for evidence from Andrea Ammon, the director of the European Centre for Disease Prevention and Control (ECDC). The documents she has requested could shine a light on the cooperation between the ECDC, WHO and Chinese CDC and reveal what the agency knew about member states’ preparedness during the early stages of the crisis.

In another letter sent this morning to Ursula von der Leyen, president of the European Commission, O’Reilly asked about the transparency of European procurement schemes and appointments to scientific advisory panels.

O’Reilly told the Bureau it was her responsibility “to make sure that the institutions in the front line of dealing with Covid-19 are maintaining the highest transparency and accountability standards, not despite the crisis, but precisely because of the crisis. Public trust in EU institutions – and the decisions they take – is more important than ever.”

By mid-March, Europe had become the epicenter of the coronavirus pandemic. To find out what went wrong, the Bureau – in collaboration with news outlets across Europe, including the Guardian, Süddeutsche Zeitung and El Mundo – reviewed meeting records and interviewed the EU officials and experts involved in the response.

Crisis at the commission: inside Europe's response to the coronavirus outbreak

At the height of the crisis the European commission’s scheme to find personal protective equipment (PPE) failed to deliver any masks to member states. The shortage was compounded by the fact that the commission had sent 56 tonnes of PPE to China in February. Many member states’ emergency stockpiles had dwindled over recent years. The crisis shook the foundations of European solidarity; at one point lorries carrying PPE to other European countries were stopped at the borders.

Experts also highlighted testing guidelines set by the ECDC and WHO that severely restricted attempts to stop the spread of the virus within Europe. The ECDC told the Bureau that such guidelines were a reflection of their understanding at the time.

O’Reilly will also examine the ECDC’s capacity to gather information about the virus. She told the Bureau: “As the pandemic is far from over, this assessment could serve as a point of reference as we continue to deal with the effects of this virus.”

Stella Kyriakides, the European health commissioner, has also suggested that she plans to review what went wrong within Europe. Speaking at a press conference the day after the Bureau’s story was published, she stressed the need “to start the reflection on what we have learnt and what needs to be handled better, differently, in the future”.

This article is part of our Global Health project, which has a number of funders including the Bill and Melinda Gates Foundation. None of our funders have any influence over the Bureau’s editorial decisions or output. 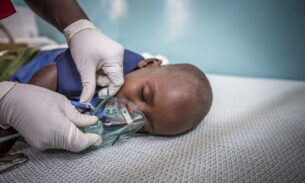 Lack of oxygen leaves patients in Africa gasping for air