Rupert Murdoch’s media businesses entertained David Cameron’s closest advisers more than any other organisation according to the latest data accessed by the Bureau of Investigative Journalism.

This investigation, coming at the same time News International is the centre of world-wide media attention, reveals how close the relationship of the Conservative party with Mr Murdoch’s companies is.

Almost a quarter of all lunches, dinners and hospitality enjoyed by 10 Downing Street’s senior political staff in the first seven months of the Coalition government came from News Corporation and News International, an analysis of the register of special advisers’ gifts and hospitality shows.

Rupert Murdoch’s executives and journalists hosted 26 of the 111 events on the register, amounting to 23 per cent of all entertainment.

Andy Coulson, who at the time was David Cameron’s director of communications, was entertained by News International on five occasions, including lunches with representatives of the Times, the Sun, Sky News and the Wall Street Journal. This was when the former News of the World editor was under scrutiny over allegations of phone-hacking. Coulson resigned from his government role in January 2011.

On December 15 2010, he was a guest of the Sun at an awards dinner. Two days later it was revealed that News International had paid his legal fees in the Tommy Sheridan perjury trial.

During the time covered by the register, the government was deciding whether to raise the BBC’s licence fee, something News International strongly opposed. It was also weighing up whether to allow NewsCorp’s proposed £10bn takeover of BSkyB.

In October 2010, the Coalition announced the licence fee would be frozen for six years, forcing the corporation to make deep spending cuts.

Gabby Bertin, Cameron’s official spokeswoman, was wined and dined by News International nine times, including a trip to last year’s Wimbledon. She was also entertained by News Corporation, the parent company of News International, just one month before the licence fee settlement was finalised.

Labour MP Paul Farrelly, a member of the Culture, Media and Sport Select Committee, said: ‘After the phone hacking scandal we know how deeply News International penetrated Downing Street and the Metropolitan Police.

‘These statistics reinforce concerns that News International’s tentacles were everywhere just at the time when Rupert Murdoch was trying to clinch the biggest deal of his life.

‘It was always on Murdoch’s agenda to cut the BBC down and we can only suspect Murdoch and his advisers used these sport and entertainment junkets as an opportunity to outline his agenda in this area.’

But a senior executive at NewsCorp suggested it was highly unlikely Downing Street staff met anyone working on the BSkyB bid.

The Coalition is the first administration to publish details of gifts and hospitality received by special advisers, as part of its ‘transparency initiative’.

The media-focused nature of many special adviser roles mean that extensive contact with journalists and media executives is inevitable, and 83 of the 111 events were hosted by TV companies and newspapers. The register does not show whether advisers were entertained by journalists or executives.

The Bureau approached the Cabinet Office, which handles the register, asking for more details of the hospitality. A spokesman said: “This Government has published all the information that we have promised to publish – which is more than any previous Government.”

News Corporation and 10 Downing Street declined to comment. But a NewsCorp executive suggested that while the scale of hospitality seemed large, it was important to realise News International at the time owned four UK titles and so employed many journalists. The executive added it was not surprising News International features so heavily in the register.

However, the extent of News International’s contact with Downing Street special advisers appears disproportionate to its news outlets’ reach. A recent Ofcom report on the UK media landscape showed that Sky news reached 11.7 million viewers compared to the BBC’s 33.5 million.

Separately, the Bureau has discovered that Andy Coulson arranged for Alexander Kutner, the son of Sky News anchor Kay Burley, to get access to prime minister’s questions. He received a bottle of wine in thanks. Sky News is owned by BSkyB. 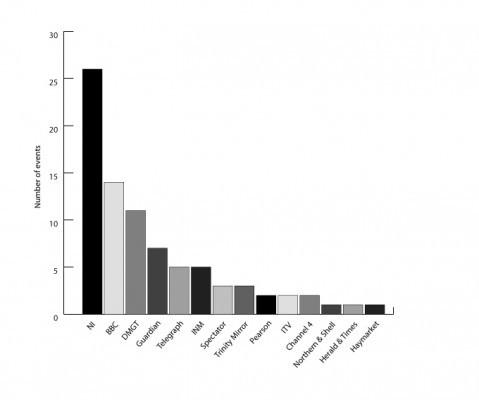 Graph showing number of events hosted by media companies for No. 10 advisors