Ed Miliband pledged to reduce union financial contributions, but the opposite has happened. Image courtesy of TUC.

Donations to Labour from individuals and companies have plummeted in the past year, leaving the party more reliant on union funding than at any other time in the past decade.

Trade union funding now accounts for 91.3% of cash and non-cash donations to the party’s central office, up from 59.9% last year, data released by the Electoral Commission shows.

By contrast, donations from companies and individuals have fallen sharply since Ed Miliband came to power. Between July 2001 and June 2010, private donations accounted for between 31.5% and 43.1% of party cash. Since July 2010, that figure has nose-dived to 6.6%.

The figures suggest that Ed Miliband’s vow to loosen union influence over the Labour party by reducing their financial contributions has failed spectacularly. In fact, unions have solidified their hold over party finances. 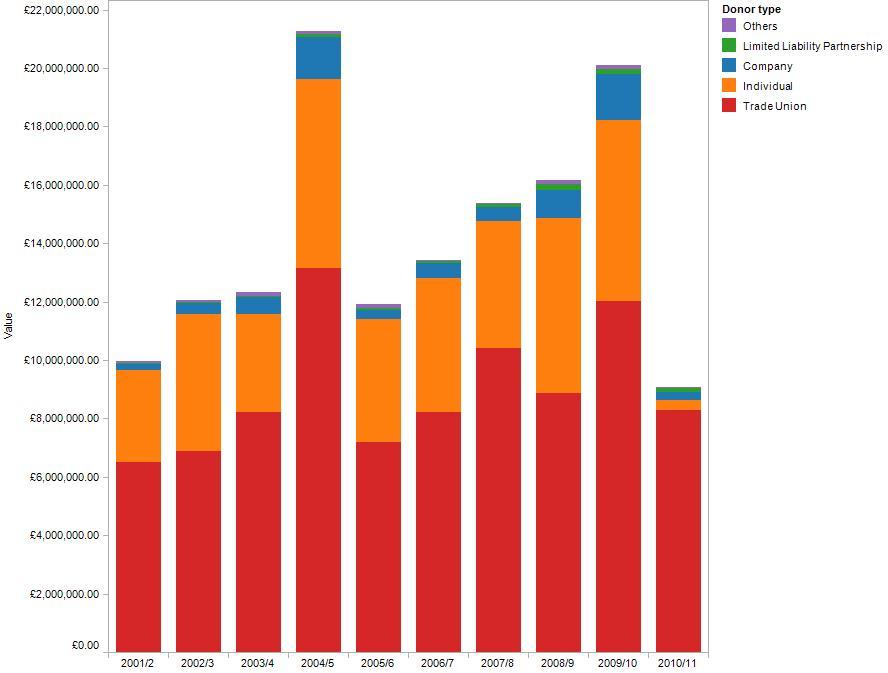 It was union support that allowed Miliband to scrape a victory over his brother David in last year’s Labour leadership contest. All three of the largest unions distributed ballot papers to their members, urging them to support Ed Miliband.  He won with 50.65% of the vote in the fourth round of balloting.

Research published by academics from the University of Bristol earlier this month suggested that union influence in Labour leadership contests extended well beyond the third of the electoral college they are supposed to control, granting them far greater power over the selection of the party’s leader than other party members. The academic research also found that leadership candidates without union backing had unequal access to the Labour party electorate, greatly reducing their chances of success.

Labour has lost a string of wealthy backers since the departure of Tony Blair. Among the lost donors are Lord David Sainsbury, the businessman and former politician who contributed millions to the party’s coffers, including a donation of more than £3m in 2008.  Lord Sainsbury declined to continue his support under Ed Miliband’s leadership. He has continued to donate to Progress, a Blairite faction within the party, and the community group Movement for Change.

Financier Sir Ronald Cohen, who provided £500,000 as recently as 2009, has also stopped contributing.

A donation of £1m promised by property baron Andrew Rosenfeld, one of Britain’s richest men, has yet to appear in the party finance registers of the Electoral Commission. Mr Rosenfeld previously stoked controversy after refusing to accept responsibility for a £68m pension deficit in the retail chain Allders, despite holding a large stake in the company. He recently returned to Britain after having spent the past five years in Switzerland, where he ran the Air Capital property empire.

When challenged by Channel 4’s Jon Snow over attempting to solicit Rosenfeld’s donation, Miliband insisted that the party did not have questions to answer.

‘We are not flouting the rules. He is not a tax exile – just be careful. I think this is very unfair,’ Mr Miliband said. ‘He’s not a tax exile. He went to live in Switzerland and he’s back here’.

The party suffered ridicule when it was revealed that the largest individual donation in the first three months of 2011 – of £10,000 – had come from Tony Blair’s former press secretary, Alastair Campbell.