The NHS is spending almost £25 million a year on a blockbuster anti-depressant drug despite evidence that it has little clinical advantage over an almost identical medication which costs a fraction of the price.

An investigation by the Bureau of Investigative Journalism for The Independent has raised questions about the only head to head independent study to find evidence that Cipralex is clinically more effective in treating depression than its out-of-patent predecessor, Cipramil. Both have a similar main ingredient but Cipralex costs £14.91 compared to just £1.31 for generic Cipramil. The investigation sheds light on the lengths that  pharmaceutical companies go to extend the lives of drugs whose patents are about to run out.

Questioning effectiveness
Cipralex or Lexapro, as it’s known in the US, is one of the most widely prescribed anti-depressants in the world, but has been criticised for being little different from Cipramil, whose patent expired in 2002. There has only ever been one independent direct comparative study which suggests that Cipralex is clinically more effective.

The Bureau’s investigation has now established connections between an individual working for Lundbeck, the Danish company that makes both Cipralex and Cipramil, and Arbacom, a Russian company that sponsored the independent head to head trial.

Several studies have shown that sponsored trials are more likely to find in favour of the sponsor’s drug. While there is no evidence to suggest the results of the Russian trial are invalid, it is the only independent comparison study proving Cipralex’s superiority.

The Arbacom trial helped make the case for the new drug to clinicians – costing the NHS millions extra in prescription costs. Last year the NHS spent around £3.3 million more on Cipralex than on generic Cipramil – although the generic drug was prescribed nine times more often.

A paper based on the Arbacom trial, which was published in November 2007 in the journal Clinical Therapeutics, acknowledged ‘Alexander N. Postnov and Markus Kornfeld at Arbacom for their help in revising the manuscript’. It appears that Mr Kornfeld may have assisted while, at the same time, he and his wife Asa were working for Lundbeck.

How independent are independent trials?
The Bureau has seen an email from Mr Kornfeld, dated August 2005, in which he sent a protocol for the trial to a Russian woman, copied to someone called ‘Alex’, along with a message listing errors in the protocol.

In August 2005 Mark Kornfeld was working as a consultant for Lundbeck. His wife Asa Kornfeld was at that time a senior Lundbeck employee. Mr Kornfeld’s email also forwarded a case report form.

The document’s properties appear to show this had been created only two days previously, and had been modified by a different Lundbeck employee.

Mr and Mrs Kornfeld no longer work at Lundbeck and neither responded to requests for comment.

Anders Gersel Pedersen, Lundbeck’s executive vice-president for drug development, agreed that Mr Kornfeld was working as a consultant at the time, but said that nobody at Lundbeck, to the best of the company’s knowledge, knew about the Russian Arbacom trial at that time. 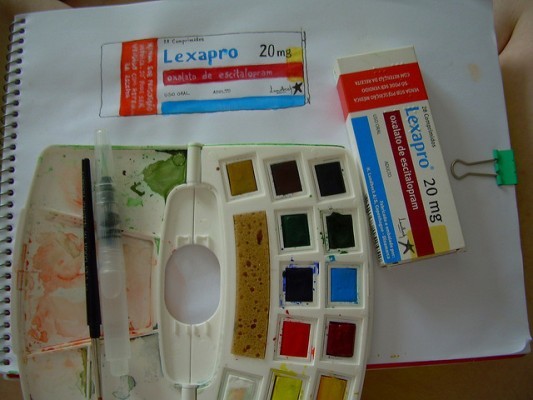 ‘Happiness in a box’ – Flickr/Congalaconga

The Bureau was unable to contact anyone from Arbacom, which does not appear to have been named as a sponsor of any published research before or since.

The Bureau uncovered further apparent connections between Lundbeck and Arbacom. While the Arbacom trial was underway, Lundbeck entered into a research contract for an epilepsy drug with another Russian company,

During 2006 and 2007, when the Cipralex trial was being worked on, Lundbeck negotiated a research contract for an epilepsy drug, VLB01, with Russian firm Valexpharm.

Documents seen by the Bureau attach a value of $2 million to the contract.

Mr Kornfeld, and Alexander Postnov – who were acknowledged  in the Clinical Therapeutics paper analysing the Cipralex trial – were sent the contract. It’s not clear who Mr Kornfeld was working for at this time, but Mr Postnov was using his Arbacom email. Valexpharm appears in some listings at the same address as Arbacom and Valexpharm appears to have registered Arbacom’s telephone numbers. Another employee aside from Mr Postnov also appears to have worked for both companies.

Lundbeck’s head of drug development Anders Gersel Pedersen insisted that there was ‘absolutely no linkage’ between the epilepsy contract and Arbacom’s Cipralex trial. He said that Arbacom had been trying to prove Cipralex and Cipramil were identical, with the aim of making a generic version of Cipralex.

When the results came out proving Cipralex’s clear superiority, he said Arbacom offered to sell the data to Lundbeck. ‘We told them to publish,’ Mr Pedersen said.

He added that the company ended up paying for Arbacom’s data but said there were no known links at the time. ‘Regulators prefer studies done by pharmaceutical companies because they are rigorous. There was no reason at all for us to be involved with the Arbacom trial.’

The cost to the NHS
But the connections between the companies raises further questions over Cipralex – and whether it represents good value for money to the NHS.

The drug has been cited as an example of ‘ever-greening’: a controversial strategy drug makers use to extend the life of a drug patent. When a drug is about to go off-patent, which would allow it to be copied and sold as a cheap generic, the manufacturer slightly changes the chemical make-up of the drug and files a new patent. This version is then protected and marketed as a new drug, although it often contains similar ingredients to the old one.

Cipramil’s patent ran out in 2002, at a time when the drug accounted for 80 per cent of Lundbeck’s revenues. Just before this happened Lundbeck put Cipralex on the market. In Cipralex, the active molecules in cipramil are separated from more inert parts.


‘When resources are limited, giving one patient an expensive drug with no added value when cheaper alternatives exist stops other patients getting treatments they need.’
Senior cardiologist British Medical Journal

In an article in the British Medical Journal a senior cardiologist recommended switching from Cipralex to generic citalopram. He argued: ‘When resources are limited, giving one patient an expensive drug with no added value when cheaper alternatives exist stops other patients getting treatments they need.’

The US drug advisory group Micromedex, which reviews clinical trials from around the world, maintains Cipralex has no significant clinical benefit over its predecessor.

Lundbeck was also rapped over the knuckles by the UK drug industry regulator in 2003 for exaggerating the benefits of Cipralex over Cipramil. The Prescription Medicines Code of Practice Authority found Lundbeck had breached its code of practice by claiming Cipralex was better at treating depression. Lundbeck also attributed adverse effects to Cipramil that it had not highlighted before.

Press coverage of the PMCPA case made much of the fact that Lundbeck’s claims for the new drug were based on an analysis by a US academic, Dr Jack Gorman. Gorman had received $5000 dollars in consulting fees from Forest Laboratories, which manufactures Cipralex in the US – a sum he quite properly acknowledged.

But despite Gorman’s positive review, independent analyses by the US Food and Drug Administration and the Danish agency for evaluation of medical products found Cipralex offered no significant benefit over its predecessor. In 2004 a research team from Sahlgren University Hospital in Gothenberg, Sweden, also analysed Lundbeck’s trials and concluded ‘the manufacturer’s claims of superiority for Cipralex over citalopram are unwarranted’.

But within a few years four new head to head trials had been published proving Cipralex’s superiority – although only one was independent of Lundbeck.

Lundbeck rejects suggestions of evergreening in the case of Cipramil and Cipralex.’That is simply not the case,’ said Mr Pedersen. Lundbeck also pointed to an evaluation by Swedish health authorities in 2008, which concluded Cipralex is the most cost-effective anti-depressant available.