Technology from an American company is being used by the Syrian government to censor the Internet and monitor dissidents, according to activists.

The equipment produced by a major SiliconValley company, Blue Coat, allows corporations and governments to manage data traffic. But it can also be used to monitor users and block access to certain websites, such as social networking applications like Facebook and internet phone sites like Skype, which were key to the Arab Spring uprisings in Egypt and Tunisia.

Activists are now concerned that the Syrian government ruled by the al-Assad family is using the Blue Coat technology to help crack down on dissidents who are protesting against the autocratic government of President Bashar al-Assad.

In August Telecomix, a group founded by Swedish ‘hacktivists’, which has provided technical support to dissidents in the Middle East on encryption and creating local communication systems, downloaded 54 gigabytes of Syrian telecommunications data.

According to the activists the data showed that technology from Blue Coat– a SG-400 and a BlueCoat Proxy SG-9000 – were used to filter Internet communications in the country.

Sanctions prevent US companies trading with Syria. US officials said they are reviewing reports that Syria’s government is using the company’s products. ‘The issue of Blue Coat’s technology being used in Syria is one that the State Department is taking very seriously and is very concerned about,’ said a State Department official who would discuss the matter only on the condition of anonymity.

When asked about the revelation Steve Schick, a Blue Coat spokesman wrote in an email to Slashdot, a technology news site: ‘We see no firm evidence that would determine there is Blue Coat equipment in Syria.’

However, Schick did not rule out the possibility that the equipment could have been bought via a third party re-seller, noting that Blue Coat equipment can be found on websites like eBay. 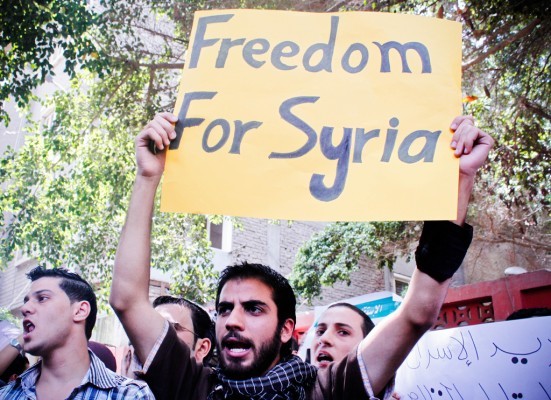 Suppressing opposition
Syria has been ruled by the al-Assad family for the last 40 years which has suppressed freedom of speech as well as political opposition. The civil unrest has been met with violent government crack downs, which  last week the UN High Commissioner for Human Rights estimated had killed over 3,000 people since the beginning of the year.

It is not the first country to come under scrutiny for the possible abuse of surveillance technology. Documents found in Libya after the toppling of the Gaddafi regime indicate that equipment from Amesys, a French company, was being used by the intelligence authorities, while equipment from Gamma Group, a UK company, has been found in Egypt. Similar questions have been raised about the use of Trovicor equipment in Bahrain.

State surveillance using these devices has real world consequences – enabling governments to arrest and torture peaceful dissidents. In the wrong hands, these machines can be as dangerous as a club or gun.’
Peter Fein, TeleComix

Blue Coat was originally called CacheFlow Inc. when it was founded in 1996 by two investors – Michael Malcolm and Joe Pruskowski.  It has grown rapidly and last week the company announced that 85% of Fortune Global 500 companies are now Blue Coat customers.

In September it announced that Afribone, an internet provider in Mali, had bought one of its systems to help it manage traffic spikes.

Blocking sites
In a press release Blue Coat also announced that the equipment sold to Afribone could provide ‘URL filtering to meet cultural and regulatory requirements’. In other words it could be used by authoritarian governments to make sure that citizens do not access certain sites.

The company has for a long time aggressively marketed its ability to block technologies like Skype, a free Internet telephone system, a move which it claims can help reduce traffic.

But Eric King, head of the Big Brother Inc project at Privacy International, a London-based group that tracks the use of surveillance equipment  said: ‘In the wrong hands, Blue Coat technology can all too easily be used as a tool of political control. It gives governments the ability to spy on an entire population’s internet activity and to target dissidents, activists and political opponents with ease.’

Throughout the Middle East, governments as well as telecommunication providers block Skype and other social network applications for commercial as well as political reasons. Blue Coat is one of the leading suppliers of this technology – the company was awarded the title of ‘Networking Vendor of the Year’ in Dubai in 2010. The company’s biggest customer in the region is Saudi Arabia but it also has major sales in United Arab Emirates, Qatar, Kuwait, Oman and Yemen.

Blue Coat is not the only vendor of Internet traffic management products. Cisco, another Silicon Valley company, sells a competing product, as does Ipoque in Germany. These companies also offer sophisticated add-on tools which allow buyers to track users in great detail.

‘Internet censorship systems like Blue Coat’s are being used to prevent Syrians of every political stripe, including those not politically active at all, from accessing sites we in the West take for granted, such as Facebook and Twitter,’ said Peter Fein, a member of TeleComix based in Chicago. ‘State surveillance using these devices has real world consequences – enabling governments to arrest and torture peaceful dissidents. In the wrong hands, these machines can be as dangerous as a club or gun.’