The UK government has violated the freedom of the press, the European Court of Human Rights ruled today following a four year case brought by the Bureau of Investigative Journalism.

In a significant win, which has major implications for the UK government, the ECHR in Strasbourg ruled that mass surveillance by GCHQ and other intelligence agencies without adequate safeguards to protect the freedom of the press is unlawful.

The case will force the government to review how it intercepts journalists’ communications and to put better safeguards in place to ensure that a journalist can continue to properly protect their sources.

The Bureau’s case was part of a wider submission brought by human rights organisations including Amnesty, Privacy International, and Liberty following the revelations about the invasive surveillance by GCHQ and other agencies revealed by Edward Snowden in 2013.

The Bureau was specifically concerned about the chilling effect that mass surveillance may have on whistleblowers seeking to reveal wrongdoing to investigative journalists, and the difficulty of guaranteeing a source’s anonymity when communications are being monitored in such a pervasive way.

The Bureau’s Managing Editor Rachel Oldroyd welcomed the ECHR judgment: “The Bureau believes the freedom of the press is a vital cornerstone of democracy and journalists must be able to protect their sources. We are particularly concerned about the chilling effect that the threat of state surveillance has on whistleblowers who want to expose wrongdoing, and this ruling will force our government to put safeguards in place. It is an extremely good day for journalism."

The court was particularly worried about the potential deliberate targeting of journalists work by security agencies without measures in place to protect confidentiality. The court “expressed particular concern” about the absence of any published safeguards relating to the circumstances in which confidential journalistic material could be selected.

The court found that the UK government was in breach of Article 10, the right to freedom of expression, because of the “potential chilling effect that any perceived interference with the confidentiality of journalists’ communications and, in particular, their sources might have on the freedom of the press.” 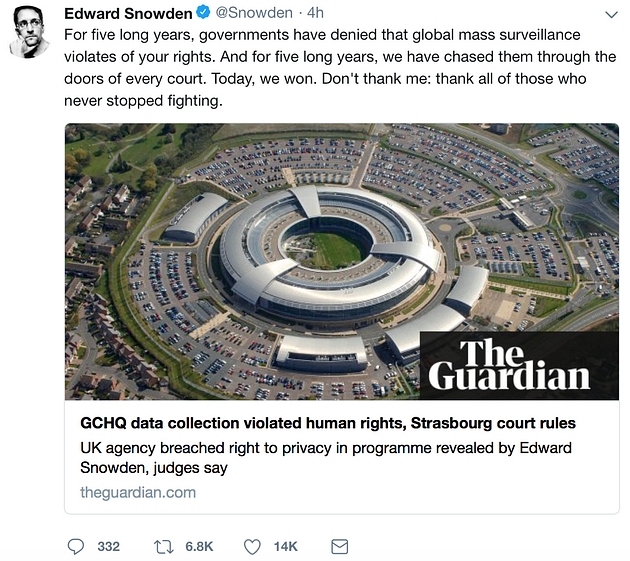 "Journalists need to be able to interrogate a wide range of sources in the knowledge that confidentiality promised can be delivered. Without that a free press would die"

The case was taken in the name of the Bureau and Alice Ross who was the journalist in charge of our drones programme at the time. Over the four years since the case was filed she moved to the Times and then Guardian and is now at Greenpeace.

Rosa Curling of law firm Leigh Day, who represented TBIJ at the court, said: “Today's ECHR judgment should put an end to our security services and police forces using the mass surveillance of communications to identify journalists’ sources.”

Gavin Millar QC, also counsel for TBIJ, said: “The government must now rewrite the law as to how the security and intelligence service can look at and use journalists confidential communications and material. Secretive arrangements like these cannot continue. There must be a public interest which overrides the vital right to journalistic free speech before officials can scrutinise such material.”

Founders of the Bureau David and Elaine Potter backed the case. “We strongly believe that this is not just relevant to journalism but to society itself. Holding the powerful to account is the most important duty of a free press," they said. "To do so journalists need to be able to interrogate a wide range of sources as well as data in the knowledge that confidentiality promised can be delivered. Without that a free press would die."

The case was brought to the ECHR in 2013, following Edward Snowden’s revelations that GCHQ was secretly collecting, storing and analysing the private communications of millions of British citizens. Snowden also revealed that this information was being shared with foreign governments, including the US, in a mass surveillance programme with no basis in law or proper safeguards.

After the judgment was published Snowden tweeted "for five long years, we have chased them through the doors of every court. Today, we won. Don't thank me: thank all of those who never stopped fighting". 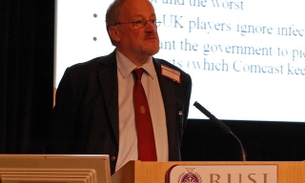