A chiropractor struck off by the General Chiropractic Council (GCC) in 2009 is continuing to practise as a ‘spine specialist’, in a case that has raised serious concerns about a loophole that could be putting patients at risk.

The case illustrates how a practitioner struck off by a professional regulator can continue working simply by changing the description of his or her job.

Dr Simon Peck, head of investigations and medical advice at AXA PPP, said: ‘It is bad enough that practitioners continue to see patients after they are supposed to have been stopped from doing so. It is even worse that the current system simply moves them from a regulated environment to an unregulated one.’

Christian Farthing, who practices from the Ideal Spine Centre at the Canterbury Health Practice, was suspended by the GCC in 2003.

He had exerted ‘undue influence’ on patients, by ‘exaggerating the consequences of failing to have regular chiropractic care’ in an attempt to ‘reinforce the need to attend a lengthy course of treatment’, the GCC said.

The regulator also found he had X-rayed patients without clinical justification. Mr Farthing told the Bureau he had actually asked the GCC to remove him from the register in 2003, but the GCC refused.

The GCC’s finding on the X-rays was due to the body’s interpretation of the law, he added. Authorities that regulate the use of X-rays inspected the Centre in 2004 and 2011 and found it compliant with the relevant laws.

But Mr Farthing was struck off in 2009 after continuing to advertise himself as a chiropractor while suspended – behaviour which was ‘fundamentally incompatible with continuing to be a registered chiropractor,’ the GCC’s professional conduct committee said.

Regulating private healthcare
The Ideal Spine Centre currently advertises spinal care as a means of treating allergies and asthma, emphysema and bronchitis. Yet GCC guidance says patients should be advised against spinal manipulation as a treatment for asthma.

One local GP also told the Bureau patients of Mr Farthing had recently complained to him of being given a ‘hard sell’ – which Mr Farthing denies.

As Mr Farthing has been struck off by the GCC, the body no longer has any power over his activities.


We are aware that a small number of practitioners who have been erased from their professional register continue to see patients afterwards. Provided that they are careful not to say that they are registered it appears that they are not breaking any laws.
Dr Simon Peck, AXA PPP

A spokeswoman for the GCC said: ‘We have highlighted what Christian Farthing is doing and what he’s done, and we’ve done everything that is in our power to do. We would stress the importance of patients checking that any private healthcare is regulated by an appropriate statutory body.’

Chiropractors are not registered with the healthcare watchdog, the Care Quality Commission (CQC), as this body only covers services provided by certain classes of professional.

Chiropractors and osteopaths are not covered.  This is despite a 2010 review of deaths following chiropractic spinal manipulation, which concluded the risks of the treatment far outweighed the benefits.

Mr Farthing, however, is not an isolated case.

Dr Peck said: ‘We are aware that a small number of practitioners who have been erased from their professional register continue to see patients afterwards. Provided that they are careful not to say that they are registered it appears that they are not breaking any laws.’

In 2000, the Daily Telegraph revealed how a psychiatrist suspended by the General Medical Council for having sex with a patient had continued to practise as a psychotherapist.

Chiropractic treatment
In 2008 Mr Farthing was rapped over the knuckles by the Advertising Standards Authority over leaflets suggesting he was a medically qualified doctor.

The ASA said references to ‘Dr Farthing’, and ‘Spinal Specialist’ ‘gave the impression that Christian Farthing was a registered medical doctor who was a specialist in the spinal field.’

A disclaimer in the small print pointing out that he was not a medical doctor was insufficient, the watchdog added.

The front page of the Ideal Spine Centre website says: ‘Dr. Farthing originally qualified as a Chiropractor in Australia, then did post graduate studies to practice as a Spinal Specialist in the United Kingdom’

It adds ‘for more information on our Doctors please click here‘. Clicking through takes the reader to a section titled ‘Meet the Doctor‘, a page devoted to Mr Farthing’s biography and current activities.


‘We have highlighted what Christian Farthing is doing and what he’s done, and we’ve done everything that is in our power to do. We would stress the importance of patients checking that any private healthcare is regulated by an appropriate statutory body.’
Spokeswoman, General Chiropractic Council

Halfway down the page is a statement that ‘Dr. Farthing is not a Chiropractor, Osteopath or Medical Doctor. He specialises in spinal correction and now practises in Canterbury as a Wellness Doctor and Spinal Specialist.’

Elsewhere, the site attempts to explain why Mr Farthing is not practising as a chiropractor in the UK. ‘I am a Chiropractor in Australia, but due to the narrow scope of the chiropractic profession in the UK and my extended studies, I now practise as a Spinal Specialist. This means, instead of just patching you up, we look to correct your problem,’ it says.

Recent on-line comments recommending treatment at the Canterbury centre suggest patients may be unaware of the distinction between a spine specialist and chiropractor. ‘Dr. Christian Farthing is the first chiropractor I have seen who could actually help me,’ said one anonymous comment.

There is no suggestion that by setting up as a spine specialist Dr Farthing is doing anything illegal or breaking any professional codes as he is currently unregulated.

Dr Peck said he was aware of another doctor who was struck off by the GMC some years ago but still runs a clinic and describes himself as a ‘doctor and nutritional physician (not GMC registered)’.

‘We have raised our concerns with various authorities and been told that nothing can be done. This is unacceptable and there is a need for better patient protection,’ he said. 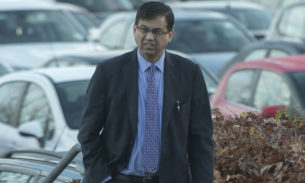