In 2005, following a successful pro-democracy uprising in Ukraine, a new youth movement, Nashi, was founded in Russia, reportedly using $20m supplied by the Kremlin. While the Nashi billed itself as an anti-oligarch, nationalist organisation, its critics say it is closer to Putin’s private army – and with 120,000 members, it’s a force to be reckoned with.

In an Unreported World documentary on the Nashi, filmmaker James Jones found its diehard members harassing environmentalists who were protesting projects linked to Putin’s cronies, while even the police appeared to be scared of interrupting them as they sprayed anti-American graffiti outside the US Embassy in Moscow.

There are more sinister incidents: a journalist was beaten to within an inch of his life after writing an article that was critical of Putin; he told Jones he believes Nashi was behind the attack.

Here, James Jones explains how the Nashi have become so powerful:

On Wednesday, Russian journalist and novelist Zakhar Prilepin gave a talk with Jones in London, in which he described the typical Nashi member as part of the ‘Mowgli generation’. Having grown up during the turbulent 1990s, they have ‘no concept of honesty or having a conscience’, and are motivated by career, he said.

The Nashi’s members, who tend to come from desperately poor areas of the countryside, idolise Putin as a strongman who has brought security and prosperity to the country.

The organisation promises these young people stability, status and flashy gadgets: the movement’s large Moscow headquarters is full of iPads and other fancy technologies. And its members believe they will be rewarded for their loyalty later in their careers.

‘It’s a horrible form of legalised prostitution – only a handful of people in the organisation of hundreds of thousands of people will get the career that’s promised to them,’ said Prilepin.

The movement was supposed to come into its own during the pro-democracy protests last year: the Nashi and other groups loyal to the government were invited to rally to demonstrate overwhelming support for Putin and the government. But these efforts were initially undermined by Russia’s endemic corruption, Prilepin said.

Outraged by this, Putin sacked a senior member of the Kremlin for the debacle and organised a fresh rally – this time, the money went to its intended destinations and thousands attended the mass event, alongside other groups loyal to Putin. Meanwhile, although it was briefly fashionable to be a pro-democracy protester, the movement received no television coverage and quickly fizzled out. The opposition missed the biggest opportunity for revolution in a generation, Prilepin said.

Towards the end of the talk, an audience member asked Prilepin what would persuade Putin to adopt democracy in Russia. The audience, largely made up of Russians, laughed.

There was a long pause while Prilepin considered his answer.

‘You’ve put me down a blind alley,’ he responded. ‘There’s just no way of changing it.’ 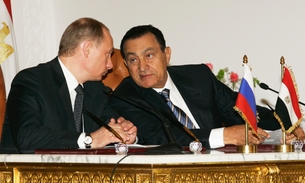