You would expect a huge accountancy firm to have a clear idea of the value of its time. So when the ‘big four’ firms offer their expertise for free they in particular ought to know what it is costing them – and would have reckoned up the benefits.

Deloitte, Ernst & Young, KPMG and PricewaterhouseCoopers (PwC) have given donations of ‘staff costs’ worth £1.36m and consultancy work totalling almost £500,000 to political parties since May 2009, according to Electoral Commission records. Work was provided for all three main political parties.

The firms also ‘loan’ staff to the government: in the past year, 15 staff members from top accountancy firms have been on secondment to the Treasury, alone.


Conflicts of interest are built into the very DNA of the big professional services firms. These companies are working with firms that need to be regulated and the government bodies that are regulating.’
Andrew Simms, New Economics Foundation

Conflicts of interest
The scale of ‘big four’ involvement with parties sparked concerns over how they might influence government policy as they simultaneously work with virtually all FTSE 100 and FTSE 250 companies.

Andrew Simms of the New Economics Foundation thinktank said: ‘Conflicts of interest are built into the very DNA of the big professional services firms. These companies are concurrently working with firms that need to be regulated and the government bodies that are regulating. It all comes back to the same people.’

Labour MP Austin Mitchell described the big four as being ‘more powerful than government’. He said the companies’ financial success allows them privileged access to government policy makers. ‘They are the only ones who can afford to offer their staff for secondment,’ he said.

Which company donated what to which party?

Secondments
Employees from the four top accountancy firms have been sent to work with MPs, political party offices and governmental departments.

There is no central register recording the total number of secondees in government departments. But in the past year 15 individuals have been seconded to the Treasury from external accountancy firms, according to information obtained by the Bureau under the Freedom of Information Act. All but one came from a big four firm. The placements ranged from five months to two and a half years, with the average time spent at the Treasury lasting for 19 months.

Related article: Streets paved with gold – The local authority working for the banks

Undoubtedly having insider information is beneficial. That is why the ‘big four’ second staff.’
Corporate accountant

Corporation tax
There is wide concern that these secondments provide leading accountancy firms with access and influence under the radar.

Prem Sikka, professor of accounting at University of Essex, said: ‘They [accountancy firms] have been campaigning for a reduction in corporation tax rates. They win the majority of their business from companies; they’re batting for them.’

A Labour spokesman said: ‘Given the complexity of government decisions in areas such as tax policy – and that opposition parties do not have significant access to civil servants – the support provided by organisations such as PwC helps ensure that there is better scrutiny of government policy … Secondees do not influence opposition policy decisions. Where organisations provide staff to support research and analysis for opposition parties it is right that these are declared –as currently happens – in the register of members’ interests.’

Tax issues
In 2009, George Osborne and then shadow minister MP Greg Hands received support from Deloitte in the form of ‘services and advice provided in connection with the Eggar report’. This report informed the Tories’ March 2010 energy paper Rebuilding Security, in which they promised, if elected, to reform taxation and licensing to promote offshore oil and gas development.

But as well as having tax expertise, Deloitte’s Petroleum Services Group involves ‘clients across the oil and gas sector’ who would have benefited from the paper’s proposed changes to taxation.

Related article: House of Bankers – 16% of Lords are paid by City firms

Winning contracts
Deloitte’s links to the Conservative party have been questioned in the past. In January, Labour MP John Robertson used written parliamentary questions to reveal that Ingeus Deloitte, which is 50% owned by Deloitte, won lucrative contracts through the government’s Work Programme worth nearly £774m.

The Department for Work and Pensions said at the time: ‘Contracting followed a strict code of practice and was open and fair. Ministers did not intervene or attempt to dictate the outcomes.’

A senior corporate finance accountant from a leading accountancy firm outside the big four said: ‘It’s not so much that they’ll get awarded contracts because the government has a transparent tendering process. But by having secondees working with politicians they will have an insider advantage, knowing when contracts are coming up and even getting themselves on a tender list. Undoubtedly having insider information is beneficial. That is why the big four second
staff.’

Oligopoly
In March 2011 a report by the House of Lords economic affairs committee criticised the big four’s ‘oligopoly’, suggesting their ‘dereliction of duty’ contributed to the financial crisis and the downfall of Northern Rock. The announcement did nothing to stop political parties from accepting assistance from these  companies. PwC and KMPG are registered as giving a combined £259,077 worth of staff costs to political parties since the report was released. 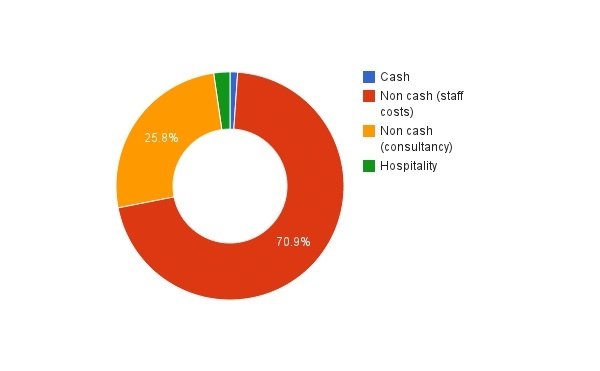 How donations came in (all parties)


Who gave how much?
• The most generous company was PricewaterhouseCoopers, which has given over £900,000 in cash, staff costs, consultancy and hospitality over the past three years.

When asked about their secondment policies, the four companies said:

It is Deloitte’s policy not to give cash contributions to any political party or other groups with a political agenda. However, we do seek to develop and maintain constructive and balanced relationships with each of the main political parties and may make available staff and adviser resources, and technical and factual information on occasion.’

in the interests of the firm and its clients, we seek to develop and maintain constructive and balanced relationships with the main political parties. In pursuit of this objective, we may … provide limited non-cash assistance to those parties in areas where we have appropriate expertise.’

KPMG has a policy of seconding senior members of staff to all three major political parties, to underpin the fact that KPMG has a strong interest in good and practical public policy.’

‘As a firm we do not comment on the work we do for organisations, whether paid or pro bono.’ 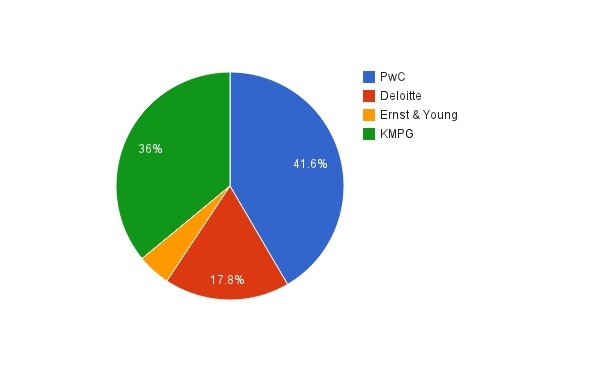