Victims of rape are being dismissed  (Image: Rape by Shutterstock.com)

The Metropolitan Police Service is significantly under-recording rape offences according to new evidence presented to MPs.

The public administration select committee has been told that a large number of rape and other sexual offences are being wrongly categorised, and therefore not included in official crime statistics.

Serving police constable James Patrick, who analysed a sample of allegations made to the Met police force in financial year 2012/2013, said that rapes could have been under-recorded by over 24% and total sexual offences by almost 22%.

Up to 900 additional crimes of rape and two thousand sexual offences in London should have been recorded, he said in written evidence to the committee.

Separate data collected by the Bureau through Freedom of Information reveals the extent to which reports of rape have not been recorded as crimes by Scotland Yard over five years.

In the year to March 2013, 29% of rape allegations were not recorded as criminal offences.

In each year since 2008/2009, the figures have been over 25%. In 2009 the Met’s specialist sexual offences unit, known as Sapphire, was re-structured after a series of scandals involving failures to record and investigate offences. Following the restructuring detection rate targets were scrapped after the discovery that police officers were not recording some of the hard to solve cases, thus pushing up detection rates.

Since the reorganisation, the Met has repeatedly said that it has been taking all rape allegations seriously. It supports this claim by pointing to the rapid decline in the number of cases classified as ‘no crimes’.

Following an allegation a police officer has to decide whether to investigate a case further or to drop it because the allegation does not represent a crime – when it is classified as a ‘no crime’.

The number of rape allegations being classed as ‘no crimes’ have dropped from 19% of all allegations to 9.8% since 2009.

However the Bureau’s investigation shows that this is only part of the picture. While the number of allegations classed as ‘no crimes’ has dropped, another similar classification – ‘crime related incident’ (CRI) – has risen proportionately and now accounts for almost 20% of all rape complaints. CRIs are not recorded as a crime either.

The data given to the Bureau is particularly concerning in light of the written evidence presented to MPs by serving officer James Patrick.

Mr Patrick’s analysis of a sample of rape cases found that 70% of those cases classed as crime related incidents should have been recorded as crimes. Eighty per cent of rape cases that had been ‘no-crimed’ raised concerns, he added.

He revealed that he had consulted the force crime registrar, who is responsible for auditing no-crime and CRI decisions. ‘Disturbingly, I found that rape was prioritised well under petty theft and subsequently was not regularly audited at all due to the volume of work,’ he said.

Officers are only allowed to record a rape as a ‘crime related incident’ if the offence is unconfirmed, for example if the assault is reported by a third party without identifying the victim. 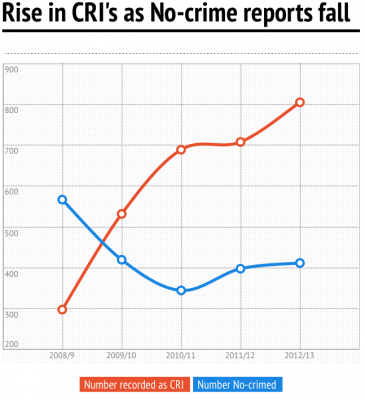 All decisions to ‘no-crime’ a rape are reviewed by a central crime management unit within the Met, which is independent of the specialist sexual offence team. This unit is held to account by the Met’s crime registrar.

In 2012 a report by Her Majesty’s Inspectorate of Constabulary found that nationally, on average 90% of ‘no-crime’ decisions on rape were correct.

A Metropolitan police spokeswoman said the force was committed to recording all allegations of sexual abuse.

‘Following such reports a thorough investigation is conducted by trained officers.

‘We actively encourage individuals who have been subjected to these abhorrent crimes to come forward and report to police.

‘As a consequence reported rape allegations have increased by 30% indicating a renewed confidence in the response of police.

‘Sapphire became a Specialist Crime Command in 2009. The methods of evaluating performance has [sic] been subject to a review and in response the MPS no longer considers charges in the context of crimes reported.

‘There is no longer an incentive or benefit to reduce the numbers of allegations recorded.’

Data given to the Bureau