By Nick Mathiason , Will Fitzgibbon

Housing schemes developed by the Crown Estate and Prince Charles’s Duchy of Cornwall regularly fail to deliver the recommended number of affordable homes in a revelation described as ‘concerning’ by a senior MP.

Amid an escalating national housing crisis, planning documents unearthed by the Bureau of Investigative Journalism reveal that both historic landowners repeatedly persuade councils that to meet their affordable housing targets would be too expensive resulting in the loss of dozens of low cost homes from royal housing schemes.

The Bureau’s investigation has identified Crown Estate and Duchy plans to build 4,299 homes in 31 housing schemes. Of these, 14 developments set to produce 2,470 units fail to meet local affordable homes targets, resulting in at least 213 fewer affordable homes being built.

The Bureau has established that ten of the Crown Estate’s 19 largest developments generating 2,715 homes have not or will not meet local affordable housing targets.

‘I find that quite concerning,’ said Clive Betts, chairman of the powerful communities and local government select committee. ‘They have a special obligation beyond the ordinary developer and they ought to be doing what’s right by the community…They ought to be taking the lead, especially as it’s public land after all.’

Related story: Get the data – royal and historic housing developments

In its most recent set of financial results published in June, the Crown Estate stated it owns property and land worth £8.1bn, claimed that it ‘outperformed the market’ and achieved a £252.6 million surplus.

George Mudie MP, chair of the Treasury Sub-Committee which scrutinises the Crown Estate’s affairs, said that in light of the Bureau’s findings he will now demand the Crown Estate increases its affordable housing contributions when its senior management next face MPs.

‘Particularly as we’re in a housing crisis, I think it is a time when they definitely should be setting an example by meeting affordable housing targets…I would expect a body such as the Crown Estate – and would be saddened if it were not the case – to meet affordable targets,’ says Mudie.

I find that quite concerning. They have a special obligation beyond the ordinary developer and they ought to be doing what’s right by the community…
Clive Betts, chairman of the powerful communities and local government select committee.

Although not legally binding, local authority affordable housing targets, usually expressed as a percentage of the number of overall homes to be built, are based on local housing demand, cost and supply plus local wages.

But if a developer can demonstrate through a site-specific assessment that the target makes a development unviable, then the requirement can be reduced or waived. Under planning rules, developers are entitled to expect 20% of the revenues generated by a scheme.

There are 1.69 million households waiting for a home in England – up 33% in ten years. The number of households in temporary accommodation has increased by 8.3% over the past year to 57,350.

The Crown Estate told local councillors that delivering more affordable homes was not possible because its financial return would be ‘at the lower end of the national benchmark’. The Crown Estate agreed to pay £8m towards infrastructure including a park and community facilities and the level of affordable housing may rise by a maximum of 50 units – but only if its profits on the scheme increases.

In Rushcliffe, Nottinghamshire where Bingham is situated, there are 804 households waiting for a home. Nottinghamshire saw a 7% rise in its housing list to 24,222 in the past year.

From the Crown Estate’s growing surplus, 15% is given to the Queen via the Treasury to support her duties as head of state. Thanks to the Crown Estate’s improving financial performance, the Queen’s income is set to increase 5% from £36.1m to £37.89m.

‘Our experience is that the Crown Estate is not a particularly generous land owner,’ says Councillor George Davidson, who spoke against the Crown Estate’s plans for Bingham during a committee meeting last April and is just one of a number of councillors who condemned the Estates’ affordable housing strategy.

But Steven Melligan, Strategic Land Manager at The Crown Estate said: ‘We are extremely proud of the contribution we make to providing much needed new housing, both market and affordable, across the country.

‘For new homes of any sort to be built, schemes must be commercially viable which is why a suitable package of wider benefits, of which affordable housing is just one part, is agreed with local councils based on their priorities for the local area. At Bingham, for example, in addition to providing hundreds of new affordable homes, the package agreed with the local council also includes an £8m contribution which will go towards local services like healthcare, education and transport infrastructure.

Our experience is that the Crown Estate is not a particularly generous land owner.
Councillor George Davidson

‘Our statutory responsibility to ensure we receive best value on all transactions means that our approach to delivering commercially viable, sustainable developments is no different to that of any other commercial developer.’ 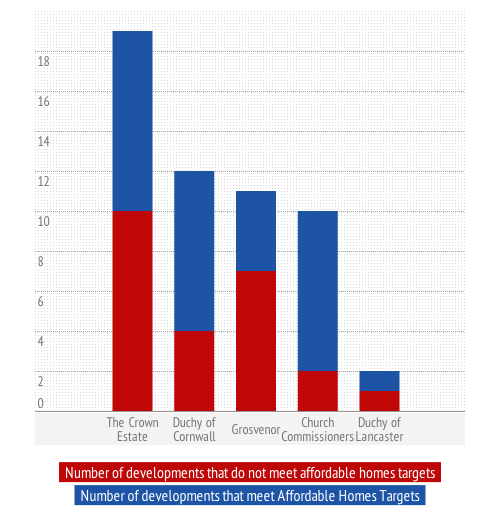 This is despite the Prince’s vocal concern about ‘the desperate effect the lack of affordable housing was having on the social and economic fabric of rural communities.’

The Duchy, which last year paid out £19.1m to the Prince, is behind 12 planning applications in Cornwall, Devon, Dorset and Oxfordshire that combined will generate 1,584 new homes.

At Tregunnel Hill in Newquay, Cornwall; the Duchy backtracked on initial commitments and reduced the number of affordable homes it originally agreed to build on a 174-home site.

Although the Duchy committed to build 35% affordable housing, it subsequently persuaded Cornwall Council that the withdrawal of a government housing grant to subsidise affordable homes meant it had to renegotiate and offer 27.6% or 48 affordable homes.

The Duchy’s revised proposal to Cornwall Council was clear that it would not build any homes if the council did not accept the reduction.

The offer scrapped all social rent properties, despite earlier indications that social rent – which offers the cheapest tenure for those in need – would make up one-third of all affordable homes. The Duchy also abandoned plans for a playground, opting instead to upgrade an existing park at an ‘acceptable walking distance’ of 15 minutes away on foot.

‘Given Prince Charles and others associated with the Duchy making statements about social improvements, they should put their money where their mouth is,’ says Cornwall Councillor Dick Cole. ‘The bottom line for me is that the Duchy of Cornwall acts like any other developer.’

Cornwall’s housing waiting list, at 28,336 households, has increased 267% since 2010. The region has the highest level of street homelessness outside London, according to Department for Communities and Local Government statistics.

Given Prince Charles and others associated with the Duchy making statements about social improvements, they should put their money where their mouth is.
Councillor Dick Cole

‘With all developments, the objective of the planning process is to meet the local needs of the specific area as set out by the community and the local authority. In the few instances where our developments include slightly less affordable housing, they instead meet the local requirements in other ways, such as providing new schools or better transport. In addition, the Duchy has helped to deliver a number of high quality developments which consist entirely of affordable housing units in areas where provision has been lacking.

The Bureau also assessed the affordable housing delivery records of the Duke of Westminster, Gerald Cavendish Grosvenor, who is the UK’s wealthiest individual property developer, the Duchy of Lancaster, a portfolio of English properties held in trust for the sovereign, and the Church of England whose property assets are worth £1.6bn.

Grosvenor, the property vehicle of the Duke of Westminster, has also refrained from – perfectly legally – building more affordable homes on the grounds of financial viability across the UK.

Seven of its 11 major residential schemes which are expected to deliver 3,296 units and are often developed in joint ventures do not meet affordable housing targets.

This includes Oxford’s biggest residential scheme in a generation. Here, councillors have permitted Grosvenor to provide 40% affordable housing in the 885-home development instead of the usual target of 50%.

Grosvenor’s residential property arm in Britain and Ireland now has £4.8 billion worth of investment and development. Pre-tax profit rose 12.5% in 2012 to £354.4 million.

Two of Grosvenor’s three developments in Westminster, central London, do not provide any on-site affordable housing, Instead Grosvenor does make cash contributions to provide low cost housing in cheaper parts of the capital and is funding a project to combat youth homelessness in Westminster. The project is based on a report that finds ‘constraints on affordable housing’ is a primary structural factor contributing to homelessness.

A spokesperson said: ‘Grosvenor is committed to delivering affordable housing and community facilities on its London estate and as part of other schemes that we develop across the country. We work closely with the relevant planning authority to negotiate and determine the affordable housing provision on a case by case basis, taking in to consideration the historical and listed status of many of our buildings and the evolving planning landscape. Whether affordable housing is provided on site, off site or a financial contribution is made will be dependent on what is appropriate for that scheme, its location and the requirements of the council’s planning authority.’

The Duke of Westminster’s land ownership through the Grosvenor Estate goes back to 1677 with an area that today includes Mayfair, Belgravia and Pimlico. Grosvenor’s residential property arm in Britain and Ireland now has £4.8 billion worth of investment and development. Pre-tax profit rose 12.5% in 2012 to £354.4 million.

The Duchy of Lancaster, whose purpose is to provide “a sustainable and growing income to the Queen” through the management of its 18,200 hectares, has a small residential pipeline. In 2009, it established an Affordable Housing Trust that has so far built 12 homes.

Yet on the Duchy’s largest scheme in East Northamptonshire it offered nine fewer affordable homes than the target sought on grounds that meeting the council’s 40% affordable target was financially unviable on that specific site. The Duchy reported a £12.7m net surplus in 2012.

A Duchy spokeswoman stated that the estate worked in partnership with a developer on the scheme who suggested the scheme would only be viable if the recommended number of low cost homes was reduced.

The Church appears to mostly comply with affordable housing targets. However two schemes, in Bedfordshire and in Leicestershire, fell below council targets.

‘The Church Commissioners do not release details of individual landholdings for reasons of commercial confidentiality,’ a spokesman said. ‘The Commissioners, as a charity, are legally obliged to seek the best terms reasonably obtainable when disposing of interests in land, in accordance with the provisions of the Charities Act.  The money generated by these sales is used to support the mission and work of the Church throughout the country, particularly in areas of need and opportunity.

‘Any examination as to the quantum of affordable housing in the abstract, ignoring the range and sum total of all planning contributions, is misleading.  The preparation of Agreements pursuant to Section 106 of the Town and Country Planning Act 1990 and the Localism Act 2011  takes into account a range of factors, both site-specific and strategic and always in dialogue with the planning authority in question.  This approach of negotiation between planning applicant and Authority is well established and is actively encouraged by the Department of Communities and Local Government in both guidance and recent legislation.’

While the Archbishop of Canterbury, Justin Welby does not have any influence on Church Commissioner’s investment strategy, in a media interview last October, he stated: ‘We need everyone to be able to afford good housing.’