The Home Office, Ministry of Justice and CPS record a wealth of information about crimes and the perpetrators of those crimes. However, much to some legal experts’ dismay, there is no check box to record when a crime is prosecuted under joint enterprise.

Faced with a distinct lack of statistics, the Bureau set out to explore the figures that do exist and, using a series of Freedom of Information requests, collected data that indicated a likely use of joint enterprise.

After a Joint Select Committee hearing and much prompting, the CPS trawled its records for 2012 and found its prosecutors had worked on 139 cases of murder and manslaughter that involved joint enterprise that year. These cases involved 470 defendants, of whom 326 were convicted.

Earlier this year the CPS published its figures for 2013. This data showed its prosecutors worked on 121 cases involving 423 defendants.

The CPS’s figures on joint enterprise use in murder cases are something of a break-through, and represent the first recorded official figures for joint enterprise use. They are also remarkably similar to the Bureau’s data for prosecutions of two or more defendants.

However, in isolation the CPS figures reveal very little about trends in the use of joint enterprise.

Through a series of Freedom of Information requests to the Home Office and the CPS, the Bureau collated figures on the number of times multiple defendants were convicted for homicide.

Although these figures are not definitive, several legal experts agreed that a homicide case with four or more defendants almost certainly would involve the joint enterprise doctrine.

Data from the CPS shows that 1,853 people were prosecuted by the CPS between 2005 and 2013, for homicides that involved four or more defendants.

We wanted to establish how often the joint enterprise doctrine was being used, i.e. the rate of usage. Therefore the number of cases involving four or more defendants was calculated as a percentage of the total number of homicide prosecutions each year. 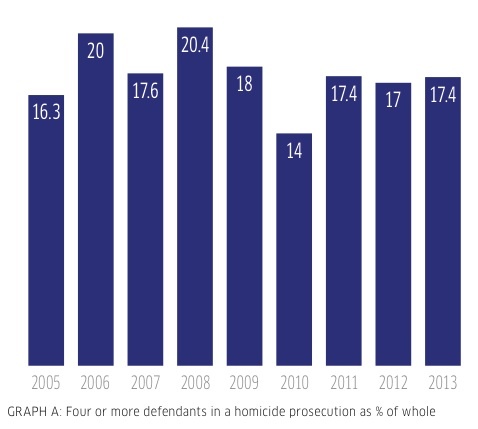 Interestingly, the rate of four or more prosecutions rose slightly between 2012 and 2013, (from 17% to 17.4%). The rise comes over a period when new guidance produced by the DPP on prosecuting joint enterprise offences was introduced.

Between 2005 and 2013 there were 4,590 prosecutions for homicide with two or more defendants. That was equivalent to 44% of all homicide prosecutions in those years.

In 2013, the most recent year for which we have data, 41% of all prosecutions for homicide involved two or more defendants. 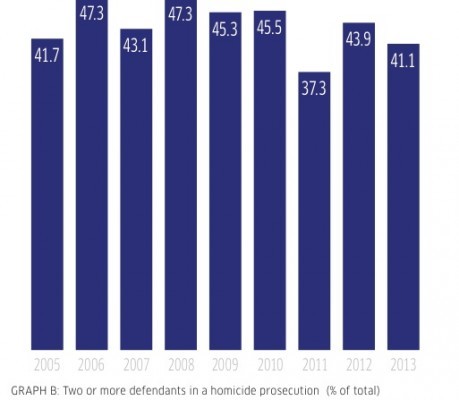 The data also showed that the more defendants involved in a homicide trial, the more likely it was that the CPS would ‘offer no evidence’ against at least one of the defendants, leading to the charge being dropped at trial stage. Between 2005 and 2013 the average was 4.3% of all trials for all homicides, and 5.2% for four or more defendants. 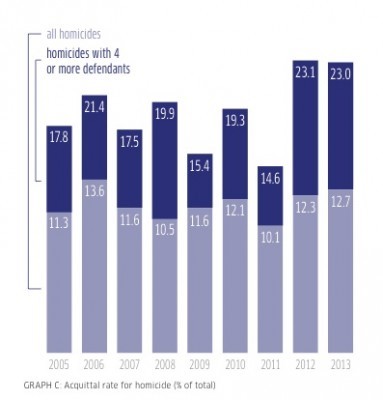 In 2007 the charging options open to the CPS were increased with the adoption of the Serious Crime Act. The Act introduced inchoate offences to cover those culpable by aiding or encouraging crimes.

Inchoate offences were introduced to replace the charge of incitement, and allow for someone to be convicted of encouraging or assisting an offence, even if the substantive act is not realised.

When it comes to charging a group of people for a single crime, these new charging offences can provide prosecutors with alternatives to using the joint enterprise doctrine, meaning secondary parties need not be charged with the principal offence, such as murder.

This is a minuscule fraction of all trials brought to the magistrates courts, but still represents an 11-fold increase between 2009 and 2013. 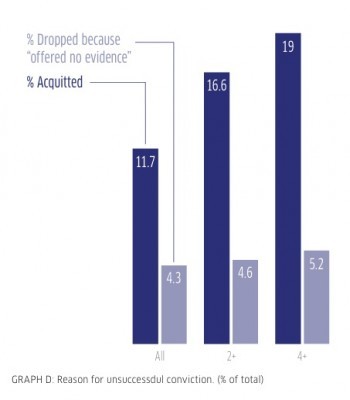