Domestic buildings have been hit by drone strikes more than any other type of target in the CIA’s 10-year campaign in the tribal regions of northern Pakistan, new research reveals.

By way of contrast, since 2008, in neighbouring Afghanistan drone strikes on buildings have been banned in all but the most urgent situations, as part of measures to protect civilian lives. But a new investigative project by the Bureau, Forensic Architecture, a research project based at London’s Goldsmiths University, and New York-based Situ Research, reveals that in Pakistan, domestic buildings continue to be the most frequent target of drone attacks.

The project examines, for the first time, the types of target attacked in each drone strike – be they houses, vehicles or madrassas (religious schools) – and the time of day the attack took place.

Get the data – What the drones strike 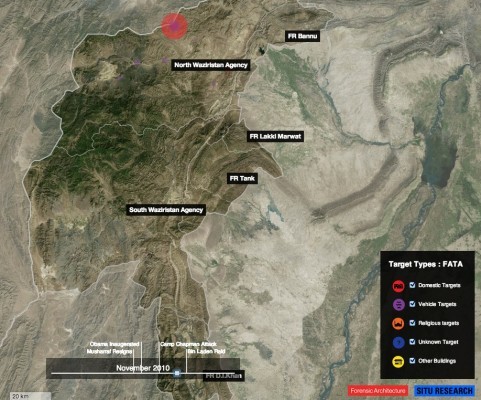 Researchers analysed thousands of reports including contemporaneous media reports, witness testimonies and field investigations to gather the data on drone strikes in Pakistan’s Federally Administered Tribal Areas (Fata). The data is also presented in an interactive online map, titled Where the Drones Strike, showing the location and targets of each strike.

The research reveals a continued policy of targeting buildings throughout the CIA’s campaign in Pakistan, despite an instruction in Afghanistan from the International Security Assistance Force (Isaf), the body which commands foreign operations in the country, that forces operate under the rule that ‘all compounds are assumed to house civilians unless proven to be clear’.

This rule has been in place since at least September 2008 when, according to a leaked classified report, Isaf introduced a Tactical Directive that ‘specifically called for limiting airstrikes on compounds to avoid civilian casualties when Isaf forces are not in imminent danger’.

In both Afghanistan and the tribal areas of Pakistan people tend to live in buildings that are often described as ‘compounds’. Mansur Mahsud, director of Islamabad-based organisation the Fata Research Center, describes the way people live in these areas: ‘One compound is used by many families, like brothers and first cousins, although every family has their own portion or space in the compound. The compounds in these agencies are quite big – most would measure half an acre or more. Normally you will find 20-25 people living in one compound, and in some cases you will find more than 50.’

When drones attack buildings in Pakistan, the target is typically described in media reports as a ‘compound’ – and often as a ‘militant compound’. But these are usually domestic structures, which are often rented or commandeered by militant groups.

A British commander told the Daily Telegraph in 2012 that the UK had stopped using the word ‘compound’: ‘We’re trying to get it into the guys’ heads that this is not compound no 28, it’s 34 Acacia Drive – so you don’t hit it,’ he said.

A Ministry of Defence spokesman told the Bureau this is not official policy, but is ‘very much aligned to our teaching and thinking’. The UK does not carry out drone strikes in Pakistan.

A US official told the Bureau: ‘US counterterrorism operations are precise, lawful, and effective. The United States takes extraordinary care to make sure that its counterterrorism actions are in accordance with all applicable domestic and international law, and that they are consistent with US values and policy.’

While, over the 10 years of the drone campaign in Pakistan, strikes on houses have been more dangerous for civilians, in the past 18 months there have been no confirmed reports of civilian casualties in any attacks – despite a rise in the proportion of strikes that hit houses.

Mahsud says this is partly due to changes in behaviour on the ground. In the early years of the drone campaign, sympathetic locals would sometimes host the militants as their guests, he said, and carry on living in their properties. But the threat of drone strikes means that now, when militants come to stay, civilians usually leave.

There is little locals can do about the prospect of their buildings being damaged, he adds: ‘You cannot say no to the Taliban in Fata.’

The research also reveals that on average more civilians die when a building is targeted than when a vehicle is hit. 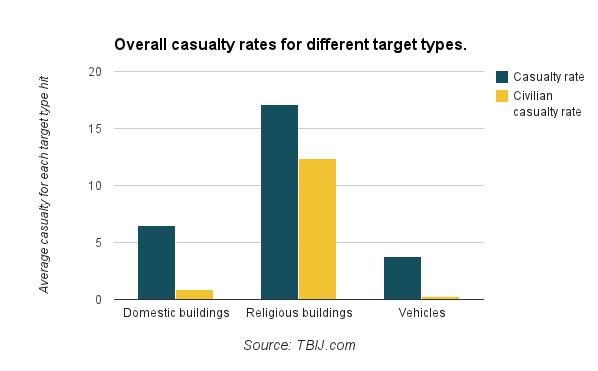 It is also possible that more civilians die in attacks on buildings than the reporting indicates. The Bureau’s Naming the Dead project has found that the deaths of women are particularly vulnerable to being underreported.

Women and children are more likely to stay indoors and therefore less likely to be seen ‘by [a] drone operator monitoring the structure,’ says Susan Schuppli, senior research fellow at Forensic Architecture and the project coordinator. Women and children’s ‘relative seclusion within private space makes them particularly vulnerable to becoming an unknown casualty when a strike occurs’, she said.

Forensic Architecture interviewed a woman who survived a 2010 drone strike. Originally from Germany, she had moved to Pakistan with her husband and his brother. She and a female friend were in the house one evening, when a group of men sitting in the courtyard was attacked. Her son, aged two, was outside the compound walls with his father, who had gone to smoke a cigarette.

‘While we were eating, we heard a very loud bang. The house shook and a lot of earth fell on us from the roof… everything was covered in thick smoke,’ she told researchers. In the courtyard, she saw ‘a big black hole where the rocket hit’, where the men had been sitting to eat.

Everything was burned, she continued. There were ‘pieces of cloth, and metal from the rocket … everywhere there were bits similar to the pieces of flesh of the three men, which were scattered everywhere.’

Her brother-in-law was killed, along with at least four others.

The US official told the Bureau: ‘The US government only targets terrorists who pose a continuing and imminent threat to the American people. Period. Any suggestion otherwise is flat wrong. Furthermore, before any strike is taken, there must be near-certainty that no civilians will be killed or injured – the highest standard we can set.’

Drone strikes are just one of many threats to property in Fata. Localised violence – between rival militant groups, and between the Army and militant groups – is a frequent occurrence, killing civilians and destroying buildings. Since December the Pakistan military has carried out several large-scale bombings on suspected militant targets, including in urban areas. Scores of civilians have reportedly been killed.

At least a quarter of drone strikes in Pakistan hit vehicles – cars, motorbikes and pickup trucks, according to the research, and these attacks were significantly less likely than average to harm civilians. There have been no confirmed civilian casualties in strikes on vehicles at night. 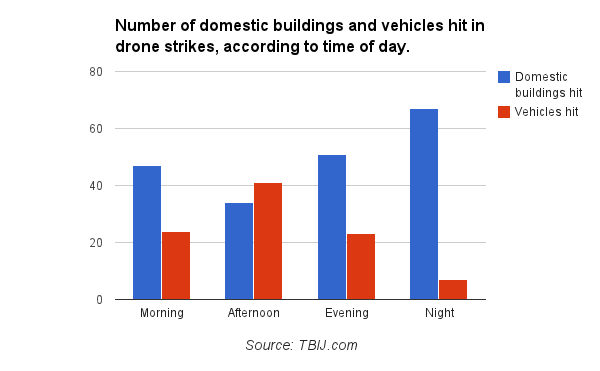 ‘Civilians usually avoid going out at night, because Taliban militants do not allow people to venture out of their homes at night without a valid reason,’ said Mansur Mahsud, of the Fata Research Center.

The Bureau’s analysis found that strikes on mosques and madrassas – religious schools – are the deadliest. At least eight strikes have hit such targets, killing over 17 people on average in each attack. At least 99 civilians have reportedly been killed in total.

The figures for strikes on mosques and madrassas are skewed by a particularly bloody strike that hit a religious school in Chenegai, Bajaur on October 30 2006, reportedly killing 81 people. But even excluding this event, strikes on madrassas and mosques remain far more deadly – including to civilians – than those reported to have hit other targets. Excluding the Chenegai strike, the civilian casualty rate is nine times that of strikes on vehicles – 2.7 for each strike on average.

But here, again, the care taken over the past year to avoid civilian casualties appears to be bucking these historic trends.

The Chenegai attack flattened the building and killed scores of civilians. By contrast, last November a drone strike targeted a madrassa in Hangu, in the first drone strike to hit beyond Pakistan’s tribal regions. The attack took out a single room.

Although there were reportedly up to 80 students in the building, the strike killed at least six men, allegedly militants.

Opposition party leader Imran Khan claimed in a press conference that four children died in the attack, but at the time of writing the Bureau had been unable to confirm any civilian deaths.

An unnamed US official later denied to the Washington Post that the strike hit a madrassa, saying it targeted ‘a compound associated with the Haqqani Network’ near the madrassa.

The difference between these two strikes hints at how the US has adjusted its tactics over the course of the campaign.

US drones fire Hellfire missiles and the much more powerful GBU laser-guided bombs. The Hellfire is a product of the Cold War, designed to destroy Soviet tanks. But the US has adapted the drone-mounted versions, lowering the explosive yield twice, according to Chris Woods, investigative journalist and author of forthcoming book Sudden Justice: America’s Secret Drone Wars.

Reducing explosive power ‘makes a great deal of sense’, Woods adds. ‘A missile designed to bore through thick Soviet armour when used against mud-brick houses in Pakistan is going to have pretty catastrophic effects.’

The US has added new Hellfire variants to its drone arsenal, according to a former drone pilot. These new variants include specialised missiles for attacking vehicles, others with a delayed fuse designed to smash through walls and detonate inside buildings, and anti-personnel missiles with a metal sleeve that splinters on detonation.

When drone strikes started in Pakistan, the CIA only had access to small fleet of slow Predator drones, carrying up to two Hellfire missiles. But when the CIA acquired larger, more powerful Reaper drones, larger and more powerful bombs was added to their armoury.

Meanwhile, the GBU-12 and GBU-38 laser-guided bombs have at least five times the explosive power of a Hellfire and, according to Woods, are ‘used when they want to be sure of a kill,’ particularly ‘when high-value targets are involved’.

The data shows the constantly shifting nature of the drone campaign, as the CIA and their targets adapt their tactics and behaviour in a game of cat-and-mouse. 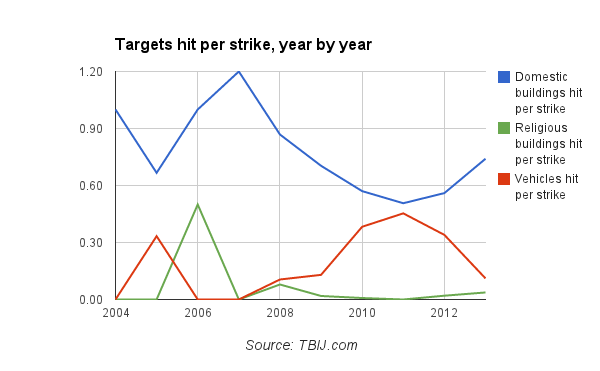 ‘When vehicles used by militants began to be targeted frequently, militants decreased their use of vehicles to avoid drone strikes,’ Mahsud says. ‘Now in many areas, militants travel on foot from one place to another.’

The Bureau has not recorded a similar change in Yemen where vehicles are the most common target. The US has been striking al Qaeda with drones since 2002 when it killed six alleged militants in a strike on a car.

The drone strikes on vehicles in Yemen do kill civilians. However, they are generally targeted when in sparsely populated areas, outside urban spaces. This appears to be a conscious effort to reduce collateral damage. In general the attacks in Yemen are reportedly less lethal for civilians. In Yemen on average one civilian is killed in every other strike whereas in Pakistan, on average more than one civilian is killed in each strike.

‘As we’ve seen in Yemen, the CIA is careful in what it chooses to target – for example the deliberate focussing on moving vehicles between towns to limit the potential for collateral damage,’ said Woods. ‘What is so shocking to think about in Pakistan is that the CIA has continued to target homes in villages even up until 2013.’

This article was also published in Vice News