The Bureau can reveal the billionaires, lobbyists and foreign interests who attended one of the most important private Conservative party fundraising events.

We have obtained a series of internal Conservative party documents including a seating plan for its Summer Party last year. The documents show that supporters with a combined wealth in excess of £11bn paid up to £12,000 a table to dine with cabinet ministers including the prime minister, home secretary and defence secretary as well as the secretaries of state for health, transport, culture and justice.

As Conservative donors gathered for this year’s event, which took place on Wednesday at the Hurlingham Club, west London, the Bureau established that at last year’s party there were six billionaires, 15 people with a personal wealth above £100m, 73 financiers and 47 retail and property tycoons among the 449 guests who dined at the private event held at Old Billingsgate Market.

Ministerial disclosure rules do not extend to party fundraising events or conferences, so until now those attending the event has remained a secret. Press were banned from the event and helpers were ‘absolutely forbidden’ from leaking details to the media the internal documents show.

Although there is no suggestion that any of the guests discussed policy or commercial issues with politicians, supporters, leading fundraisers and other guests were able to mingle with the prime minister and other senior government figures in a convivial environment. 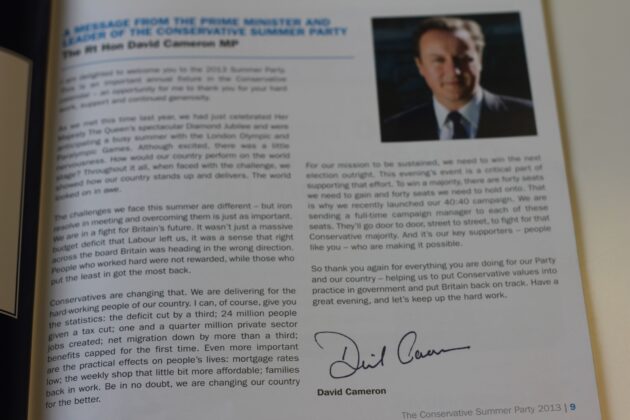 ‘Have a great evening, and let’s keep up the hard work’ – David Cameron’s welcome in the summer party brochure

The proximity of senior cabinet members to powerful business leaders and lobbyists has alarmed transparency campaigners leading to renewed calls for reform around the issues of disclosure.

‘There’s a real problem with big money in British politics,’ said Alexandra Runswick, Unlock Democracy director. ‘Whether it is party donors given seats in the House of Lords or people buying dinner with David Cameron, the public feels our politics is for sale – that politicians listen to donors and lobbyists but not voters.’

Tamasin Cave, director of lobbying campaign group, Spinwatch, said: ‘Buying a seat at a minister’s table provides these bankers, foreign businessmen and lobbyists with an opportunity to discuss their concerns, whether its taxes, regulation or policy. It’s a straight up case of cash-for-access.’

Labour’s big ticket fundraising dinner and auction this year takes place on July 9 at The Roundhouse in Camden, London. The £15,000 premier tables only includes a £7,000 donation meaning that under current rules, tickets to the event need not be disclosed.

Earlier this week, Len McCluskey, leader of Unite, confirmed the UK’s biggest union will heavily back Labour with cash in the forthcoming election campaign.

The Conservative summer party, titled, ‘40 [seats] to gain 40 to hold’, placed MPs in constituencies with slim majorities or prospective candidates on many tables.

The event was sponsored by Shore Capital, an AIM-listed West End-based boutique investment bank run by Howard Shore. Shore and his company have donated £499,330 to the Conservatives since 2006.

Shore and his wife, the chair of the organising committee for the event, hosted David and Samantha Cameron on their table. The investment bank also sponsored two other tables where energy minister Michael Fallon and home secretary Theresa May were seated. May shared a table with Lord De La Warr, non-executive director of Cluff Natural Resources which is exploring underground coal gasification in Warwickshire.

Asked why Shore Capital sponsored the party, the company said in a statement: ‘Shore Capital supported the event and made a financial contribution as they believe that the Conservative Party, led by the Prime Minister, are the best party to govern the country.’

Among the more surprising guests were a number of business men linked to Russia. These included Alexander Temerko and Andrei Borodin, who were sitting with London Mayor, Boris Johnson.

Also present was Vladamir Putin’s judo partner, Vasily Shestakov who was introduced to the Prime Minister. The Russian president’s key aide had been tasked with improving Russia’s reputation in the UK.

There were also 19 lobbyists and public relations specialists at the party representing Gulf states, fracking firms, oligarchs and banking giants.

Among these high profile PR specialists was Lord Clanwilliam whose firm represents the government of Bahrain. He headed one of the more prominent tables, hosting defence secretary Philip Hammond. Clanwilliam declined to comment on his attendance.

‘We do not go there to lobby ministers in any form,’ Henderson said. ‘We go there to support the party. Apart from shaking a hand I don’t believe I have ever spoken to a minister at any of these events.’

Henderson added that his colleague Patsy Baker was at the party ‘in a private capacity as the personal guest of her host. She didn’t raise any issues on behalf of Bell Pottinger or her clients.’

The finance sector formed the largest contingent at the event. In total, there were 73 hedge fund tycoons, private equity financiers and wealth managers. Among them were some of Mayfair and Belgravia’s most powerful hedge fund names led by heavyweight party donors Sir Michael Hintze of CQS and Andrew Law of Caxton — both former executives at Goldman Sachs.

Premier tables at last year’s party cost £1,000 per guest. Standard tables were charged at £400 per guest.

There is no precise way of knowing how much was raised from last year’s event. Political donations are only disclosed above a £7,500 threshold. But at fundraisers the value of the meal or prize is deducted. This means many donations may fall below the threshold and so will not be disclosed.

Since the June 24 event, guests have donated a disclosed £5m to the Conservatives.

On one table was a representatives of the little-known Tory dining club, United and Cecil. Since 2008, its members have donated £909,095 to the party through the club. Almost all these donations are made anonymously.

Spinwatch’s Tamasin Cave, said: ‘Our government has promised to be ‘the most transparent in the world’, yet David Cameron won’t even publish the names of his guests at these events, which is just one of countless donor dinners.’

How we did it

The table plan, auction catalogue and briefing notes for last year’s Conservative Summer Party were passed to the Bureau of Investigative Journalism. The event is one of two major fundraising occasions held by the party.

We researched the 449 guests on the list to establish their jobs, industrial sectors and wealth. We also established the political donations they made both as individuals and also through the companies with which they are linked by using disclosures made on the Electoral Commission website.

This allowed us to provide a breakdown of the donations that have been made to the Conservative party by the summer party guests since the Electoral Commission started publishing data. Where we have identified a donor, the infographic included in our coverage shows the value of individual donations and the combined total for individual and corporate donations.

If there was more than one director from the same company present at the Summer Party, we allocated donations to the individual with the most senior standing – for example, the chairman or chief executive – to avoid double counting.

We also included donations which individuals or companies made to ‘members associations’ of the Conservative Party. These are organisations linked to the party and overseen by the Electoral Commission. An example of this is the ‘Conservative Friends of India’, which was established to build links between the party, British Indians and India itself.

Some individuals in the room held senior positions in ‘unincorporated associations’. This includes dinner clubs such as the United & Cecil Club, a prominent Conservative donor. Where a senior member of these groups attended, the donations of these groups were included in ‘corporate donations’ linked to them.

It was not always possible to find information on the sectors in which people worked. In a small number of cases it was impossible to identify a named individual.

To assess wealth, the Bureau used three established datasets of wealthy individuals: the Sunday Times Rich List, Forbes Russia and Slovenia Times. This means our £11bn wealth figure is likely to be a low estimate of the wealth in the room.

The Bureau only published the names of attendees if there was a public interest in so doing.

The Guardian newspaper reported on the Bureau’s findings in this investigation.