With a theme of ‘40 [seats] to gain, 40 to hold’, last year’s Conservative Summer Party was a key fundraiser in the party’s drive towards the 2015 elections.

The Bureau has crunched the numbers to analyse who was there and what the event meant to the party’s coffers.

The money in the room

Between them the guests at the event were worth a conservative estimate of at least £11bn.

In terms of party funding, the guests at the party and the companies they represent have donated a disclosed £21.9m to the Conservatives since Electoral Commission records began in 2001. This is 10% of the £219m of disclosed donations to the party in the same period.

In the time following the June 24  2013 event to the present day, the guests have donated £5m to the Conservatives.

The most was given by Sir Michael Hintze, founder of hedge fund CQS, who has donated £1.5m since last summer.

In 2013 the Conservatives received £16.3m in declarable donations, of which £1.1m was in the week following the event.

The graph below shows how party funding spikes every year in June / July when the summer party occurs. The donations also peak in February, when the party holds its winter party, known as the ‘Black and White Party’ and in October, around the time of the party conference.

A graph showing the average donations reveals how the peak donations to the major parties all occur at around the same time. The large spike in donations in April is probably due to the huge leap in donations made to parties in the run-up to the general elections in 2005 and 2010, held in the first week of May.

The Bureau categorised the 449 guests into different professions and sectors where one could be identified. This revealed that guests from the finance sector outnumbered those from other business areas: 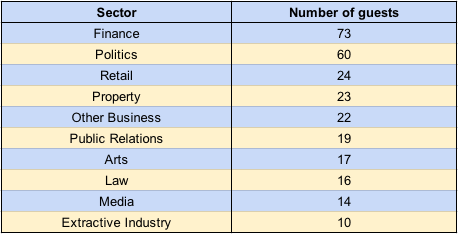 The Bureau identified 10 hedge fund staff and 12 lobbyists. The people in the ‘extractive industries’ – energy and mining – were split, with eight representatives of the energy sector and two from the mining industry.

The table plan, auction catalogue and briefing notes for last year’s Conservative Summer Party were passed to the Bureau of Investigative Journalism. The event is one of two major fundraising occasions held by the party.

We researched the 449 guests on the list to establish their jobs, industrial sectors and wealth. We also established the political donations they made both as individuals and also through the companies with which they are linked by using disclosures made on the Electoral Commission website.

This allowed us to provide a breakdown of the donations that have been made to the Conservative party by the guests at the summer party since the Electoral Commission started publishing data. The infographic included in our stories shows the the figures for individuals and the total for individual and corporate donors.

If there was more than one director from the same company present at the Summer Party, we allocated donations to the individual with the most senior standing – for example, the chairman or chief executive – to avoid double counting.

We also included donations which individuals or companies made to ‘members associations’ of the Conservative Party. These are organisations linked to the party and overseen by the Electoral Commission. An example of this is the ‘Conservative Friends of India’, which was established to build links between the party, British Indians and India itself.

Some individuals in the room held senior positions in ‘unincorporated associations’. This includes dinner clubs such as the United & Cecil Club, a prominent Conservative donor. Where a senior member of these groups attended, the donations of these groups were included in ‘corporate donations’ linked to them.

It was not always possible to find information on the sectors in which people worked. In a small number of cases it was impossible to identify a named individual.

To assess wealth, the Bureau used three established datasets of wealthy individuals: the Sunday Times Rich List, Forbes Russia and Slovenia Times. This means our £11bn wealth figure is likely to be a low estimate of the wealth in the room.

The Bureau only published the names of attendees if there was a public interest to do so.

The Guardian newspaper reported on the Bureau’s findings in this investigation.