The men and women who filed into the former fish market on June 24 2013 were impeccably dressed and smelled, if anything, of money. This was the summer Conservative fundraiser, an event attended by, among others, bankers, billionaires and landed gentry. It was a strictly private affair – no photographers or press were allowed into the venue and security was tight.

The event was sponsored by investment bank Shore Capital, which is chaired by big Tory donor Howard Shore. His wife Andree organised the event along with a group of other donors’ wives – as well as ‘Babylon’ series author Imogen Edwards-Jones, TV presenter Tania Bryer and George Prassas, partner of energy minister Greg Barker.

With drapes, elaborate floral centrepieces and graceful 20-something Conservative Central Office staffers in frocks and lounge suits, the organising committee created a scene of Gatsbyesque opulence.

With drapes, elaborate floral centrepieces and graceful 20-something Conservative Central Office staffers in frocks and lounge suits, the organising committee created a scene of Gatsbyesque opulence. 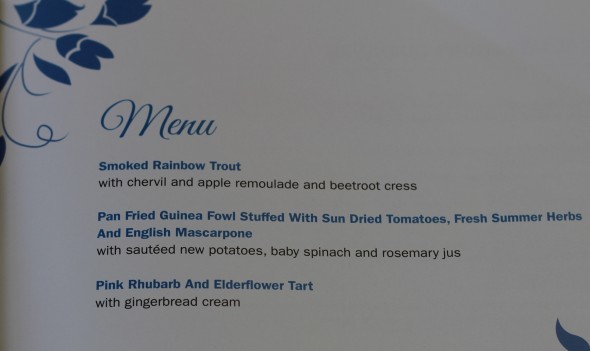 Guests were treated to smoked trout and pan fried guinea fowl (see menu page from brochure, left) before being given a chance to bid – via digital pads – at an auction,  conducted by a Christie’s director, for prizes ranging from the exotic (a gorilla safari in the Congo) to the more prosaic (Thatcher memorabilia and a tour of Thenford gardens with Lord Heseltine).

A £50-a ticket raffle was also held for two prizes: tickets to England v Australia rugby at Twickenham and a sequined-silvered Anya Hindmarch clutch bag.

Many of the guests were there to enjoy the general Tory bonhomie while supporting their favoured political party. But the event also provided an unrivalled opportunity to meet the prime minister and other key government ministers in a convivial and private setting.

Under disclosure rules, when a minister attends a reception or other large event in their official capacity this has to be disclosed. If they meet an individual on an official basis this too needs to be disclosed. But the rules do not extend to party fundraising events such as this one, even though a strong argument could be made that it is in the public interest that guests of such events be disclosed.

Some of the guests at Old Billingsgate last summer were well-known big donors to the Tory party but there were others whose presence was much less predictable.

It is hardly a surprise that the United & Cecil, a private club that raises funds for marginal constituencies by holding dinners with prominent Tories as speakers and whose president is David Cameron, had a large presence. Deputy chairman Christopher Fenwick, a member of the family behind Fenwicks department stores, hosted two tables.

Nor is it a surprise that City financiers featured prominently amongst the guests.

Hedge fund tycoons Sir Michael Hintze and Lord Fink hosted one table each, with the latter entertaining the likes of billionaire property developer Nicholas Candy and Lisa Tchenguiz, whose brothers and ex husband are super-rich donors.

There was a liberal smattering of Russians around the room, including three (apparently linked through the love of a little-known Russian martial art, Sambo) on the table of former Ulster Unionist MP turned PR man David Burnside.

There were also two Russians,  each facing fraud charges in their home country: ex-banker Andrei Borodin, who attended with model wife Tatiana Korsakova and Alexander Temerko, who reportedly snapped up a bust of David Cameron at the auction for £90,000.

Borodin has been granted asylum in the UK and Russia’s request to extradite Temerko was refused, on the grounds that the charges in both cases were politically motivated.

Boris Johnson was sitting on the same table as Ms Korsakova, alongside stylish art collector Anita Zabludowicz – another of the event’s organisers – and her husband Poju and son Roy.

Together with the oil-traders and oligarchs, bankers, luxury property developers, socialites and tycoons, there were those who exist to serve them: a couture dressmaker, haute jewellers, wealth managers aplenty, interior designers, hoteliers, a lawyer who specialises in helping the foreign super-rich emigrate to Britain, and numerous lobbyists and ‘reputation management’ consultants.

These included Lord Clanwilliam, adviser to Oracle Capital (which describes itself as a ‘one stop shop’ for the extremely wealthy) and PR man whose firm acts for the government of Bahrain.

There is no suggestion that anything in relation to his firm’s clients was discussed with the defence secretary or Conor Burns, an MP who is fervently supportive of Bahrain, who he hosted on his table.

Lord Clanwilliam was asked whether he represented Bahrain’s interests at the event, or  discussed any issues affecting any of his firm’s clients. He declined to comment, as did two of his other guests: oil trader John Hart – who joined Lord Clanwilliam in a London-to-Tashkent motorbike ride a few years ago – and the CEO of the Arab-British Chamber of Commerce.

We don’t know what was discussed at any of the tables, but we do know that ministers were among the seated guests.

Eric Pickles for instance was sitting at the same table as lapdancing club owner Peter Stringfellow, who like the Communities and Local Government secretary has an interest in planning. Mr Stringfellow believes the current rules on strip clubs amount to moral censorship, but there is no suggestion this was discussed.

Similarly, transport secretary Patrick Mcloughlin was sitting on a table hosted by shipping tycoon Constantine Logothetis.  Alongside him was Laurent Cadji, another major shipping fleet owner.

Currently the shipping industry is waging a last minute lobbying assault to delay new international rules to reduce the sulphur dioxide contained in fuel. Due to start next year, the reform will dramatically raise fleet owners’ costs. There is no suggestion that either Logothetis or Cadji discussed the issue with McLoughlin.

Wherever guests were sitting, most had the opportunity to greet the Prime Minister and other senior government figures, who ranged around the room during the evening, stopping at many tables.