A warehouse in a tiny Lithuanian village: the site of a CIA secret prison.

In one of Vilnius’s best known museums, over 50,000 visitors a year squeeze themselves into cells used by the KGB in the 1960s to hold dissidents and human rights activists. A few miles up the road, a more recently constructed prison is gaining similar international attention.

The windowless white warehouse about the size of an Olympic swimming pool was constructed in 2004. It soon became a topic of gossip among the 750 inhabitants of Antaviliai, a small hamlet ten miles north east of the Lithuanian capital and encircled by pine forest.

The workmen who built it worked mostly at night, using brand new equipment that was out of place among the tumbledown factory buildings, allotments and unpretentious Communist-era housing blocks. Villagers, who only agreed to interviews on the condition of anonymity, describe how English-speaking security guards had patrolled the perimeter of the site and vehicles with tinted windows shuttled up and down the forest road leading to the capital. According to one resident, a van from a Vilnius restaurant – often used at the time for government receptions – regularly delivered food to the building.

In the months that followed its construction the residents had tried to find out more, even holding a public meeting to try to elicit answers. But it was only years later as investigations by journalists, legal teams and NGOs started to throw light on a secretive imprisonment and interrogation programme run by the US Central Intelligence Agency that the villagers learnt how the building had been a key part of the CIA’s programme between 2004 and 2006.

But as details about the programme and the Lithuanian facility started to emerge officials went on the defensive, denying that Lithuania had any role in the prison network. The warehouse at Antaviliai “was not necessarily a jail”, officials from the Lithuanian prosecutor’s office told investigators from the Constitution Project – a US NGO – in 2012. It “could just as well have been meant to hold valuables”.

Now, lawyers for Mustafa al-Hawsawi – one of five men facing a military trial in Guantánamo Bay for allegedly planning the 9/11 attacks – have filed a case with Lithuanian prosecutors to demand more clarity about what went on in the site.

Al-Hawsawi’s lawyers – the London-based anti-torture NGO Redress – say it was in this building that their client was illegally detained until lack of available medical facilities forced the CIA to move him.

The Lithuanian parliament and prosecutors’ office have already carried out two inconclusive inquiries into what happened in Antaviliai. Allegations of a covert CIA prison go back to an ABC news report in 2009. But international pressure is now building on the Baltic state following the release of a US Senate report in December 2014.

The declassified report – made public only after a long struggle between its authors on the Senate’s intelligence committee, the CIA and the Obama administration – gave a chilling insight into how the CIA planned and carried out its detention operations with the help of numerous foreign partners. It provided fresh details of the torture techniques used in the programme, while questioning whether any useful intelligence emerged as a result of them.

The report also provided further evidence that the CIA held prisoners in Lithuania, as well as in neighbouring Poland and Romania. No country names are given in the report, but research into transfer dates and flight paths correlates Lithuania with the CIA prison site nicknamed “Violet” by Senate investigators.

Following the publication of the report, Lithuanian prosecutors agreed to widen the scope of an inquiry reluctantly launched in 2014 in response to a legal complaint from Redress the previous year. No results from their work have yet been forthcoming, but al-Hawsawi’s lawyers are hoping that they might finally gain access to the prosecutors’ findings.

“Redress has been seeking justice in Lithuania on Mr. Al-Hawsawi’s behalf for two years now and is disappointed at the lack of tangible progress and the Lithuanian government’s failure to adequately address the serious human rights violations which took place on their soil,” said Carla Ferstman, the organisation’s director.

“Long before we submitted our complaint in 2013 the Lithuanian government was aware that the CIA had used its territory as part of the global torture programme, but failed to conduct an adequate investigation and to hold those responsible to account.”

The 500-page published summary of the Senate report depicts a programme under pressure from many sides, struggling with internal and external criticism and lurching from crisis to crisis as policy makers tried to decide what to do with it and how to dispose of the prisoners it had accumulated.


If a US government plan for long-term detainee disposition does not emerge soon, the handful of liaison partners who cooperate may ask us to close down our facilities on their territory” – talking points for CIA Director Porter Goss, 2005

By the time the CIA opened site Violet, in early 2005, tensions with states which had agreed to house their secret detention locations, or to detain CIA prisoners covertly in their own facilities, were already frequent, according to the Senate report. The existence of the secret sites, and of the transport network which moved prisoners between them – mostly via specially contracted business jets – was becoming exposed. Officials disagreed internally about the use of torture and the intelligence value of their prisoners. And pressure from the International Committee of the Red Cross, mandated to ensure humane treatment of prisoners of war, had already compelled the Agency to hand over 18 of its detainees to the US military in Bagram, Afghanistan.

Although the majority of prisoners on the CIA’s books were kept in a variety of locations in Afghanistan, those whom the Agency considered particularly important were distributed through a frequently-changing array of sites in Thailand, Poland, Romania, Lithuania and Guantánamo Bay, which the Senate report refers to as Green, Blue, Black, Violet, Indigo and Maroon.

The sensitivities surrounding which states assisted in the secret prison effort are such that even in its initial, uncensored form, as presented to Senate intelligence committee members, names were left out of the report, and countries were identified by unique letters.

These identification codes were then themselves redacted before the Obama administration agreed to the publication of the report summary.

Why such countries, with little direct relation to the “war on terror”, agreed to the risks of taking part in the CIA’s highly controversial secret operation has long perplexed observers. The Senate report indicates that large sums of money changed hands as the CIA demonstrated its “appreciation” for the cooperation of its foreign partners. But the report also shows how alive these partners were to the risks of exposure – risks which are now becoming a reality.

As the CIA was moving prisoners into “site Violet” in 2005, high level officials were becoming increasingly concerned by the possible outcomes. A briefing for the CIA director, Porter Goss, noted that “a combination of press leaks, international scrutiny of alleged [U.S. government] detainee abuse, and the perception that [U.S. government] policy on detainees lacks direction is eroding our partners’ trust in U.S. resolve to protect their identities and supporting roles. If a [U.S. government] plan for long-term [detainee] disposition does not emerge soon, the handful of liaison partners who cooperate may ask us to close down our facilities on their territory.”


“It could just as well have been meant to hold valuables” – Irmantas Mikelionis, Lithuanian Prosecutor’s Office

The CIA’s involvement in Lithuania grew as the secret detention programme itself expanded. Referring to the country in which site Violet was established, the Senate report notes that “by mid-2003 the CIA had concluded that its completed, but still unused ‘holding cell’ in Country [redacted] was insufficient, given the growing number of CIA detainees in the program and the CIA’s interest in interrogating multiple detainees at the same detention site. The CIA thus sought to build a new, expanded detention facility in the country. The CIA also offered $[redacted] million to the [redacted] to ‘show appreciation’ for the [redacted] support for the program.”

Although “the plan to construct the expanded facility was approved by the [redacted] of Country [redacted]”, the CIA and partners – whose names are hidden in the published report – “developed complex mechanisms” to funnel the money to its recipients.

The report states that detention site Violet “opened in early 2005” and was closed in 2006 owing to problems with the provision of medical care at the site.

The CNSD found that Project No. 1 was “not used for the purposes of holding detainees”, while Project No. 2 was insufficiently monitored by the Lithuanian security services, with the result that “the layout of the building, its enclosed nature and protection of the perimeter as well as fragmented presence of the SSD staff in the premises allowed for the performance of actions by officers of the partners [the CIA] without the control of the SSD and use of the infrastructure at their discretion.”

On the basis of the CNSD’s findings, the Lithuanian prosecutor’s office launched an investigation in January 2010. It was closed down a year later, however, with the prosecutor stating that “no deed has been done which has indications of a criminal offence”.

Few details of the 2010 investigation are available, since the prosecutor determined that most of the material gathered was classified. Officials questioned airport staff, border guards and members of the SSD, as well as carrying out brief site visits to the buildings of the two “projects”. But the prosecutor found that witnesses “either categorically denied” that people were brought into and out of the country on the CIA-chartered jets, or “stated that they did not have any information” about it.

The prosecutor concluded that the use of the aircraft to transport prisoners was “a hypothesis which is not supported by factual evidence”, and stated that “the real purpose of [Project No. 2] may not be revealed as it constitutes a state secret.”

In October 2011, lawyers for Abu Zubaydah – the first prisoner to enter the CIA’s detention programme – filed a case at the European Court of Human Rights against Lithuania, stating that he had been transferred to “Project No. 2” in early 2005. Abu Zubaydah was believed at the time of his capture in 2002 to be a high level al-Qaeda operative, but as the Senate report makes clear, this information was determined to be unreliable soon afterwards.

In response to this case, lawyers for the Lithuanian government have argued that CIA-contracted planes which landed in Lithuania in 2005 and 2006 were merely performing “technical stops” – in other words, that no persons or cargo were unloaded from or loaded onto the planes.

Meanwhile, al-Hawsawi’s lawyers first asked the prosecutor to investigate whether he was held in Lithuania two years ago, in September 2013. When the prosecutor refused, they went to court and a judgement in early 2014 overturned his decision.

The new investigation has remained opaque, however. A previous request by al-Hawsawi’s lawyers to have access to it was turned down earlier this year as the prosecutor argued that there were “no grounds to recognise Mustafa al Hawsawi as a victim” in the proceedings.

As each case progresses slowly through the courts, such contradictions between government accounts and the mass of evidence building up in the public domain become all the more stark. One day the inhabitants of Antaviliai might have a clear picture of what went on inside the mysterious white warehouse. But whether this picture will be accompanied by any concrete government actions to prevent the re-emergence of disappearance and secret detention in Europe remains a question of fragile political will as much as legal oversight. 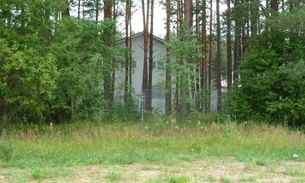