Last year, an anonymously-produced map started to make its way around German social media. It claimed to show viewers the spread of “refugee and migrant crime” throughout Germany.

Unlike some of the lurid tales of migrant depravity that have circulated in Germany in recent months and turned out to be false, the interactive map seemed professionally put together. Each pin on it correlated to a police or media report of a crime ("we don't document cases simply on the basis of hearsay", its makers claimed).

The map, called XY-Einzelfall (a sarcastic riposte to the idea each migrant crime is simply an ‘isolated case’ – Einzelfall in German) was viewed more than four million times.

One of the XY-Einzelfall (XYE) social media followers tweeted over 80 times as new crimes were added to the map: "The time's coming when Germans will need to carry guns for self-protection."

But analysis of the map's methodology by the Bureau of Investigative Journalism shows that it is systematically misleading, often attributing crimes to migrants or refugees on the basis of nothing more than a witness statement that the perpetrator was "dark-skinned" or “southern”. On top of this, the project vastly overstates the figures on migrant crime through skewed use of statistics.

Tracing the map's presence on social media also shows it to be far from politically neutral. An account in XYE’s name on the Russian social media site VKontakte is rife with the kind of pro-Trump pro-Putin memes which have become the signature of the global alt-right.  These are also the dominant affiliations of the Twitter accounts promoting the map. Overtly racist and xenophobic memes are also commonplace.

Facebook is supposed to be cracking down on fake news in Germany, amid fears that the kind of misinformation seen in the US may play a role in this year's federal elections. One sensational story about New Year’s Eve attacks by migrants in Frankfurt was published by the newspaper Bild and picked up by the Daily Express and Daily Telegraph before Bild apologised for publishing a fake story.

"The time's coming when Germans will need to carry guns for self-protection."

That story also appeared on the map, before being taken down. But unlike fabricated stories which can be easily fact-checked, the refugee crime map’s main business is slick distortion of reality, which is much harder to track. In the more strictly policed media environment of Germany, 'fake news' has apparently taken on more sophisticated forms.

"These cases are more problematic than outright 'fake news,'" says Jonas Kaiser, an expert on German media at Harvard University’s Berkman Klein Center. "I think these cases are going to rise."

The XYE map first emerged following reports that migrant men had committed mass sexual assaults during Cologne's New Year's Eve celebrations. Opponents of Chancellor Angela Merkel were quick to link the assaults to her decision to accept the million-odd asylum seekers who came to Germany in 2015. The media's initial slowness in reporting the New Year's Eve attacks fuelled suspicions of a conspiracy of silence around the issue.

The map gained momentum. By the end of the year you could hardly see Germany for the forest of pins.

XYE was brought to the mainstream media's attention by a blog in the Frankfurter Allegemeine Zeitung, and later cited in the British tabloid Daily Express ("MERKEL'S SHAME: Map reveals shocking extent of migrant sex attacks on women and children”).

It was also picked up by the Trump-affiliated news site Breitbart, which accused Facebook of stealthily interfering to stop the map showing up in users’ news feeds after they had liked it.

The map visualises 8,800 separate incidents from 2016 - while asserting this is “only a fraction of migrant/refugee crime cases" in that year.

The crimes represented on the map are outlined in brief summaries and sourced to a mixture of police and media reports.

The map's makers have chosen not to be identified, citing fear of left-wing reprisals. But one of them gave an interview under a pseudonym to the far-right publication Junge Freiheit in April. She said XYE was run by four women and a man.

"We don't read between the lines - there must be a clear reference to the perpetrator's background in the source material", she said. The Bureau's analysis however shows the map’s portrait of a migrant crime epidemic rests on highly dubious assumptions about the perpetrators’ origins.

The map's creators like to portray their approach as scientific, mimicking the language of academics and think tanks. In January they released a "7-day analysis of published police reports", with a breakdown of crimes by groups of different origins and a headline suggesting that 84% of crimes were committed by migrants.

In fact, the 84% figure is completely misleading. The map makers have stripped out all crimes in which the perpetrators' background is not mentioned from their calculation.  The true percentage of crimes in this period committed by migrants – according to XYE’s own data – is 13%.  There is a further 13% of crimes which the XYE say are ‘probably’ committed by migrants.

We looked at how XYE decide that each pin on the map represents a crime which could have been committed by migrants. They comb police and media reports and pull out descriptions of perpetrators. We found that almost two-thirds of their reported offenders fell into the categories of "dark-skinned", "southern-looking", "foreigner" or "refugee".

We then selected a random sample of 100 reports within each of these four categories for closer analysis. We found that in nearly all cases where the perpetrator was described as "dark-skinned" or "southern", there was no evidence in the sources positively identifying them as a migrant or refugee. This was also true of the overwhelming majority of cases where the offender was described as a "foreigner". In the summaries where the perpetrator is explicitly described as a "refugee", there is usually evidence supporting this claim. But even these don’t support the idea of a migrant crime wave against Germans. In more than a third of the hundred sample cases in this category that the Bureau analysed, the ‘crimes’ consisted of fights or other incidents within Germany’s overcrowded asylum centres.

One of the cases in this category was a disturbed 17-year-old Afghan boy who was considered at risk of suicide after he tried to throw himself out of a window.

Another involved a fire alarm going off in a refugee hostel due to someone smoking. There was no damage or injuries.

In at least one case represented on the map as a refugee crime, the asylum seeker was actually the victim of the attack, not the perpetrator.

For a start, Ashby explained, it would make more sense to base the data on people who had actually been charged with a crime, because eye-witnesses are notoriously unreliable.

"I've taken a huge number of statements from victims or witnesses - sometimes they'll get it wrong in terms of whether someone was black or white," he said. "If it's just based on a witness description you can't make any meaningful statement about who committed that crime."

His concerns were echoed by Dr Theo Kindynis, a criminologist at the University of Roehampton, London, who has researched the history of crime mapping.  Kindynis told the Bureau that there were “some very basic, fundamental, epistemological and methodological issues” with the map, citing for example its reliance on media reports.

“Even if the data on which the map was based was accurate, it makes little sense without other data with which to contextualise it. For instance, what proportion of overall crimes do these account for? How do the crimes committed by refugees or migrants compare (proportionally) with those committed by native or citizen residents of a given area? Without that context, the data is useless at best."

VKontakte is not subject to the kind of content controls that Facebook has agreed to deploy in Germany, and it shows. XYE’s profile page on VKontakte is populated with pro-Putin and pro-Trump memes, jokey riffs on the Third Reich and extremely racist or Islamophobic images, such as depictions of chancellor Angela Merkel as a gap-toothed black man or a radical Muslim.

It is not clear whether XYE was set up by Merkel's political opponents as a propaganda tool, or whether it reflects the work of motivated individual citizens. In the age of social media those distinctions are starting to blur. Online supporters of US president Donald Trump coordinated their efforts to push his agenda in the run-up to the election. These supporters are now increasingly interested in Germany. Trump himself has said that Merkel's immigration policy was a "disaster" that caused German crime to rise to "levels that no-one thought they would ever, ever see," and has asked his administration to start compiling a list of crimes by migrants in America.

Some of his supporters see a mirror of Trump's populist insurgency in the anti-immigrant party Alternative für Deutschland (AfD), which is hoping to gain seats in the German parliamentary elections this fall. The internet forum Reddit, which Trump supporters used as a platform in the US election, now has a "Make Germany Great Again" section in support of the AfD.

Twitter is far less influential in Germany than it is in the US, but there are signs of an online network coalescing around the AfD's anti-immigrant message and XYE's map.

The Bureau analysed activity around XYE’s Twitter account over 10 days in January 2017. Just 10 followers were responsible for more than a quarter of the account's 15,000 retweets during this period.

Among these ten accounts, only one name was more prominent in their tweets than their adversary Angela Merkel, and that was Donald Trump.

Some of their most popular hashtags over this ten-day period, aside from references to the AfD, were “Trump”, “Fakenews?” and “MerkelMussWeg” [Merkel Must Go].

The local branch of the AfD in the town of Dreieich in Hessen has a banner on its home page alerting people to the XYE map, as an example of  "what is being withheld from citizens".

Although the map has been circulated mainly within the right-wing world, it and others like it have the potential to play an important role in the migration debate in Germany.

Harvard's Jonas Kaiser argues that such seemingly scientific material helps legitimise an anti-immigrant political position. Things like the XYE map "tighten the right wing's identity," Kaiser says. Fake news may not have an impact on the German election, but unreliable maps could. 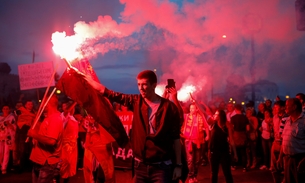 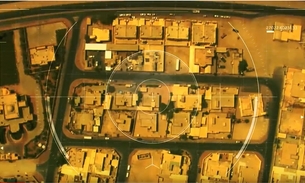