"Disappointing", "stage-managed" and "three minutes of nothing" - this is how local journalists across the country have described access to Theresa May and Jeremy Corbyn in the run up to June 8.

The Labour leader has done fewer interviews with regional papers but his Conservative rival has been less forthcoming, research into local newspaper reporters' access to party leaders during the general election campaign has found.

Bureau Local, part of the Bureau of Investigative Journalism, has analysed more than 80 visits by all the party leaders to constituencies across the country since May 3, speaking to nearly 60 journalists in the process.

Our study has found the Labour and Conservative leaders differ significantly in their approaches – but both have restricted opportunities to be scrutinised by local reporters.

The Labour leader has not done a sit down interview with a local newspaper during the campaign, despite May having done six.

Instead he has favoured meeting the public during rallies and visits - but more than half of the reporters covering those events have been unable to question him.

Veteran journalist Martin Shipton, who has been covering elections since 1979, has attended visits by May and Corbyn as chief reporter of the Western Mail. He says this year’s campaign has been more stage-managed than ever.

“Whatever your political views there is undoubtedly a huge contrast to the way in which the leaders are approaching the election in terms of accessibility to journalists,” he said.

“May’s visit was stage-managed to the point where only handpicked journalists have access and, even then, they want to pre-approve the questions.

“Corbyn was open to being interviewed by anyone. All sorts of outlets turned up and he was happy to talk to all of them.”

Last month Jeremy Corbyn also gave his support to Local Newspaper Week, describing the local press as “central to our democracy” and “a glue that binds communities”.

“I complained afterwards and the press office said ‘Yeah, that’s sh**, sorry’ and I’ve heard nothing since”

However, he has only spoken at length to one local newspaper, in Shropshire, (where he once worked as a reporter) and that interview took place before the formal start of the election campaign.

That may be explained in part by his style but where reporters have followed him on the campaign trail, they too have struggled for access.

Analysis of 22 times a paper has sent one of its staff to cover a visit or event held by Corbyn since May 3 found they were unable to ask him a question on 13 of those occasions.

A northern reporter told Bureau Local she covered four separate visits by Corbyn to her patch in one day but did not get to ask him a single question.

“I complained afterwards and the press office said ‘Yeah, that’s sh**, sorry’ and I’ve heard nothing since,” she said.

A reporter on The Wokingham Paper requested an interview with Jeremy Corbyn ahead of a visit to Reading but was turned down so they didn’t send anyone to the event.

“No interview time means nothing of interest to my readers,” he said.

“I had to prioritise getting the paper out rather than chasing shadows.”

Peterborough Telegraph reporter Joel Lamy attended a rally at the local football club’s stadium, where the Labour leader was due to speak to supporters, only to be told he would not be allowed to ask him any questions.

“A press officer told me Corbyn was only speaking to regional broadcasters, so I stood at the back doing Facebook Live”. A reporter in Huddersfield attended a Corbyn rally but was also denied the opportunity to interview him. He told Bureau Local: “I did get to stand pretty close to him to record what he was saying but not being able to speak to him one-to-one was disappointing.”

Local reporters were also disappointed with what they got out of Theresa May despite her claim that she was looking forward to being “scrutinised, challenged and reported on by a vibrant and vital local press”.

She has given six pre-arranged one-to-one interviews with local papers so far since May 3 but Bureau Local has found her interaction with local journalists has included a requirement that questions should be submitted in advance, and restrictions in the ways in which she is interviewed, such as preventing interviews being filmed.

Our investigation was prompted by the Prime Minister’s visit to Cornwall on May 2, during which local journalists were barred from filming her at a business in St Ives.

Jacqui Merrington, digital editor of Cornwall Live, told Press Gazette her reporters were “shut in a room” for the duration of her visit and told they could only ask two questions of May, who did televised interviews with the BBC and ITV, at the end of the trip.

Since then we have recorded 16 events or visits held as part of her campaign which involved a local reporter being allowed to ask her at least one question. The other five events were not covered by the local press.

Six of the visits involved May doing exclusive, one-to-one interviews with local papers: Brighton Argus, the Eastern Daily Press, the Southern Daily Echo, the Eastbourne Herald, the Express and Star (which has now given her an official endorsement) and her local paper, the Maidenhead Advertiser.

Each of these interviews has led to favourable headlines, including in strongly Pro-EU Brighton where the headline read: “Brexit will be good for Brighton and Hove”.

The reporter who did the interview described to Bureau Local how he was asked to submit questions in advance ahead of a 12-minute chat.

“She did not really engage with the questions asked of her and just replied with the answers you would expect her to,” he said.

“I found when I came to write it up that despite giving her some pretty tough questions, we didn’t really have much to go with and took a bit of a kicking from social media for doing her PR for her.”

Chris Yandell had an almost identical experience when he interviewed Theresa May for the Southampton Daily Echo on May 11. He was also given ten minutes with the Prime Minister but did not have to submit questions beforehand. “She was typical Theresa May – very pleasant, very courteous but didn’t answer any of the questions,” he said.

“She just talked in generalities and trotted out the same old stuff she always comes out with in terms of strong and stable leadership.”

Despite avoiding the questions, May still left Southampton with a favourable headline.

Eastbourne Herald reporter Annemarie Field claims she was stopped from filming an interview with May despite her office initially agreeing.

She told Bureau Local: “It’s always a bloody balls-up with them. One minute they say you can video her. Then, on the day, it’s ‘No, we never agreed to that’.”

Sam Blackledge, chief reporter of the Plymouth Herald, tried to pin the Prime Minister down on local issues during a brief interview at a fish market on May 31. He was given generic responses to each of his four questions, three of which began: “I’m very clear that…”

Blackledge’s account of ‘three minutes of nothing’ with the Prime Minister went on to make national news.

The Prime Minister has also given specific one-to-one interviews with the Yorkshire Post, Birmingham Mail, Plymouth Herald, and Dundee’s Sunday Post before the dissolution of parliament. These interviews fell outside the period covered by our study.

"We had the chance for a couple of questions each before he was whisked off. There were no restrictions and no horror stories about being locked in a side room"

Although Corbyn did not do pre-arranged interviews with regional press those reporters who did get to speak with him were happy with what they got. Worcester News reporter Tom Edwards was among regional journalists given interview time with the Islington North MP.

He said: “We had the chance for a couple of questions each before he was whisked off. There were no restrictions and no horror stories about being locked in a side room like May’s people have done.”

Dan Martin of the Leicester Mercury was impressed with his candour after speaking to Corbyn during a campaign event on May 6.

“Corbyn set aside five to ten minutes to have a quick chat,” he said.

“He handled it well and didn’t duck any questions.”

Corbyn is also popular with his local newspaper editor, Ramzy Alwakeel from the Islington Gazette: “I’ve been really impressed with how much time he makes for us.”

“He’s been difficult to get hold of over the last few weeks, perhaps unsurprisingly, but I can’t fault him.”

A Labour spokesperson said the party “recognises the important role of the regional press”, which had been reflected in “many one-to-one interviews” with local journalists “all over the country” during the campaign.

The Conservative Party declined to officially comment but a source from within the Prime Minister’s press team denied reporters had been asked to pre-submit questions.

Headline image: Jeremy Corbyn speaking to the media outside the Institute of Engineering in London (Yui Mok/PA Wire/PA Images) 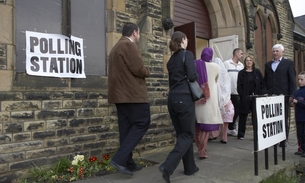