The clues to President Trump’s announcement that he would be escalating the war in Afghanistan rather than winding it down were written in the data.

The US Air Force has dropped 1,984 missiles and bombs in Afghanistan in 2017, according to the latest figures, nearly three times the number it had released at the same time last year.

The Bureau of Investigative Journalism has been tracking US military activity in Afghanistan since 2015. The numbers paint a stark picture of an entrenched and multifaceted conflict that has refused to comply with the hopes of the White House.

Early on there had been whispers that the President's instinct was to pull out of Afghanistan but after the announcement officials briefed that up to 4,000 more US soldiers would now be sent there. 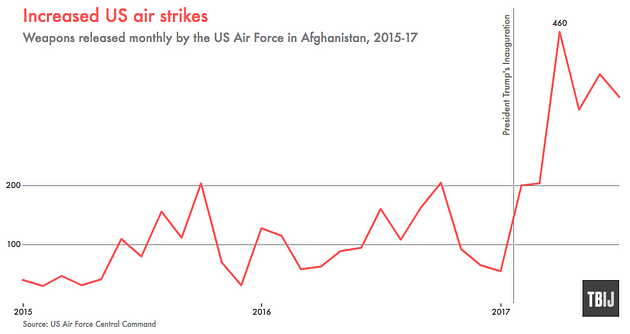 His predecessor, Barack Obama, had also hoped to wind down America’s longest running war declaring combat operations to be officially over at the end of 2014. Only a rump training and advisory force was to remain in the country, together with an even smaller Special Operations presence focusing on counter-terrorism. The plan was to reduce these numbers even further in 2016. The use of airpower was to be primarily defensive and the number of airstrikes plummeted in 2015.

But in 2016 as the Taliban made gains US airstrikes shot up by more than 40%. The increased tempo of air operations that year was accompanied by a near doubling of the civilian casualties caused by US and Afghan airstrikes, according to the UN.

In the summer of 2016, the situation on the ground was judged to be so critical that the Obama administration changed the rules again so that US aircraft were allowed to proactively go after the Taliban and other militants. Most strikes in Afghanistan now fall into this category.

Afghan security forces seem simply not to be strong enough to keep a resurgent Taliban at bay without support, in spite of more than $70 billion worth of US spending.

Systemic corruption has been a big part of the problem, especially the issue of so-called 'ghost' soldiers, personnel who are on the payroll but do not really exist. As a Bureau investigation earlier this year found, the people who actually do take part in the defence of provinces like Helmand are often a rag-tag army of the opportunistic, the desperate, and in some cases the limbless.

It is not just the Taliban drawing America deeper into Afghanistan- as Trump noted, there around 20 militant groups operating in the area, including the local franchise of the Islamic State group.  The US expanded its counterterrorism campaign to take on Islamic State in Afghanistan in January 2016.

No ordinance has been spared, including the deployment of the largest conventional bomb ever dropped.  Bureau research shows that of the 358 strikes which hit Afghanistan in July, nearly half landed in Nangarhar, the eastern province where IS has their stronghold.

And yet the latest estimates from US officials show that after all these months of fighting, Islamic State’s numbers in Afghanistan remain at around 1,000 not much less than this time last year.

The cost of this ongoing conflict – which is unlikely to be brought to a decisive conclusion by the policies announced by Trump last night – are borne by the civilian population.

UN figures show a steadily climbing number of civilian casualties in recent years.  Anti-government militant groups are by far the leading cause of civilian harm, with IEDs and suicide bombs alone accounting for 40% of the 5,243 civilian deaths and injuries in the first half of 2017, the UN’s latest report said.

The wild card in what happens next is how much pressure Trump brings to bear on Pakistan, whose porous border with Afghanistan has been of great use to militant networks targeting Kabul.

In his speech on Monday night, Trump said he would “no longer be silent about Pakistan’s safe haven for terrorist organisations.”

The Bureau has recorded four US drone strikes in Pakistan since Trump took office, raising the possibility of a revival of the covert campaign which at its height resulted in scores of civilian deaths each year but which had slowed down to just three strikes in the whole of 2016.