MEPs called for fresh action to tackle the rising tide of superbugs today, amid criticisms that the plans will not attempt to control the public health threat posed by drug manufacturers leaking antibiotics into the environment.

The European Parliament recommended stricter rules to curb unnecessary use of antibiotics in human health and animal husbandry, to help thwart the rising tide of resistant bacteria.

Antibiotic resistance is considered one of the gravest threats to public health as it can make bacterial infections near impossible to treat. Resistant infections already kill an estimated 700,000 people worldwide, a figure that’s expected to rise to 10m by 2050, if no action is taken.

The report, adopted in European Parliament today by 589 votes to 12, recommends the EU Commission and member states take firm action against sales of antibiotics without a prescription. Sales by doctors, vets and other health professionals should also be restricted and any incentives for prescribing antibiotics removed, MEPs say.

Better monitoring of resistance rates in EU countries is also needed, said MEP Karin Kadenbach, who has led on the new plans, so it’s possible “to measure progress in the fight against antimicrobial resistance.”

The actions laid out in the strategy aren’t legally binding but can be used to set EU-wide guidelines on antibiotic use and resistance, and indicate to the Commission that there’s a political appetite to act. 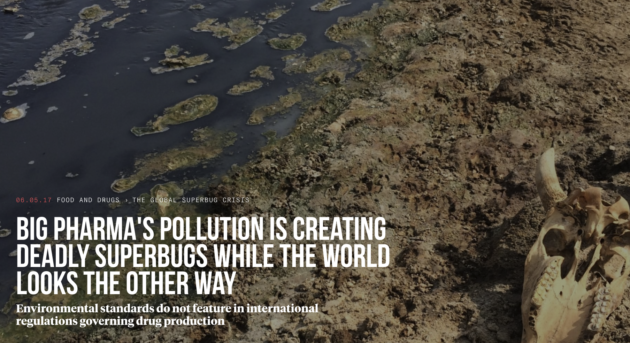 But the plans have been criticised for not doing enough to stop antibiotic manufacturers polluting the environment, which can also lead to resistance. Most of the world’s antibiotics are made in India or China where environmental regulation is weaker. Bacteria surrounding these factories can be exposed to antibiotics, encouraging resistance to develop.

Last year, a Bureau investigation found “excessively high” levels of antibiotics in water sources around production facilities in India that supply the NHS with drugs. Global authorities like the Food and Drug Administration and the European Medicines Agency strictly regulate drug supply chains in terms of drug safety, but environmental standards do not feature in their rulebook.

Only eight of the 18 pharmaceutical companies surveyed by not-for-profit watchdog Access to Medicines earlier this year set limits on how much antibiotic residue can leak from production facilities. All refused to disclose the exact amount they discharge.

Earlier EU plans had indicated new measures to tackle this problem. They proposed limits on pharmaceutical discharges into the environment for drug firms that supply the European market. But these plans were later scrapped, according to documents leaked to the Guardian.

MEP Laima Andrikiene said “the European Commission should be held responsible for the worsening AMR situation in India,” as she urged other members to take up this issue at an event held at the European Parliament in Strasbourg on Tuesday.

Historically, the EU has been quick to respond to the threat of antibiotic resistance, implementing its first action plan in 2001. However, no EU plans have addressed the problem of manufacturers leaking antibiotics into the environment.

India bans use of "last hope" antibiotic on farms