Who is collecting £200 and who is passing go?

With the countdown on to the release of the spring Budget the message coming out of the Cabinet Office is very much that when it comes to tax ‘we’re all in it together.’

Over the past weeks Treasury officials have used almost any opportunity to promote the idea that they will be cracking down on tax avoidance. However, while they fly the flag of commonality, MPs must also look at their own tax affairs.

The Bureau has cast its eyes over the financial situations of our elected leaders and has come up with several questions about MPs’ taxes.

Family trusts
There are at least two MPs who hold property through family trusts.

Richard Benyon, the MP for Newbury, is well known for his family’s wealth. The Conservative politician owns a 20,000 acre estate in Berkshire, reported to be worth £125 million. Land Registry records show the property is owned by Englefield Estate Trust Corporation Limited. Benyon has registered this as a financial interest in parliamentary records.


[The Lib Dems] are envious of people who own large houses. But how convenient for Nick Clegg that the original £1million threshold has been increased to £2million. That puts the Lib Dem leader in the clear but leaves many other people facing an unnecessary new tax bill.
Peter Bone, Conservative MP

Holding property through a family trust can facilitate the avoidance of Inheritance Tax, which is levied at 40% on properties more than £325,000. There is no suggestion this is Benyon’s motivation for holding property in such a way, but it does raise interesting questions as to why the Englefield Estate Trust holds his property. When asked about tax on the trust Mr Benyon refused to comment, telling the Bureau that he did not discuss family matters.

Dunne’s registered interests state ‘Land and property in Herefordshire, some held in trust for life, from which rental income is received.’ Despite several emails to Mr Dunne the Bureau did not receive a reply to questions about the tax he pays on the property.

Goldsmith owns a multimillion pound property in Richmond, Surrey. The house, valued in 2007 at £7,750,000, was bought through the Holmead Investments Limited company, an organisation incorporated in the Cayman Islands. There is no direct taxation imposed on residents or Cayman Islands companies.

A spokesperson for Mr Goldsmith said, ‘The Old Vicarage is not registered as Zac’s primary residence as he does not live there. Full stamp duty was paid on it at the time of purchase.’

The Bureau spoke to several tax experts who told us that for those with expensive properties and the money to buy the right advice, there are several methods that can be used to avoid taxation. 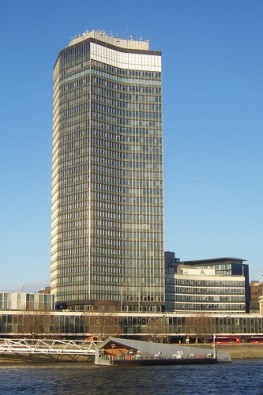 One such property is Millbank Tower, home of Conservative Party headquarters.

The title deeds of Millbank Tower show the property, bought for £37 million in 2002, is owned by Basio Holding Ltd, a company registered in the British Virgin Islands, a notorious tax haven.

Basio Holdings is owned by TST Millbank LLC, a company incorporated in the US state of Delaware, another opaque fiscal jurisdiction. Following the chain, the Bureau found TST Millbank is in turn a wholly owned subsidiary of Aldergate Investments Ltd, a company owned by David and Simon Reuben.

The fact that Millbank Tower is owned by an overseas company means that the Rebuen Brothers would be eligible for the HMRC’s Non-Resident Landlord Scheme.

The scheme allows non-resident landlords to apply to HMRC for exemption from paying tax on the income they receive through the rental of their properties. This is a completely legal scheme that, if allowed, is signed off by the HMRC, however it is yet another tool in a bag of tricks for avoiding paying taxes.

What is more, by buying Millbank Tower through a BVI registered, offshore company, the Reuben Brothers could have avoided paying stamp duty on the property. In 2002, when it was purchased, this would have been 4%, (it has since been raised to 5% for properties over £1 million.) This means stamp duty would have been levied at £1,480,000.

There is no evidence that the Reuben Brothers have actually employed any of these avoidance techniques. A spokesperson for the Reuben Brothers told the Bureau, ‘For Millbank Tower, full tax returns are filed annually with HMRC and any relevant taxes are duly paid to HMRC.’

HMRC refused to comment on the situation stating they do not discuss individual tax matters.

But with the Tories speaking out about offshore companies avoiding property tax it seems poignant that their own HQ is housed in one such building.

Mansion tax
When it comes to the spring Budget a major issue for the Liberal Democrats is the introduction of a mansion tax. Despite long-term resistance from his Conservative colleagues Nick Clegg has refused to let the issue go, arguing that properties worth over £2million should be taxed.

The proposed tax was had originally been aimed at properties over £1m but was later doubled.

MP Peter Bone recently spoke out about the changes, pointing out that Clegg’s £1.5m London home would now be exempt from the tax.

‘This shows the true face of the Lib Dems,’ said Mr Bone. ‘They are envious of people who own large houses. But how convenient for Nick Clegg that the original £1million threshold has been increased to £2million. That puts the Lib Dem leader in the clear but leaves many other people facing an unnecessary new tax bill.’

Several other prominent Ministers own properties which would have come under the £1m tax, but avoid the levy if the £2m cut-off is used.


Perhaps before the Budget is announced our politicians should take the time to ensure that they themselves are as transparent as possible in paying their taxes. Otherwise, to coin a phrase, we may find that  ‘we’re all in it together’, but some of us are more ‘in it’ than others.

David Cameron’s constituency home was bought for £1,150,000 in 2006.  Cameron has stood firm against the tax since the idea was first floated, but the increase from £1m to £2m would certainly benefit one of his properties.

The Department for International Development’s Andrew Mitchell reportedly owns a home in London worth £1.6million while Defence Secretary Philip Hammond co-owns a £1million house in Westminster.

The Department for Business, Innovation and Skill’s David Willets owns a London house worth £1.3million.

Even Stephen Hilton, until recently Cameron’s right-hand man, owns two properties worth over £1m. Both fall below the £2m cut-off.

Despite pushes from the Liberal Democrats most MPs in the Conservative Party are anti-mansion tax, claiming that the cost of revaluing properties will be high.

The future of the tax now hangs in the balance as the Daily Mail reported that Communities Secretary Eric Pickles may have deleted a database containing the property details of millions of homes.

Exchequer Secretary David Gauke has spoken out reassuring the public that ‘It simply isn’t right that during tough times- when we’re trying to bring down the deficit- hard working people pay their taxes in full while others avoid contributing their fair share through a range of elaborate schemes.’

Perhaps before the Budget is announced on March 21st our politicians should take the time to ensure that they themselves are as transparent as possible in paying their taxes.

Otherwise, to coin a phrase, we may find that  ‘we’re all in it together’, but some of us are more ‘in it’ than others.